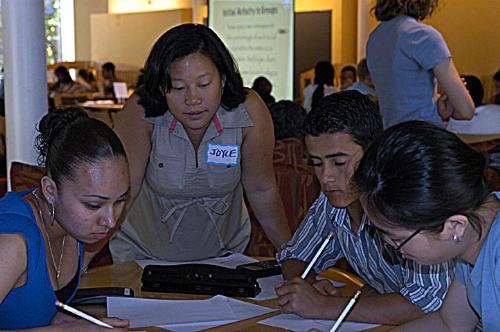 The students began trickling in at 7:45 a.m., 45 minutes before their program actually began.

“You get paid to learn. What’s better than that?” rising 10th-grader John Lewis asked Wednesday, as 30 high school sophomores converged on the Yard for the opening day of the Crimson Summer Academy, a new program for local low-income students.

The director of the three-summer-long educational and mentoring program, Maxine E. Rodbury, called the eagerness to begin orientation Wednesday “amazing” as she watched the students learn to use their new Apple iBook computers.

Along with the computers, and free tuition, the students will received a $200 weekly stipend during each of their three summers and a $3,000 scholarship upon successful completion.

The students come from 14 different local high schools and represent diverse ethnic groups, Rodbury said. To be selected, a student had to be nominated by a high school guidance counselor, submit an application that included essays and complete an interview, Rodbury said. This year, 110 applicants applied for the 30 spots.

“We were looking for highly motivated students who wanted to be part of a rigorous learning community,” said Rodbury, who directs the Harvard Writing Center during the academic year.

The program aims to accept 30 students entering 10th grade each year, Rodbury said, so that by 2006 there will be 90 total students in the program each summer.

Although the Summer Crimson Academy operates under the auspices of the summer school program, its offerings are wholly separate.

In the first summer of the program, students study a unique curriculum—the theme of which is “students as citizens”—at Harvard for four weeks.

Rodbury said the “students as citizens” theme is intended to make participants more aware of the ways in which they behave in the world and to provide interdisciplinary unity among the classes that will be taught.

Each day begins at 8:30 a.m., when Harvard undergraduates, or “mentors,” involved in the program give short presentations on citizenship, said mentor Adam C. Estes ’07.

Most mornings, all students will study quantitative reasoning and science and technology. Tuesdays, though, students will have a double period of digital photography.

Harvard is facilitating the study of that particular field by giving each of the students a new digital camera—which, along with the iBooks, are theirs to keep.

Lewis, who said that the free computer “makes you feel special,” added that he at least would not take the quantitative reasoning class lightly.

“They had a big word for math, so that might be kind of hard,” Lewis said.

After lunch at Annenberg each day, students will take an elective class led by the Harvard undergraduates who also serve as mentors in the program. Electives, which are designed by the mentors, last two weeks each.

Several mentors stressed their desire to expose students to new disciplines and to provide a break from academics.

Kosaka Yada ’07, a member of the men’s basketball team, said he will teach a ballet class.

“Ballet is utilized by a lot of athletes, but a lot of guys think ballet is a girly thing,” Yada said.

Yada added he will also teach a course on international sports, like fencing and cricket, to which children from low-income areas like the inner city might not have been previously exposed.

Adrian Ramirez—who said he would have been sleeping or playing sports had he not been admitted to Crimson Summer Academy—said he looked forward to improving his salsa dancing skills in a class taught by Rosmary Roca ’07.

“I already know a little, but I want to get better,” Ramirez said.

After electives, students take classes in speech and debate, writing and college and career guidance.

Donald E. Fraser, a guidance counselor at Brookline High School who will lead the college and career guidance seminar, said the 10th grade students would set goals for the coming year. He said he would help the students to develop strategies to achieve those goals.

Estes, who is also a Crimson editor, said the mentors will be paid to follow up with their students during the academic year.

“From the mentors’ point of view, the commitment runs very deep,” Estes said. “We’re always going to be on call to these kids.”

Mondays, Wednesdays and Fridays conclude with mentor meetings, in which mentors discuss how the day’s events relate to the theme of “students as citizens.”

The mentors said they were chosen in part because elements of their backgrounds were similar to those of their low-income students.

Yada said his school district in Newport, Ore., was so poor that school was cancelled on Fridays his senior year in high school. But he said teachers made a big impact on him by volunteering their Fridays to teach out of their own homes.

“Coming from a poor public school, a lot of kids were content with staying in town and not doing more than that. Because of the people who influenced me, I was able to move beyond that,” Yada said. “I’d like to assist these students in any way to do the same thing.”

Roca said she hoped she would be able to make connections with students struggling to learn English because she immigrated from Cuba six years ago without knowing a word of English.

Tuesdays and Thursdays, Crimson Summer Academy is extended to 8 p.m. to accommodate speakers from the Harvard faculty who will stress issues relating to citizenship, Rodbury said.

In the coming week, for example, students will be addressed by Cabot Professor of Social Ethics and Pforzheimer Professor Mahzarin R. Banaji on Tuesday, and Associate Professor of Urban Planning Jerold S. Kayden on Thursday.

Students will return to the program for six weeks during their second summer, but that year’s curriculum is not yet determined.

In the third summer, the students are to be guaranteed admission to the regular Harvard Summer School program along with other rising seniors, but will still receive mentoring and financial support from Crimson Summer Academy.

“We are grateful we had a lot of successes to look at, like the programs at Andover and MIT,” Rodbury said. “Harvard is so rich with resources, and we wanted to structure a program that other schools might want to emulate.”

Rodbury said she hopes other schools will take notice of Harvard’s effort to reach out to low-income students, and of some of the program’s more unusual aspects, including interdisciplinarity and the use of individual mentors.

Roca said Crimson Summer Academy has an advantage on the Princeton summer program she attended four years ago because there, students had to pay.

Rodbury said she has already been contacted by other schools interested in piloting Crimson Summer Academy, and Fraser said he was optimistic about the infant program.

“With the resources at Harvard and the team we have assembled, we could make it one of the benchmarks for this type of venture,” Fraser said.