Assistant to the Masters e-mailed combinations to all rising sophomores 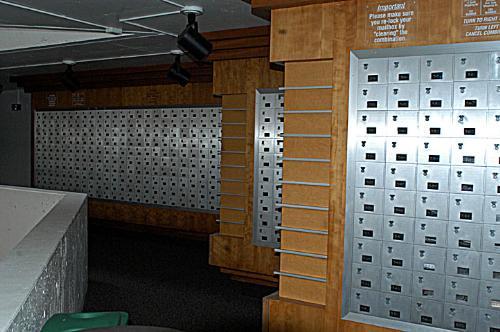 The combinations of all of Mather House’s mailboxes were revealed in an e-mail sent by the assistant to the Masters to the House’s rising sophomores.
By Evan M. Vittor, Crimson Staff Writer

When rising sophomores in Mather House received an e-mail with their much-anticipated rooming assignments on Wednesday, they got some additional information they were not expecting—every other Mather sophomore’s mailbox lock combination.

The spreadsheet that was attached to the e-mail sent by Assistant to the Masters Jacqueline Wheeler included the list of names of all rising sophomores in Mather as well as their assigned room number, mailbox number and, unexpectedly, their mailbox combinations.

Wheeler said she accidentally included the list of combinations after dealing with computer problems.

“The computers have been down for two days, and for some reason when the lists got sorted this wasn’t taken out,” Wheeler said. “This was my error.”

Wheeler said the combinations are normally distributed with students’ room keys during move-in and that she fully expects to have all of the combinations changed prior to the start of the fall semester. Wheeler also said that changing the locks will not cost the House any money.

“It is going to cost us time, that is all,” Wheeler said. “But I fully expect to have it done by the start of school.”

Wheeler said on Wednesday that she would e-mail students, explaining the mistake.

“There will be an e-mail going out saying that their mailbox numbers will be reassigned.”

But the e-mail that Wheeler sent to effected students immediately following The Crimson’s inquiry did not include any mention of the mistake and simply came with the same spreadsheet attached—with the combinations omitted.

Wheeler wrote in the body of the second e-mail that the new attachment included a “corrected room assignment list to replace the previous e-mail that was sent,” but she did not specify what the correction was, nor did she tell students that their mailbox combinations would be reassigned.

Wheeler did write that if students “have concerns regarding any personal information” they should contact her immediately.

Leslie E. Irvine ’07, who is a rising sophomore in Mather, said she found the correction e-mail to be uninformative and misleading.

“I was really confused why they sent two e-mails saying the same thing,” Irvine said. “I couldn’t even tell what was going on, and that was annoying.”

“Are they going to send us another e-mail telling us that was a lie, or are we just supposed to figure that out?” questioned Irvine. “I definitely don’t think they will change all of the combinations.”

John T. Oxtoby ’07, who is also a rising sophomore in Mather, expressed similar dissatisfaction with the handling of the situation.

“I think they should have been more candid with us. I think that just being open and honest is the best way to treat us,” Oxtoby said.

Oxtoby likened Wheeler’s accidental release of the mailbox combinations to the leaking of private information in a well-publicized ongoing rape trial.

“I think it is pretty absurd that something like that could happen,” Oxtoby said. “It seems kind of embarrassing for Mather House and it kind of makes me think of the way the whole Kobe Bryant case is being handled because that Colorado court has messed up so many things.”

Oxtoby did say, though, that he is confident that the combinations will all be changed.

“I have talked to the housing people, and I think that they are competent people and they will make the proper adjustments,” Oxtoby said.

While anyone can currently open the mailboxes with the combinations in the spreadsheet, all of the house mailboxes remain empty over the summer as mail is forwarded to an alternative address provided by each student.

Irvine said she will not consider the situation to be seriously problematic as long as Mather administrators actually change the combinations.

“I don’t think it is a big deal as long as it gets corrected and doesn’t happen again,” Irvine said.

—Staff Writer Evan M. Vittor can be reached at evittor@fas.harvard.edu.