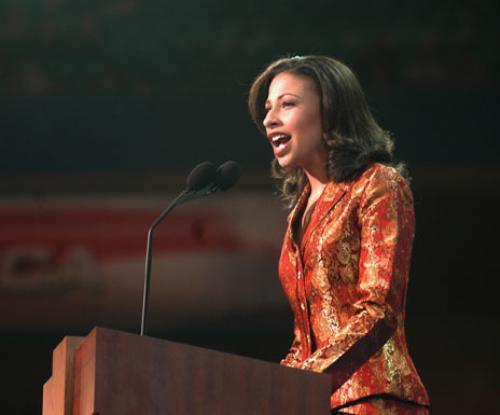 NEW YORK—Less than 24 hours after Erika Harold addressed the Republican National Convention, she was off to first-year orientation at Harvard Law School.

Harold, the 2003 winner of the Miss America pageant, used her four-minute speech on the second day of the Convention to defend President George W. Bush’s faith-based initiatives.

“I’ve seen the triumph of the spirit first hand,” she told the crowd at Madison Square Garden in New York City on Aug. 31.

Harold, who declined the Party’s offer to prepare a speech for her and instead wrote her own, talked about her visit to the Louisiana State Penitentiary, a prison which she said had experienced a 50 percent decline in violence among inmates after it implemented religious programs.

“I wanted to draw upon a personal experience,” she said in an interview after the speech. Harold said that she had become aware of the power of faith-based initiatives while traveling the country for the last two years to speak about youth violence.

“I saw a whole range of ways to solve problems, and faith-based initiatives seemed effective,” she said.

Harold said that she had been impressed that the inmates at the Louisiana prison were not “full of despair.” They built a chapel, ran a radio station that played religious music and gave money to charity.

Although Harold said afterwards that the reform of the prison wasn’t “specifically” due to one of Bush’s initiatives, she said that he had funded similar faith-based programs.

Harold, who is 24 years old and African-American, was asked to address the delegates by Republican National Committee Chairman Ed Gillespie, while touring African-American communities with him.

“I was really shocked since I’m very young,” she said. “I said ‘yes’ right away.”

Harold said that though she did not think her race had played a factor in the decision, she thought it would attract attention.

“The Republican Party has made a concerted effort to broaden its appeal,” she said.

But Harold said that she had not always considered herself a Republican.

“Growing up I was involved in community service, not politics,” she said.

As an undergraduate political science major at the University of Illinois, however, she said that she looked at the issues and joined the GOP.

“I believe in the core principles of small government and personal responsibility,” she said.

Harold said she was not bothered when, as during the other early evening speeches, delegates continued to talk and move about during her address.

“When you are preparing to give the speech, they have rehearsals and the speech coaches tell you that the only people delegates pay attention to are evening speeches,” she said. “You’re not to take it personally.”

Instead, she said that she had been told during two 30-minute practice sessions to target her speech at the television audience.

But at least some of the orange-clad delegates from her native Illinois did pay attention.

“She’s very bright. I think she’ll be in politics one of these days,” said Tom G. Adams, the Mayor of Green Oaks. “She represents a new Republican movement. She speaks for our party very well. [She should] come back to Illinois and run for Congress.”

State Representative Robert W. Churchill said that he had not been present for Harold’s speech but had heard her as the emcee of a Prayer Breakfast, which White House Chief of Staff Andrew Card and former Congressman J.C. Watts also attended.

“She was sharp. She would take the essence of the speech and bring it out and move on,” Churchill said. “I was awestruck.”

Harold said that she isn’t sure what she’ll do after law school but that a political career isn’t out of the question.

Harold added that she won’t continue to campaign for Bush in the fall. “I will be focusing on first year classes.”