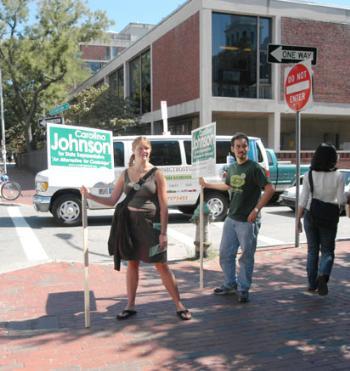 Timothy D. Toomey was poised late last night to once again secure the Democratic nomination for state representative from the 26th Middlesex District, which includes East Cambridge and part of Somerville.

According to unofficial results of the primary election, Toomey, a six-term incumbent who is also a member of the Cambridge City Council, defeated Avi E. Green after a heated campaign in which the candidates sparred on issues ranging from gun control to their campaign finance records.

Yesterday, primary elections were held throughout Massachusetts and several other states for both state and local offices. (Please see story, page 8.)

While Green received over 200 more votes than Toomey in the Somerville precincts, Toomey appeared to prevail thanks to a strong showing in his native Cambridge, according to unofficial results from each city’s election commissions.

In the East Cambridge precincts that he currently represents, Toomey received 2,144 votes, compared to 1,408 for Green.

In the 8th Suffolk District, which includes Cambridgeport and the MIT area as well as Boston’s Back Bay and Beacon Hill neighborhoods, unofficial results showed Martha Walz handily defeating Kristine Glynn for the Democratic nomination.

In Cambridge, Walz received 840 votes and Glynn received 336 for the seat currently occupied by State Rep. Paul C. Demakis ’75. Demakis, who did not run for reelection, endorsed Walz in the race.

In the only other contested race in Cambridge, incumbent James DiPaola easily held onto his post as Middlesex County Sheriff.

In Cambridge, DiPaola received 4,621 votes, far more than his closest challenger, Robert DeMoura, who had 785 votes. Brian Gillis had 611 votes.

Across the county, DiPaola got over 70 percent of the vote.

In a heated race in Boston, incumbent Andrea Cabral defeated City Councilor Stephen Murphy for sheriff of Suffolk County. Cabral, who now faces no Republican challenger in November, will serve another six-year term after becoming the state’s first female sheriff in 2002.

—Material from the Associated Press was used in this report.