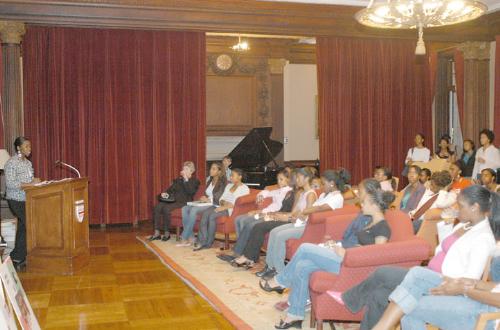 The Association of Black Harvard Women (ABHW) celebrated 30 years of its supportive sisterhood this weekend with workshops, speeches, and performances that emphasized the themes of unity and empowerment.“My grandmother always said, ‘Every time you hear the word forefathers, say ‘five mothers,’” Senior Admissions Officer David L. Evans said at a faculty reception on Friday that kicked off the celebration. His statement, eliciting laughter from the women present, encapsulated the weekend’s central idea of connectedness between past and current ABHW members.

In a speech Saturday morning on “The Future of Women and Minorities at Harvard,” Senior Vice Provost for Faculty Development and Diversity Evelynn M. Hammonds challenged students to hold Harvard accountable for increasing the representation of women in upper-level positions. Hammonds, the highest-ranking African American in the history of Harvard, chaired the Task Force on Women Faculty last year and in her new position is seeking to recruit female and minority candidates for faculty positions across the University.“Multiple reports on the status of women have been done since the 1970s,” Hammonds said. “In the past, no one was held accountable for action.”

University President Lawrence H. Summers introduced Hammonds, discussing the diversification of the Harvard student body. Citing a higher number—8 percent—of African-American students comprising the Class of 2009, Summers then contrasted this number with the fact that Harvard graduated its first African American woman only one century ago.

At a dinner banquet on Saturday night, ABHW presented Bonnie St. John ’86 with the Alberta E. Scott Alumna of the Year award. St. John, who had one leg amputated at a young age, won the silver and bronze medals in downhill skiing at the 1984 Paralympics and was also a Rhodes Scholar. She described how visualizing her own dreams of Olympic glory enabled her to overcome poverty and physical disability to become the first African American woman ever to win an Olympic medal in skiing.

“When you dream big, reality is not going to go along quietly. Reality will fight like hell....Be scared, but do it anyway,” St. John said.

Other speakers cited the numerous recessions and subsequent revitalizations of ABHW as proof of the results perseverance brings.

“Learning about our history was one of the best parts of this weekend,” said ABHW member Brittany N. Castaneda ’07. “Seeing how ABRW became ABHW and how amazing women revitalized it when it was dormant—hopefully we won’t have to revitalize it again and this organization will keep going strong.”

Saturday’s banquet also included artistic re-enactments of the history of black women at Harvard, performed by Expressions Dance Company, ABHW members, and BlackCAST (Community and Student Theater). Depicting ABHW’s evolution throughout the decades, performances ranged from a recitation of the Glenis Redmond’s poem “If I Ain’t African” to an Expressions performance set to the ’90s song “Tootsie Roll.”

In addition to recognizing the history of ABHW and black Harvard students in general, organizers said they hoped this weekend’s celebrations would show the fruition of “a seed that was planted 30 years ago,” according to Natasha S. Alford ’08, who chaired the planning committee along with Jennifer N. Green ’07.

With ABHW alumnae taking respites from their jobs in fields such as law, medicine, business, and media, the event was also geared toward fostering mentoring relationships between past and present members.

Reflecting on the weekend, Trenae N. Simpson ’07 said she felt more confident in her abilities.

“I now truly feel that there is an inherent sisterhood among the Harvard black women and have faith that I can and will go on to accomplish great feats after graduation,” Simpson said. “I believe that I am part of a force greater than myself, a legacy that began 30 years ago.”