Shields Gets Record, Not Win

Record ninth shutout of the season yields only an overtime tie 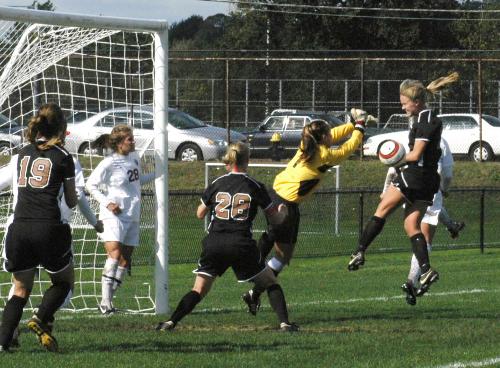 In the Harvard women’s soccer team’s contest against Brown yesterday, co-captain goalie Katie Shields added not one but two ties to her resume—one on the field, and one in the record books.

The latter was of the record-tying sort—with nine shutouts this season, Shields now shares the school record with Tracee Whitley, who registered nine shutouts in 1987. Shields still has four games left to try and break the record.

“I’d obviously rather give up a goal and win the game,” she said. “[Still], it’s nice to get a shutout.”

For a few moments in the second period of overtime, however, it appeared that she hadn’t. After a Brown corner kick, the ball was loose in front of the Harvard goal. Shields moved to cover the ball but got caught in a pack of players, and the ball ended up in the back of the net. Game over.

The Bears’ celebration was short-lived, however. A referee’s whistle—the call, goalkeeper interference. No goal.

“I got a big break from the ref,” Shields said. “That was a foul against me. Well, the girl hit me, so he called a foul, but you never know if a ref’s going to call that. So that was pretty lucky.”

Less than a minute later, Brown almost won the game once again. Bears forward Kathleen Waddell had a point-blank shot on goal, but Shields dove to the ground and smothered the shot.

“Our defense is really, really solid,” freshman forward Erin Wylie said. “We have an amazing keeper and an amazing back four. The last couple of minutes [of overtime], all we wanted to do was score.”

While the defense took care of its business, Wylie teamed with sophomore midfielder Megan Merritt to create the majority of the Harvard scoring chances during the game. The teammates combined for eight of the Crimson’s 14 shots.

One of Harvard’s best chances came in the 76th minute, when Wylie moved down the left side, but her near-post shot sailed into the arms of the Brown goalie.

Earlier, Merritt had a chance when sophomore back Michelle Hull centered a cross to her, but the Bears goalie grabbed Merritt’s header.

“It’s frustrating to not score goals, so we’re working on it,” Crimson coach Stephanie Erickson said. “We realize that our backs and our keeper [are] well organized. Team defending is very good. And our attack isn’t bad. We’re creating chances. They either need to be better chances or we need to put one away.”

Harvard’s forwards were stifled all day by a Brown defense that collapsed on any possession within its zone. Wylie, Merritt and sophomore forward Jamie Greenwald constantly found themselves outnumbered by defenders and had trouble moving the ball deep into the Bears’ end.

“It got a little crowded in the back, especially because they were playing with a sweeper,” Wylie said. “We did what we could, but it’s hard playing with two [forwards].”

“We often don’t even look like a 4-4-2,” Erickson said of the formation that her team employs. “I think it is semantics because Megan Merritt plays like a forward. Our outside backs are just starting to get forward. That’s emerging now in the season.”

With the tie against Brown, the Crimson now has a 1-1-2 record in the Ivy League. With No. 20 Yale currently sitting on a perfect 3-0-0 Ivy record, Harvard no longer controls its own destiny in the race for the Ivy League title.

“A tie’s obviously better than a loss, [but] it does kind of knock us down in the Ivy rankings just because it’s so close this year,” Shields said. “This was a game that we were in and we feel we could have won.”

“We realize [that] anything can happen,” Erickson said of her team’s prospects. “It’s not a done deal, and we’re still in the middle of the pack. The outlook is positive, but it’s never great to feel like you’re not in the driver’s seat.”

Up next for the Crimson is a contest tomorrow at Holy Cross, which is a make-up of a game that was rained out last week. On Saturday, Harvard will take on Princeton at home in what is a must-win game for the Crimson if it wants to have any hope of winning the Ivy League.

—Staff writer Jonathan P. Hay can be reached at hay@fas.harvard.edu.

—Staff writer Carrie H. Petri can be reached at cpetri@fas.harvard.edu.