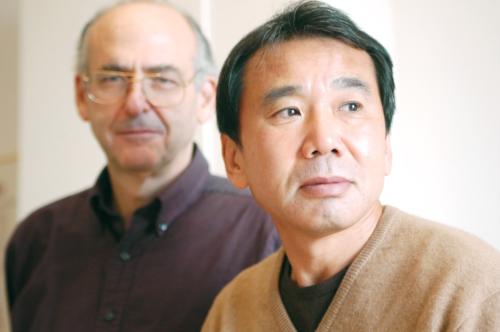 This is not your typical photo shoot. Haruki Murakami smiles at the camera with a discomfort that belies his popstar-like
By Liz C. Goodwin

This is not your typical photo shoot.

Haruki Murakami smiles at the camera with a discomfort that belies his popstar-like fame as one of Japan’s best-selling authors. His pop-culture rich novels featuring intelligent, urban, isolated characters have formed a new literary genre in Japan, its authors called “Murakami’s Children.” Harvard Professor of Japanese Literature Jay Rubin, who has translated several of Murakami’s books into English, poses alongside him. The two chat with each other in Japanese, attempting to dispel the awkward silence interrupted only by the sound of the camera’s flash.

“You should have brought a fan,” Rubin jokes. They both laugh at the incongruity—two bookish types morphing into celebrities with wind-swept hair.

Murakami journeyed to the States over 10 years ago to escape these photo shoots and other trappings of fame. But this time around, it seems that the U.S. will be no refuge from the spotlight. As humble as his novels’ trademark narrators, Murakami seems dazzled at the turnaround.

Murakami says he divides his career into before “Norwegian Wood” and after “Norwegian Wood.” The novel, published in 1987, skyrocketed him into literary fame in Japan, selling over 3 million copies.

All of a sudden, there were Murakami “fans.” They flocked to the Shinjuku nightclub featured in the novel. Tens of thousands of them wrote to him. Norwegian Wood chocolates and guides to the sites mentioned in the book appeared in stores. Sales of the Beatles album with the song “Norwegian Wood,” Rubber Soul, surged.

In May 2003 Murakami told the Guardian: “I was getting famous, but it was a fabrication. Before Norwegian Wood, it was a very cosy position I had. Then my life changed. But I survived it.”

His young fan base found his style refreshing. Almost 20 years later, Murakami has continued to attract young readers, a fact that he is somewhat baffled about. “Honestly, I don’t know anything about kids,” he says.

However, Murakami has no trouble remembering his own youth. “It’s not an easy thing to do, but if I try hard, I could return to those days very vividly,” he says. Always aggressively individual, he felt alienated by the group mentality that he says pervades Japanese society. Instead of following his parents’ wishes and joining the corporate world after graduating from Waseda University in Tokyo, he and his wife opened a jazz club, Peter Cat.

“If you don’t belong anywhere you are nothing [in Japan]. I didn’t want to belong to anywhere when I was young,” he says.

Even now, Murakami isn’t part of the Tokyo-based Japanese literary scene. The outsider mentality pervades his novels, which have ironically propelled him to a position very much in the center of all things literary. His discomfort led camera-shy Murakami to leave the country.

From 1993 to 1995, he lived almost unnoticed in Cambridge as a writer-in-residence at Tufts University. Now, as the Reischauer Institute of Japanese Studies Artist-in-Residence at Harvard, anonymity is harder to come by. “I got kind of famous compared to 10 years ago,” Murakami says, with the faintest trace of surprise in his voice. “I am recognized often in this town of Cambridge.”

It seems that his readers are equally surprised. Murakami gave a talk at MIT last month to a hall packed beyond capacity. The MIT campus police were called in to control the throngs. Many fans that had lined up long before the lecture began were turned away for lack of space, and looked at each other, puzzled.

“I didn’t know he was this popular,” one dismayed fan muttered.

Murakami’s cult status in the U.S. is threatened by this new wave of fans. “I’m very happy that readers think of me as their personal discoveries [in some countries],” Murakami says. “Before Norwegian Wood it was the same situation in Japan.”

And, he says, he is more comfortable with that more low-key level of acclaim. He’s a happy cult star, not a superstar.

Rubin, who started reading Murakami in 1989, has watched his career take off in the U.S. and abroad. “I knew when I read this guy’s work that I was going to like him when I met him,” says Rubin. “Now he’s many, many more times famous than when I got to know him and he’s the same nice guy. He’s a very sweet guy and unpretentious.”

Once scorned by the Japanese literati, Murakami’s novels and short stories have since enchanted critics abroad and at home. In America, critics from the Village Voice to Harper’s have pegged him as Japan’s premier living writer. But few note his distinction as a prolific translator of modern American novels, whose style has greatly influenced his work. Translating is a way for Murakami to get closer to his literary heroes through the text and, occasionally, in real life.

More than 20 years ago, on his first trip to the U.S., Murakami visited Raymond Carver, whose complete works Murakami has put into Japanese. Carver wrote muted, tense short stories and poems, a style reflected in Murakami’s work. Their meeting seems to have had as much of an effect on Murakami as Carver’s prose has had on his style.

“I love the work of Raymond Carver and the person. He’s a beautiful person and it’s my obligation to offer a better translation to the readers,” he says.

According to an account in Rubin’s book on Murakami, Murakami and his wife had a special bed made to accommodate Carver’s large build for his expected visit to Japan. Carver suddenly died of cancer before he could make the trip. “I thought I could do that at any time, and all of a sudden he died, and I was shocked,” Murakami says.

With characteristic humility, Murakami never asked Carver any questions about translation during their meeting, nor did he mention that he was also an author. He speaks of this decision with remorse. “I guess I should have done that,” he says, speaking slowly and thoughtfully, weighing his words. “But I didn’t know he would die so young.”

Rubin is currently translating Murakami’s latest novel, “After Dark.” Their professional relationship has turned into a friendship over the course of fifteen years. While living in the same Cambridge neighborhood, Rubin often consulted Murakami over his translation of “The Wind-Up Bird Chronicle.” In a way, their relationship is like the one that could have blossomed between Carver and Murakami, had he lived.

But, even if he lived next door to Carver, the ever-unassuming Murakami says he would be “nervous” to visit often and bring questions. It doesn’t even seem to occur to him that in many respects he has eclipsed his hero, or that anyone would feel the same sort of reverence for him.

Murakami relaxes through translation and long-distance running. He feels that it renews his creative faculties—a notion that might be hard for anyone who has ever attempted to translate a text or to run a marathon to grasp.

“I don’t take rests,” Murakami says cheerfully. He wakes up at four every morning to write, and always exercises at least an hour a day. He writes fiction for five or six months of the year, and the rest of the time writes nonfiction or translates.

In fact, his stint here at Harvard is, by Murakami standards, almost a vacation.

“Last time I belonged to Tufts University and I had a class from time to time so it was kind of busy, but this time I have no obligations at all,” he says.

One of the few appearances he is scheduled to make at Harvard is a talk on Nov. 18, which will be moderated by Rubin.

“I think he sees this as a time to take it easy, which would probably be a normal workload for most people, and add to his LP collection,” Rubin writes.

Murakami’s increased acclaim in the U.S. has earned him star-like perks—he’s prestigious enough that his very presence is a boon for universities like Harvard—but he remains wary of his fame in the U.S.

“In [big cities] I’m not recognized by people, but here the people talk to me now. ‘Oh, are you Mr. Murakami?’ That sort of thing,” he says. He adds quickly that he is comfortable in Cambridge and laughs off the encounters that are awkward for him. “I want to be as anonymous as possible,” he says. “That is the beauty of being a writer. People want to read your book, but they are not interested in you so much.”

The many books on Murakami and his work—one of them by Rubin—and the plethora of websites dedicated to him contradict Murakami’s hopeful assertion. Whether he likes it or not, Murakami the Man and Murakami the Writer attract a lot of attention. They make Murakami the distant and intriguing Celebrity.

In his personal life and in explaining his work, Murakami shies away from revealing all the details.

“When we talk about a story, the author and the reader have equal rights to access that text,” Murakami says slowly. “You don’t have to admire me as an author. We are equal. It’s a very democratic world, the world of narrative.”

Even in his thoughts on literature, he seeks to take himself off of a literary pedestal—and out of the spotlight.

He just wants to walk around Cambridge anonymously, take public transportation, scour record stores to add to his massive collection, and go on his daily jogs—he is running the New York marathon this week—as the regular person he feels he is.

“Honestly speaking, when I’m writing something I think I’m a writer,” he says, “but when I’m not writing I’m just a man.”