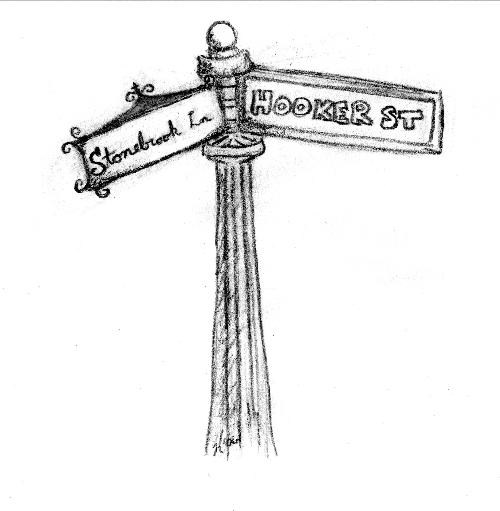 Until recently, 11 residents of Greenwich, Conn. have suffered in silence. For on their mailboxes, in fine rubber-plastic, surrounded with an elaborate embroidery and fantastic flourishes of gold glitter, appear the words, “Hooker Street.” Not Hooker as in Rev. Thomas Hooker, the esteemed colonial minister who helped create the model document for the U.S. Constitution. Hooker as in the family name of the wife of the guy who developed the strip in the late 1960s. Big difference, though not the biggest issue for embarrassed residents.

Imagine meeting the mailman in your black Arctic Tight spandex and listening to him giggle while reading your address. Think of having to wait in shame as your Mac technician chuckles with his colleagues about your personal information. Consider the poor private school children who don’t yet know long division, but who are mocked on the playground for living on “Prostitute Street.” It’s enough to make you want to spend a lot of money, which, fortunately, is possible for these residents of the highest tax bracket. Things have become so bad that a few of them are up in arms, getting petitions signed and calling for town meetings to discuss changing the street name. And they should change it. No one deserves to live that way.

“Stonebrook Lane” seems to be a worthy replacement. This more chaste title was inspired by another spiffy development in Westchester, NY and has been praised by residents as both “innocuous” and “nice.” Not only is the name without connotation, it sounds like it belongs near a country club or a babbling brook, which might boost real estate prices significantly. Further, the proposed name was intelligently designed—“lane” instead of “street”—to avoid unnecessary alliteration, so as not to reflect badly on residents’ poetic sensibilities.

Crime rate will likely decrease as a result of the name change. The Hooker Street sign has been stolen countless times for its novelty value. In response to these annoying pranks, residents have moved the sign high enough so that potential crooks can’t read it. Effective, but more can be done. If the street name was changed to “Stonebrook Lane,” the only people who will want to steal it are senior citizens eager to decorate their backyard ponds.

Just think of the child developmental benefits of a totally benign street sign. Kids will no longer be mocked for living on Hooker Street, but rather for normal things like haircuts and clothing. There is, of course, the danger that they will be ridiculed for having previously lived on Hooker Street until their mommies altered its name on their behalf. Closer empirical analysis reveals, however, that homeowners are wealthy enough to buy their children stuff that will ease the short-term pain caused by such accusations.

Finally, a change in street sign will yield an unimaginable cache of social capital for a people attuned to market fluctuations. The process of revision alone has brought people together against a common enemy, exchanging letters and doing lunch. Once implemented, the change would replace the widespread apprehension with a stone wall of unity in values. Homogeneity counts, and so does community spirit.

Residents might still be concerned about losing their identities. After all, some have lived a satisfying life on Hooker Street since 1969. But they needn’t worry. Just as the Berlin Wall lives on in the minds of the Germans, the Hooker Street sign will forever have a special place in the hearts of Greenwich residents.

In light of these considerations, pay for the change, Ye Residents of Greenwich, and go on with your lives.