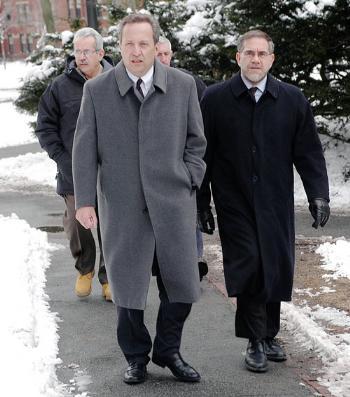 At yesterday’s Faculty meeting, professors dismissed an idea favored by top administrators for a three-person committee to mediate between University President Lawrence H. Summers and the Faculty of Arts and Sciences, criticizing it as undemocratic and prearranged.

During the first hour of the meeting—which was a continuation of last Tuesday’s contentious Faculty meeting—many faculty members continued to criticize Summers’ leadership of the University, though their remarks had a more conciliatory tone than those made last week. Much of the conversation focused on ways Summers could restore power to the Faculty and strengthen professors’ trust in him, and a much-discussed no confidence vote in Summers’ leadership was not held.

Whereas only one professor openly spoke in support of Summers last week, his allies—particularly from the economics department—were vocal yesterday in arguing that he has already begun to change his leadership style in response to Faculty pressure.

Approximately 500 professors packed yesterday’s meeting, which was moved from the Faculty Room, where the monthly meetings are normally held, to Lowell Lecture Hall which can accommodate over twice as many people. Faculty meetings normally draw about 125 professors, but yesterday faculty who had never before attended a meeting found themselves standing for two hours to participate in the much-anticipated session. The outside of Lowell Lecture Hall was mobbed by local and national media seeking to cover the meeting (please see story, above).

More professors had requested to speak at yesterday’s meeting than time would allow, even though the Faculty did extend the meeting from 90 minutes to two hours. Eighteen professors spoke yesterday, in addition to Dean of the Faculty William C. Kirby and Summers.

Kirby announced he will convene a series of informal discussions on these issues with the Faculty and Summers before the next regularly-scheduled Faculty meeting on March 15.

No motion was made to hold a vote of no confidence at today’s meeting.

In response to questions from The Crimson, Professor of Anthropology and of African and African American Studies J. Lorand Matory said he plans to put a motion for a no confidence vote on the docket for the next meeting.

“In fact, I’ll do it right now,” he said after the meeting, adding that he thinks Summers should resign.

The tension and anger that pervaded last week’s meeting was largely absent from yesterday’s continuation of last Tuesday’s session.

The three-person committee proposed at the meeting—which would have been composed of former Dean of the Faculty Jeremy R. Knowles, Thomas Professor of Government and Sociology Theda Skocpol, and Pforzheimer University Professor Sidney Verba ’53—would have worked to “reshape the interactions of the President and the Faculty and to help communicate the Faculty’s concerns to the governing board,” Knowles said.

While many professors said they appreciated the gesture represented by the plan, most applauded when Reid Professor of English and American Literature Philip J. Fisher called the idea undemocratic, effectively killing the proposal.

“I find myself in a meeting that has the slight feeling of an arranged outcome to it,” Fisher said. “It does not seem to me to draw on the many unheard voices in this room.”

Knowles appeared visibly shocked by the rebuke, and Summers seemed visibly disappointed by the plan’s failure.

While Summers usually serves as chair of Faculty meetings, he took the unusual step of asking Kirby to chair today’s meeting.

“My desire is simply to listen,” Summers said.

Summers’ supporters and detractors alike agreed that improvements in the way the president communicates with the Faculty will be necessary if Harvard is to continue to grow under Summers’ leadership.

Conant University Professor Stephen Owen said that much of the Faculty discontent has stemmed from the over-centralization of power in Mass. Hall.

“Perhaps such leadership may direct us more efficiently...but even so, is it worth the loss of the self-governing community whose members” feel a sense of ownership in the university, Owen asked.

Other professors echoed Owen’s comments, and Summers said he plans to respond by working to increase the Faculty’s role in governance.

Other professors told Summers that he had failed to put sufficient faith in the Faculty’s decision-making ability.

“The question is not whether the president can change superficial aspects of his leadership style, but whether he can trust in the expertise of the Faculty,” Professor of Economics Caroline M. Hoxby ’88 said.

Summers said that he is willing to work to reestablish ties with the Faculty.

“I am determined to set a different tone,” Summers said. “I pledge to you that I will seek to listen more, and more carefully, and to temper my words and actions in ways that convey respect and help us work together more harmoniously.”

But Summers added that he would not be able to accede to every Faculty request.

“I cannot serve the University...if in the name of comity I find myself saying yes to every request that is put to me, agreeing to every suggestion so as to avoid giving a sense of alienation,” he said.

For the first time, one professor—Professor of Physics and of Applied Physics Daniel S. Fisher—openly called for Summers to resign yesterday.

But several of Summers’ supporters who spoke at the meeting said that Summers’ abilities far outweigh his flaws.

“In my view, President Summers has brought energy and intelligence” to the position, said Cabot Professor of the Natural Sciences Douglas A. Melton.

Professor of Economics David I. Laibson ’88 expressed the hope that the Faculty could reach a middle ground, in which Summers would remain as president and work to improve his flaws.

“I think we can step back from that brink of holding a vote of no confidence,” Laibson said.

Several professors said they are concerned that this controversy will adversely affect Harvard’s ability to recruit graduate students and professors.

“What do I tell my younger colleagues, particularly women, when they ask me about their future at Harvard?” King and Fairbank Professor of Chinese Society James L. Watson asked. “Do I tell them to ignore what they’ve read with their own eyes and focus instead on promises of reform?”

And Physics Department Chair John Huth said that he does not want female professors to join the Faculty “under the cloud of suspicion” that they have been hired for political, rather than academic, reasons.

Summers told the faculty that while he is strongly committed to reform, they must be patient and wait for the changes to take their effect.

“It is not something that can be fixed or addressed in a day” by a single word or administrative act, Summers said.