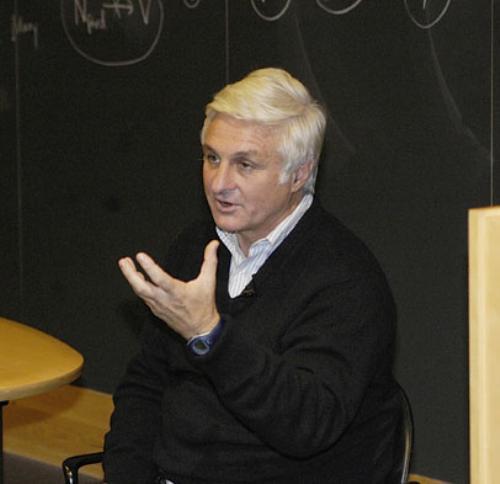 Roberto Canessa speaks yesterday at Boylston Hall. He recounted his tale of being stranded in the Andes for 72 days after surviving a plane crash.
By Nicole B. Urken, Crimson Staff Writer

Students packed into Boylston Hall yesterday to hear the miraculous survival story of plane crash survivor Roberto Canessa, a Uruguyan rugby player who gained celebrity in 1972 after his team’s plane crashed into the Andes mountains.

In his speech, sponsored by Fuerza Latina, Canessa discussed the experience of being stranded for 72 days in freezing cold temperatures and overcoming starvation and avalanches after the crash of the plane, which was carrying Canessa’s rugby team and their families and friends to Chile.

The Aire Forde airplane crash took 13 lives, but many more died in the following days—only 16 survivors were ultimately recovered by helicopter, weeks after official rescue efforts had been halted. The survivors had, famously, been reduced to eating the remains of their dead companions and drinking melted snow to live.

The Andean plane crash was documented in Piers Paul Read’s book, “Alive: The Story of the Andes Survivors” and later adapted in the 1993 film “Alive,” directed by Frank Marshall and starring Ethan Hawke.

Fuerza Latina President Felipe A. Tewes ’06 described the speech as a “unique event” but also one that expressed an important element of the Latin American experience.

“[The survivors] are celebrities in Uruguay, and the crash is something that marked the country,” Tewes said. “The country was very affected by the event...it was kind of a national experience that everyone went through together.”

After showing a vivid video chronicling his experience, Canessa described his personal struggles while stranded in the Andes. With temperatures that reached negative 40 degrees Celsius, “the kind of coldness that hurts your bones,” Canessa said that he realized he could die at any moment.

“I thought what I was seeing couldn’t be real,” Canessa said. “Even though it was snowing so peacefully, the environment was so hostile. We were on our own.”

Though Canessa said that the survivors have received some sensationalist backlash for their cannibalism, he explained that it was a difficult yet but necessary part of surviving.

“Eating human flesh, you feel like you’re the most miserable person on the earth. But in my mind, there was the idea that my friend was giving me a chance of survival that he didn’t have,” Canessa said.

Canessa said that helping others was part of what kept him going each day, despite his exhaustion. “At the end of the day when I felt exhausted, I had an interior peace that came from helping others.”

Canessa described the horror of an avalanche covering the plane as the worst moment of his ordeal.

“I felt completely alone,” he said. Buried two meters under the snow, he said he was filled with desperation.

“Everything is so cold, indifferent, and unpredictable...but there is still hope. To see the blue sky again is something I will never forget,”

Canessa was one of two survivors to hike for 10 days to find help—he and his friend ultimately found a traveler on horseback who alerted a rescue team.

The survivors meet every December 21st to celebrate the day of their discovery.

Canessa joked that he is still frightened of flying, but takes planes anyway, even going so far as to comfort other worried passengers. “Don’t worry,” he tells them. “Planes don’t crash.”