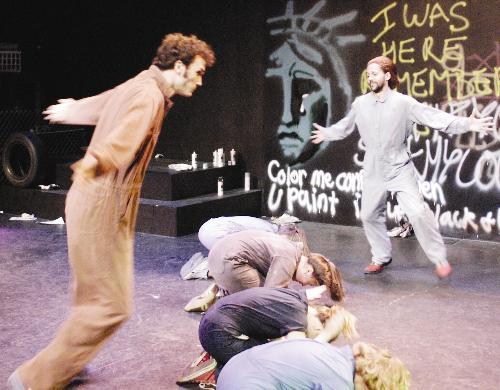 “Graffiti,” presented over the weekend at the Loeb Experimental Theater, innovatively combined spoken word theater, music, and dance to make observations and commentary on urban life.
By Cara B. Eisenpress, Crimson Staff Writer

Spoken towards the end of Graffiti, the performance at the Loeb Experimental Theater this weekend, these words could have been the (ideological) motivation for the show’s production. The heels of tap dancers beating on the stage, the percussionists banging pots and pans, the deejay scratching his records, the projection of spoken word performers’ voices, and the whisper of a graffiti spray can, combine to create an almost deafening roar.

Graffiti, produced by Cathy E. Handy ’06 and directed by Jeffrey A. Barnet ’06, is so varied its only unity seems to be found in the high volume. But beneath the slamming, banging, and tapping, Graffiti is an oddly quiet reflection on cities and their infinite variety.

The graffiti of the title makes intermittent appearances on the black wall at the back of the stage; as different artists leave their mark, the wall accumulates different colors and shapes. While one poet delivers a spoken word performance piece about liberty and equality in the United States, another performer slowly paints the Statue of Liberty with a green spray can. It is fascinating to watch her drawing develop from an oblong triangle to a realistic version of the monument, mixing visual art with performing in an offbeat way. Yet the show’s graffiti element was not exploited to its fullest possibility. It would only have added to the excitement to see more layers of color and shapes blending together.

It is the city then, and not graffiti, which comes through as the main theme as it is introduced by two spoken word performers in the first piece. Clad in hooded-sweatshirts and black beanies, “T-dub” and “Hybrid” alternate in delivering conversation-like poetry, enumerating the city-dweller’s five senses and asking each other, “what’s that I smell/see/hear?” while responding with musings on each sense. The two performers work well together; both are unassuming and casual while maintaining both conversational sense and a steady rhythm and emotional intensity befitting of their poetic dialogue.

As their introduction climaxes, a series of tap dance pieces takes over the central stage. Though the costume style and music range from hip-hop to be-bop, the dancers assume a common attitude in all the pieces. With their hiips thrown forward, shoulders back, they keep up an air of citified cool as they move about the stage. Like mythical hipsters, they mark out their territory, while their body language and facial expression flippantly warn not to mess.

In most of the pieces, in a cycle reminiscent of city streets during and after work-hours, dancers move on and off the stage so that while at one moment it may be crowded with bodies, at the next, it empties, giving two or three dancers the chance to show off more refined steps. And although the tap dancing is well-done and pleasantly rhythmic, it is when the Loeb’s small stage is filled that the dancing makes a statement in line with the introductory spoken word performance.

As the dancers’ arms flail and their heads bop with their own style, their feet keep a common rhythm. The foot pattering is evocative of a rush hour sidewalk of a big city where individuals move at their own pace simultaneous to their roles as part of a larger group.

The percussionists accompany the dancers in several pieces, but left to themselves, they innovatively connect their instrumental specialties to city life. During their solo number, they sit at a long table set with metal bowls, plates, drinking glasses, dining hall trays, whisks, and even a cheese grater. They play this tableware with drumsticks, utensils, and their hands, creating a varied and loud beat while pretending to be at a restaurant. When dancers dressed as waitresses clear their places, grabbing the “instruments” away, the drummers just pound on the tables. Although the idea may seem reminiscent of the hit broadways show Stomp, the interspersion of this scene within the rest of the performance creates a show-stopping theatricality that sticks in the mind.

At times the drummers beat in unison, maintaining a clean sound, while at others they synthesize complicated rounds and sound patterns that border on the noise, and are like the noise of a city, diverse but regular.

The percussionists were a part of the first act to elicit equivalent noise from the audience. After their energetic performance, audience members applauded enthusiastically and loudly, and several people cheered in high-pitched voices.

Perhaps audience response reached its peak when Graffiti’s finale degenerated into an interactive dance party. At that time, performers pulled audience members on to the stage until it became a mess of different groups and individuals, each moving in their own way but still contained by the space and unified by the loud music. For the moment, the Loeb Ex was transformed into its own mini-city, one definitely worth the visit.

—Reviewer Cara B. Eisenpress can be reached at eisenpr@fas.harvard.edu.