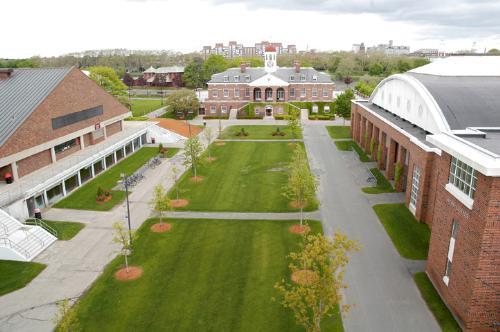 A year after a faculty committee recommended that Harvard’s new campus in Allston include up to eight undergraduate Houses, at least three different Charles River sites—led by the current site of College athletic facilities­—are being considered for the Houses.

Five members of the University’s Allston Master Planning Advisory Committee (MPAC) said that the options for undergraduate houses across the river include building Houses where the athletic facilities currently sit between Soldiers Field Road and the Harvard Stadium, converting the Harvard Business School’s (HBS) Georgian-style riverfront housing into undergraduate residences, or constructing new Houses in the area between the 1 Western Ave. graduate housing complex and the HBS campus.

None of the committee members who identified the sites would allow their names to be used in this article, saying that the deliberations of the committee—which reviews plans for the Allston campus—are confidential.

Kathy Spiegelman, director of the Allston Initiative and chief University planner, would not comment on the specific locations that planners have proposed for undergraduate housing.

“All of the riverfront edge of Harvard’s property in Allston is being looked at,” she said. Spiegelman added that planners would most likely release a preliminary report in the next couple of weeks that would outline specific options for the new campus in Allston.

Professor in Practice of Urban Design Alex Krieger, a member of the MPAC, said that the report would include information on potential sites for science complexes and graduate school housing in Allston.

“When we put out a progress report, we’ll be able to share with people the options,” Spiegelman said. “We definitely want to open up a conversation and discussion about the pros and cons of different options.”

Construction at any of the three sites would face a number of potential hurdles.

The most frequently touted location for undergraduate housing—the area between the stadium and the river—would involve the relocation of several existing athletic buildings.

But Director of Athletics Robert L. Scalise, who is also a member of the MPAC, said that the potential benefit of new athletic facilities and proximity to undergraduates might outweigh the cost of having some athletic facilities move farther away from the river.

“We are trying to be good citizens,” he said. “Part of that is talking to our alums, faculty, and students....We’re open and we’re trying to do what is best for the University of the future.”

He added that the current athletic facilities do not take full advantage of their riverfront location.

“I could understand the point that there could actually be buildings that could take advantage of that view,” he said.

The flexibility of planners to construct on much of the land occupied by the athletic facilities and fields may be limited. Harvard Stadium is a national landmark, but Spiegelman said the designation does not prevent the University from altering it.

“It doesn’t mean you can’t do something with the building,” she said.

When celebrated poet Henry Wadsworth Longfellow, who was a professor at Harvard, donated land to the University in 1870, he mandated that the view from his house on Mount Auburn Street across the river to Allston be unobstructed.

According to Harvard’s 1869-1870 Annual Report, “By the conditions of the gift the tract is to be kept open, or is to be used as the site of such buildings only as are not inconsistent with its use as gardens, public walks, or ornamental grounds.”

That mandate limits construction on much of the land north of Harvard Stadium, where the intramural fields currently sit.

David Westfall, who is the Schipper professor of law and the Gray professor of law, wrote in an e-mail that although he was not aware of the details of the Longfellow bequest, he imagined “that it would not be easy” to get around the restriction.

If HBS’s dormitories on the Charles River were converted into undergraduate housing, they might not be large enough to meet the College’s stated goal of having at least three undergraduate Houses in Allston.

According to David Lampe, the executive director of marketing and communications at HBS, the school has only 425 beds in its buildings on the river. He added that the set-up of the housing was “simple dormitory rooms [off] hallways.”

“It would take a fair amount of renovation to make our existing dorms into Harvard Houses, since they’re dormitories, not Houses,” Lampe said. “They don’t have places for kitchens, tutors, or masters.”

Currently, the average undergraduate House has 395 beds, according to a report issued last year by the College.

Lampe added that the presence of undergraduates on the business school campus would also disrupt HBS’s “self-contained community for business” and force the school to find an alternative location to house its MBA students.

“It’s not our favorite option but we recognize it’s a viable one,” he said.

The construction of undergraduate housing at the third site—between the 1 Western Ave. graduate housing complex and the HBS campus—might also force several HBS buildings to relocate.

While there is a vacant field at the site, the land is constrained by HBS buildings on one side and by graduate student housing on the other. But the option could be combined with converting HBS dorms to create an undergraduate presence directly across the Charles from the current undergraduate Houses on the north side of the river.

MPAC members said that additional sites for undergraduate housing might also be under consideration. Administrators have said that they strongly favor putting new Houses along the river, rather than farther into Allston.

Harvard owns at least one other riverfront property in Allston—the land currently occupied by the Genzyme plant just south of Western Avenue. But Genzyme has a long-term lease on that site until 2057.

Divinity School Dean William A. Graham, a member of the MPAC, said that planners had agreed that if any University facilities in Allston had to be relocated, the replacement facilities would offer additional advantages to the moving constituency.

“Our principle is that everything should not only be replaced but enhanced,” he said. “Any displacement of any buildings should involve a rebuilding of those same buildings that actually provided at least as good or better facilities and access.”

THE WINDING AND LONG ROAD

Several members of the MPAC contacted for this article cautioned that not only the site, but even the presence of undergraduates in Allston is still up in the air.

Nevertheless, undergraduate Houses have served as the anchor for the University’s Allston plans, which were first made public in an October 2003 letter to the community from University President Lawrence H. Summers. The Allston undergraduate life task force—one of four task forces formed by Summers last year to flesh out a more concrete vision for Allston—embraced undergraduate houses in Allston, recommending that Harvard relocate Quad houses to Allston and potentially construct new Houses as well.

“We were unanimous [that one of the] basic principles is that the way you make Allston integral to a new Harvard would be to have an undergraduate presence there,” said Graham, who co-chaired the task force with Scalise. “Without [it], Allston is being set up to be a satellite.”

“The task force got very excited about the idea,” Provost Steven E. Hyman told The Crimson last April. “Undergraduates kind of give life to everything.”

The Task Force report stated that “Houses could theoretically be built in several locations in Allston (along the river, along Western Avenue, along North Harvard St.).”

Matthew W. Mahan ’05, the former president of the Undergraduate Council who served on the task force, said that the possible sites on North Harvard Street included Ohiri Field and the McCurdy Track.

Daniel Lieberman, a professor of anthropology who served on the task force, said that the committee did not analyze specific sites.

“The committee was looking at general ideas,” he said. “Most people thought that the ultimate solution was to put [new Houses] along the river. Where along the river exactly—we did not deal with that.”

Mahan said that since proximity to the rest of the campus was key, the committee had agreed that a site on the river was essential.

“The ideal location would include taking over a couple of front buildings of the business school,” he said. “The next best spot is where the playing fields are [on the river].”

The planning and design firm Cooper, Robertson & Partners was hired last June to develop a master plan based on the recommendations from the faculty task forces. In October, the MPAC was formed to review the planning firm’s work, including the proposals for undergraduate housing.

David McGregor, the managing partner of Cooper, Robertson & Partners did not return several calls for comment.

Two important constituencies—the student body and the Allston community—will have to be won over if undergraduate Houses in Allston are to become a successful reality.

Chair of the Undergraduate Council’s Student Affairs Committee Aaron D. Chadbourne ’06 said that he is concerned that students living in Allston might feel alienated from the rest of the campus.

“If the University…is going to extend the College in Allston, the number one consideration is that it feels [like] a connected campus, and as it stands, putting Houses across river is not going to create a unified campus,” he said.

Chadbourne said that planners had to prioritize transportation planning in order to connect the two sides of the river.

“Unless you have transportation, it’s irresponsible to talk about putting Houses there,” he said. “You have to cross the river, but then you also have to get to the academic buildings.”

Indeed, planners have proposed ways of integrating any new buildings in Allston with the rest of the University.

At an April 28 Harvard-Allston community meeting, McGregor said that planners had considered building a new crossing of the Charles River.

The University will also have to face community members who are skeptical about Harvard’s plans to put undergraduates in Allston.

“I don’t know if the community has said that it wants any students living in Allston. We don’t really want student housing here,” said Paul Berkeley, a member of the Harvard Allston Campus Task Force, the community group that reviews the University’s large-scale projects in Allston. “Harvard task forces might say this, but the community task force did not. The Harvard-commissioned task force has never met with us.”

“It will have to be reviewed by the community before anything happens,” added Ray Mellone, who chairs the task force.

Nevertheless, several other Allston community leaders contacted for this article said that as long as the new Houses stayed on the river, away from residential neighborhoods, the community would probably approve the proposal.