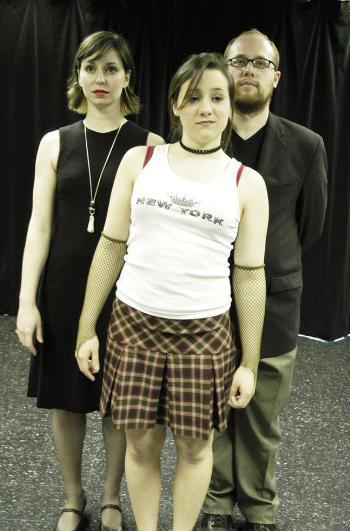 Arthur Kopit’s “Y2K” was written in 1999, when the fears that a massive technological glitch would bring about worldwide destruction were at their height. Though the titular epoch has passed, the story about a young “power couple” whose identities are stolen by a somewhat maddened young computer hacker remains truthful, frightening and, ultimately, thrilling.

In featuring Marielle E. Woods ’08 as the computer hacker—a role that was written for a young male in the original script—the play is taking some adventurous interpretive chances. It is a particularly daring switch because one of the play’s central conceits is an ambiguity over whether or not the hacker has a sexual relationship with the wife of the couple.

Producer Anne T. Hilby ’05 finds that “audiences have reacted much more strongly to the hacker’s sexually explicit language when coming from a female rather than a male.” She adds, “This reflects the gender bias and assumptions that Gustavo, the director, has raised in the show.”

“Y2K” remains a viable backdrop for a production in the twenty-first century because the phenomenon was “not a problem of zeros and ones but of adjusting to new ways of seeing the world,” says director, House Tutor, and graduate student in the English department Gustavo S. Turner. In fact, Turner says that the play is “much more powerful” now, as it will cause “people to reflect on what it means to have a safe stable identity in the twenty-first century.”

While Turner concedes that he uses a “sexually explicit script,” he explains that “we are just using it matter-of-factly, not for shock value.”

As for the setting of the production in the Loeb Experimental Theatre, Turner says, “[Y2K]” is an ideal show for the Ex” because “it is straight theater and at the same time, there are a lot of nuances.”

Although in previous performances of the noted play, Turner says, the computer hacker is given a “dream-like” quality, drifting on and off of the stage, he and set designer Matthew J. Ferrante ’05 gave the character new life. This was accomplished by creating a personal space for Woods on the balcony, while “taking full advantage of the back box” for the rest of the players.

Turner describes the production’s musical tone as somewhere in the genre of “late ’90s Japanese hardcore.” According to him, the musical styling, created by sound designer Jim L. Fingal ’05, reflects the relationship between the “two sets of characters with completely different world views” by using diverse musical juxtapositions in a “play of light and dark music.” As no play about the turn of the 21st century could be complete without Prince’s “1999,” Turner and Hilby promise that they are “doing something fun” with the popular tune.

Above all, Turner hopes his revival of the play will get people thinking. Turner himself names the most poignant piece of dialogue to be when “the hacker mouths off a bunch of computer lingo and then says, ‘If you didn’t understand a word I said, [and] don’t go near it, it’ll do you in. A hint: learn it.’” It is an ethos that continues to be relevant as the technology continues to expand.