Summers emphasizes Harvard's role in globalized world in his remarks 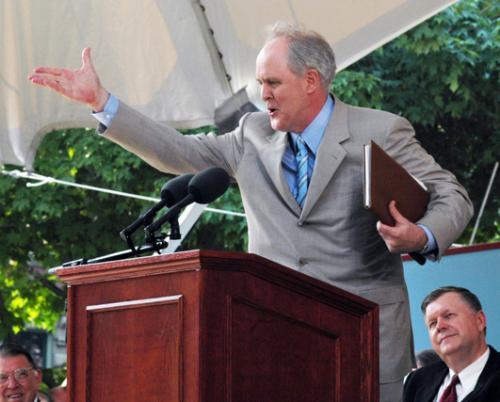 Actor John Lithgow ’67 put to rest concerns yesterday that the podium of Commencement’s afternoon exercises—usually reserved for political figures—could not handle an artist.

Lithgow, the first professional actor to ever speak at a Harvard Commencement, entertained and amused an audience of thousands with his yet-unpublished children’s story about a mouse that goes to college.

The light-hearted tale, set at Harvard and dedicated to the Class of 2005, garnered Lithgow a standing ovation and a request to return to the podium for an encore.

In the only reference to the firestorm over University President Lawrence H. Summers’ leadership in yesterday’s afternoon exercises, Lithgow presented the story of Mahalia Mouse as “oil over troubled waters.”

“Your campus was roiled by a bitter, divisive controversy in the last semester of your undergraduate years,” he says. “The book is my cheerful and constructive response to all the turbulence: Mahalia Mouse, you see, studies science.”

Summers, who preceded Lithgow with a more serious speech on Harvard’s global role, joined the crowd in laughter.

Lithgow says he will donate his advance from the book, which has been accepted for publication, to the senior class gift.

As a member of the Board of Overseers—one of the University’s two governing bodies—from 1989 to 1995, Lithgow conceived of and led the push culminating in the establishment of Harvard’s annual Arts First weekend in 1993, and he returns to Harvard each year for the event. Harvard’s Arts First medal, awarded to a University graduate who has made a significant contribution to the arts, is also a brainchild of Lithgow’s.

A well-known advocate of childhood literacy who is currently writing a series of children’s books, Lithgow emphasized the importance of art in society in his speech’s more serious moments.

“I hold the fierce conviction that the arts are indispensable to a healthy society but everywhere I see evidence that support for the Arts is foundering, even under assault,” Lithgow said, to the loudest applause of the afternoon.

“That’s the easiest round of applause I ever got,” he said. “Talk about self-evident.”

Lithgow implored the Class of 2005 to be “creative, to be useful, to be practical and to be generous” and to find ways to mingle art and commerce for the greater good.

Lithgow was still able to poke fun at his non-traditional path to Commencement Day speaker. A history and literature concentrator during his years at Harvard, Lithgow said he kept his Harvard degree a secret while trying to find work as an actor.

“Somehow it never seemed to come in all that handy when I was auditioning for a soap opera or a potato chip commercial,” he said.

When asked back to the podium at the end of his speech, Lithgow sang lyrics from his children’s book “I’m a Manatee” to the amusement of the audience.

“I’m a manatee...no difference between my face and fann-atee,” Lithgow sang.

“I knew I shouldn’t have done this,” he added after forgetting the words half-way through the song.

Matthew W. Mahan ’05, former president of the Undergraduate Council, said he’s glad that Lithgow was chosen, despite some disgruntlement among seniors that Lithgow wasn’t as high-profile as some previous Commencement Day speakers. Kofi Annan, the Secretary-General of the United Nations, spoke last year, and former Mexican President Ernesto Zedillo addressed graduates in 2003.

“I thought the book dedication was incredible and I’m glad that they finally had an artist speak,” Mahan said. “I think it’s important that we have a well-rounded group of speakers for Commencement.”

Lithgow, who is currently starring in Broadway’s “Dirty Rotten Scoundrels,” is best-known for his role as extraterrestrial-in-disguise Dr. Dick Solomon on NBC’s 1990s sitcom “3rd Rock From the Sun.”

“I’ve seen him on ‘3rd Rock From the Sun’ and I knew he was very good, but I didn’t know that he could perform that well—he has a wonderful use of words,” said Dick Diroll ’50, at Harvard for his 55th reunion.

In his afternoon address, Summers reiterated a hallmark of his agenda: Harvard’s global responsibility.

Summers garnered a standing ovation as soon as he was introduced. Administrators and higher-ups on the platform behind him stood up almost in unison, with many in the audience following soon after.

Summers said that whether or not the 21st century will result in “less brutality and more human freedom” will depend primarily on ideas, and the “wisdom of people who are in positions to use them.”

“At a time when the United States has never been so misunderstood by the rest of the world, and quite likely has never been so misunderstanding of the rest of the world, we have a special need to prepare our students with international understanding and a lifetime commitment to comprehending changing global realities,” he said.

It is Harvard’s role, Summers said, to foster international understanding by expanding its presence abroad and ensuring its students develop a global outlook while at Harvard.

With Dean of the Faculty William C. Kirby’s “leadership and that of his colleagues, I am pleased to report that we are approaching the day when, like the swimming test for a previous generation of Harvard undergraduates, an international experience will be the norm and expectation for Harvard undergraduates,” Summers said.

“Let us build on these steps and look forward to the day when there will be Harvard offices supporting the foreign study of our students, the research of our faculty, the dissemination of our ideas, and the involvement of our alumni in every part of the world,” he said.

Senior Lecturer on Economics Jeffrey Wolcowitz—who served as the primary architects of last year’s curricular review report, which called for undergraduates to have a “significant international experience”—called Summers’ vision “right on.”

Summers did omit two personal anecdotes that appeared in the prepared text of his speech. At one point, this made for a confusing reference back to a point he had not actually made.

“I mentioned a few minutes ago—actually, I didn’t,” he said. “I was going to, but then I cut it.”