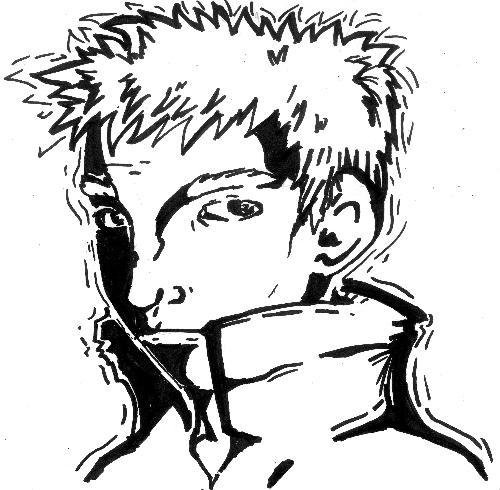 Maybe a year ago, I wrote a short piece article decrying a recent fashion trend. The trend—girls exhibiting their, um, let’s call it butt cleavage, through the use of low-rise jeans and a complete lack of proper decency—had swept across campus and the country. Denim designers and fashionistas everywhere had spawned lines of clothing tailored specifically for this purpose. Magnitude of butt cleavage across females being mostly equal, at least compared to the normal kind of cleavage, the playing field was finally leveled.

A repulsive trend, to be sure, but at least anyone with low-rise, bootcut jeans readily available could participate. It was a trend predicated on equality. In a world filled with Diesel, Armani Exchange, and FCUK, it was a breath of fresh air.

For better or for worse, however, butt cleavage fizzled out this summer. Its replacement is, to some, the most horrifying fashion trend since Europe adopted the merkin in the 1600s to prevent lice. The popped collar is ascendant.

In years past, golfers, sailors, and other sportsmen found it expedient to sport collared shirts. Constantly exposed to rain and sun, the owners of these collars sometimes “popped” them for protection. Unbeknownst to many today, the popped collar originated with Rene Lacoste, who, in 1929, wore his newly-invented short-sleeve polo shirt with the collar popped to protect against the sun while playing tennis. With the rise of the unfriendly-to-popping, indoor leisure style of Ralph Lauren in the 1960s, collar poppers had their first natural enemies.

The conflict began on a college campus, when, in 1968, collar popping was recognized by students in Princeton, New Jersey. They erected a vast Aztec-style temple complex dedicated to the popped collar on the site of today’s Frist Center. The conflict even extended to popular heroes of the day. Alan Shepard (from New Hampshire) popped his collar during his post-orbit press conference. John Glenn (from Ohio) did not. By the 1980s, popping one’s collar had become a fashion statement for sailors and rowers—golfers had given it up once sweater sets became all the rage. As Lacoste regained market share throughout the decade, so the power of the collar poppers grew.

Worshippers on wind-born pilgrimages to New Jersey packed the Princeton temple, and the blood of the unpopped spilled down the temple steps towards the fountain outside of the Woodrow Wilson School of Government. Officials blamed the crimson-dyed waters on pranksters from Rutgers. After the construction of the Frist Center covered the sacrificial altar with a cafeteria, student center, and classrooms, Princeton students set up competing popped and unpopped Facebook groups to continue the strife. Things seemed contained geographically, but it was not long until the conflict would widen beyond the Garden State. As of four summers ago, popped collars seemed an occasional oddity, something practiced by sailors, Cape-Codders and Tigers—rejected by the bulk of the country as indicative of preppiness, elitism, and general mental deficiency.

Thanks to rappers Usher and E-40, who referenced the popped polos in their songs, Lacoste and its collar-popping ways gained adherents from heretofore untapped markets. The pressure was such that the lines between Ralph Lauren non-poppers and Lacoste poppers began to blur. Fake L.A. gangstas of all races began to pop their collars, whether pony or alligator, in imitation of their idols, even though collar-popping was a decidedly East-Siiiide practice.

And now, all I see are popped collars.

I’m sitting in a cottage on Nantucket right now, watching thirteen13-year-old collar poppers skipping merrily down the pebbled roads. All of this (mostly fake) history makes me wonder whether anyone really knows what collar popping even stands for anymore. After all, collar popping can’t really be that elitist, or that horrifying, if Usher endorses it. What was avant-garde in 1929 is now so quotidien. Even though some collar poppers may still be only preppier FCUK’ers, the elitism that the popped collar once signified is dead. And that makes us non-collar poppers feel so much more superior.