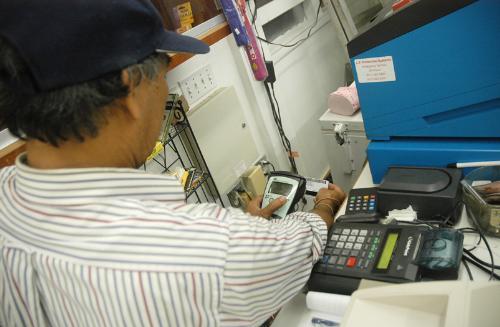 Pritam S. Saini, who goes by the name “Tony,” uses his card reader to test a driver’s license to see whether it is a fake. The machine works on licenses from all 50 states.
By Anna M. Friedman, Crimson Staff Writer

The new owner of Louie’s Superette hopes to attract students in search of daytime caffeine pick-me-ups, not just late-night beer and vodka fixes.

Pritam S. Saini, who goes by the name “Tony,” said this week that he plans to expand the food and beverage selection at the convenience store near Mather House.

Although alcohol has traditionally comprised about half of the store’s sales, several changes Saini proposes could make it more difficult for students to purchase liquor at Louie’s. He has already raised the price of alcohol to adjust for market prices and installed a machine that detects fake I.D.’s.

Former owner and popular campus personality Cheng-san Chen sold his business to Saini early this summer, after operating the store for 18 years. Chen was penalized by police in 2004 for serving alcohol to minors—and he faced a subsequent decline in sales. He was also the victim of armed robberies in January and March 2004.

Saini officially held a Grand Reopening on Sept. 4, after more than a month of renovations.

“I want everything up-to-date,” said Saini. He has already completely redone the floors, painted the walls, and installed new shelving. He also now accepts credit cards.

“I’m excited to be shopping here,” he added.

Saini, who hopes to attract more students and local families, has big plans for his small convenience store. He’s already added wares like earrings, sunglasses, and perfume to his inventory. He also plans to add slushee, ice cream, and cappuccino machines, a salad and sandwich bar, and even a produce stand. He said he hopes to complete these changes by the end of October.

Some Mather residents said they look forward to shopping at Louie’s once it expands its selection, but others said they considered Saini’s culinary plans superfluous to their daily needs. “I usually would just go to the dining hall instead,” said Marcus A. Janke ’08.

Saini, who said he is eager to adapt his store to serve students’ needs, also plans on installing a suggestion box to receive student input.

“I tell students that if you have anything you need I’ll bring it for you,” Saini said. He’s already responded to requests for items as obscure as ping-pong balls, he said.

Chen will remain the landlord of the property, and Saini said the former owner has visited to offer advice.

Louie’s is the third convenience store that Saini has run. Before immigrating to Boston in 1995, he owned a confectionery store in India. He continues to operate a superette in Malden, Mass.