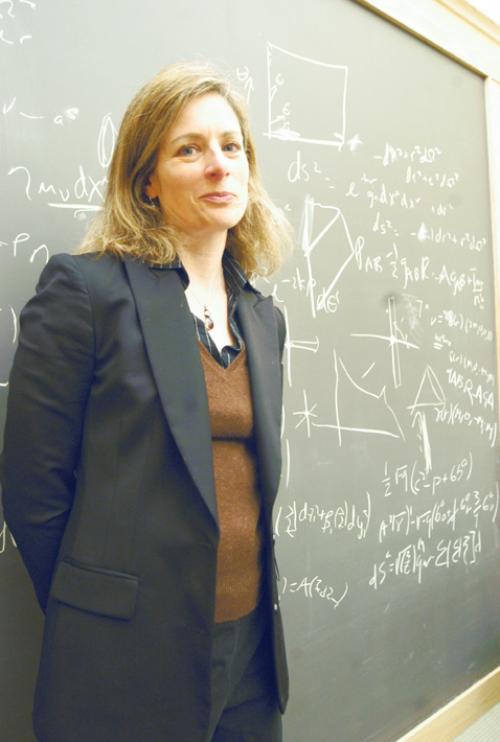 Professor of Physics Lisa Randall ’83, recently named one of Newsweek’s most influential people of 2006, rose to the top with her theories on gravity.
By Adrian J. Smith, Crimson Staff Writer

Professor of Physics Lisa Randall ’83 saw how strong gravity could be during a climbing fall in New Hampshire two years ago.

She was performing a “challenging” move when she took a surprising fall, she says. Instead of stopping the fall, her support ropes pulled her at the wrong moment and her heel slammed into the rock.

The accident that put her on crutches for several months should not have happened, Randall says.

“It was bad luck. It was a hard climb and I was just trying out a move,” Randall says.

Although the accident prevented her from rock climbing for a while, it did not stop her ascent in the field of theoretical physics. Randall has gathered the attention of scientists and the media for possibly answering a question that has long baffled physicists—why gravity is so much weaker than other forces.

Randall believes the answer to what physicists call the hierarchy problem may lie outside our visible world. Gravity may be weak compared to forces such as electromagnetism, because it is concentrated in another dimension.

Along with Raman Sundrum of Johns Hopkins University, she published two papers in 1999 that have changed how physicists think about the structure of space. Randall proposed that the universe has more than four dimensions (three of space and one of time) and that these extra dimensions could be infinitely large.

Randall has influenced string theorists, who also claim that extra dimensions exist. String theory is a model of physics in which building blocks are one-dimensional objects called strings instead of zero-dimensional particles like electrons.

Until now, string theorists have accounted for the fact that we can detect only three dimensions by claiming that the extra dimensions are curled up into infinitesimal loops and thus imperceptible.

Randall claims that these dimensions could be infinitely large provided that space has a warped geometry. In effect, we could be living in a three-dimensional pocket of higher dimensional space. Randall refers to these pockets in space as branes. Like a bead on a wire that can only move along one dimension, a brane may restrict our motion to three dimensions although other dimensions exist.

With branes, Randall discovered a way to explain how extra dimensions could be hidden and infinitely large. Because the math behind her theory works, theoretical physicists have paid close attention to her research.

While working with Sundrum, Randall stumbled on a possible answer to why gravity is so weak compared to other forces. Gravity may not appear weak to the casual observer. But, as Randall explained to the crowd at a Science Center Research Lecture last month, a small magnet holding a paper clip resists the gravitational pull of the entire Earth.

Randall was dealing with another problem before she considered the hierarchy problem: examining supersymmetry, a theory that claims every fundamental particle has a partner (like an electron with a negative charge and a positron with an equivalent positive charge).

“What happens is that you end up with interactions you really don’t want to have. It is really hard to write down theories where those interactions don’t occur,” Randall says.

In trying to better understand supersymmetry, Randall discovered that extra dimensions of space could solve its problems. If other dimensions exist, then it becomes possible to separate particles and to prevent unwanted interactions.

Randall’s theory of extra dimensions also would answer the hierarchy problem. With the help of Andreas Karch of the University of Washington, Randall found that gravity could be concentrated somewhere in an extra dimension.

“Gravity is so strongly peaked near the brane that gravity doesn’t leak away,” Randall says. “If you are anywhere except the brane where gravity is concentrated, you would see gravity as very weak.”

‘NOT A TALENT THAT YOU NEED’

Randall continued to work on her book after the climbing accident.

Lying on a couch with her leg raised to prevent infection, she started to rewrite her book “Warped Passages: Unraveling the Mysteries of the Universe’s Hidden Dimensions.” The book presents her research on the geometry of space, extra dimensions, and gravity in an entertaining style.

Andrew Strominger, professor of physics at Harvard and a string theorist, says he was impressed by the quality of the book.

“It was a side of her I hadn’t seen before,” Strominger says, “I didn’t know that she could write so well. It is not a talent that you need as a theoretical physicist.”

“Warped Passages” has received critical acclaim and has also attracted the general public to the complex field of theoretical physics. It was among the New York Times’ “100 Notable Books of the Year” for 2005 and Amazon.com’s “Top Ten in Science.” Her book has led her to give many public talks, including speeches at the Smithsonian, New York’s American Museum of Natural History, and Boston’s Museum of Science.

She also presented her ideas to a packed lecture hall at her Science Center lecture, part of a series promoting the research of Harvard’s most prominent scientists.

Randall has always been a science prodigy.

While attending Stuyvesant High School in New York, she won the Westinghouse Science Talent Search—now known as the Intel Science Talent Search—with a number theory project on complex numbers. After Stuyvesant, Randall entered Harvard College in 1980 and graduated in three years as a physics concentrator. She says that Expos was one of her favorite classes, although she described it as “challenging.”

While Randall was always interested in physics, a summer internship before her final year at the College narrowed her focus. She spent the summer working for Fermi National Accelerator Laboratory, a high energy particle accelerator near Chicago, Ill.

“That made me interested in particle physics. It then became clear as a graduate student what I wanted to do,” Randall says.

Randall returned to Harvard for graduate school, where her Ph.D. advisor was Mallinckrodt Professor of Physics Howard Georgi ’68.

Randall was the first tenured woman in the physics department of Princeton University and the first female theorist at the Massachusetts Institute of Technology, according to the Boston Herald. In 2001, Randall returned to Harvard where she became the third woman to get tenure in physics, according to the Times.

Randall, who teaches Physics 253a, “Quantum Field Theory I” for first-year graduate students, says that she enjoys working at Harvard.

“Students here are great, so it is very rewarding to teach at Harvard,” Randall says.

Her colleagues at Harvard praise her instinctual approach to physics—many say she seems to know the answers beforehand and then attempts to prove them.

“She is very intuitive. She often understands things in her own mind before she is able to formulate it mathematically,” Strominger says.

Karch, who worked with Randall on the hierarchy problem, says that he was impressed by her knack for physics.

“Randall is full of interesting ideas, often too many to work out all of them,” Karch writes in an e-mail. “She usually knows the right answer to begin with and then needs to spend some time trying to convince others (and herself) that it is really the right answer.”

Randall says that she often has an incomplete sense of her results before starting her research.

“People sometimes say that I have the ideas before the math, but many times that’s not really true,” Randall says. “Sometimes we have some of the math, but I then figure out what it means. That was the case with the work on infinite extra dimensions.”

Randall hopes that the Large Hadron Collider, a giant particle accelerator near Geneva, Switzerland will test her theories. Colliding proton beams at a combined energy of 14 trillion electron volts, it will start operation in 2007. The collider could produce particles such as the sought-after graviton believed to convey the gravitational force, or it could produce actual strings.

Unlike current particle accelerators, the collider should have enough energy to show particles that travel in or through the extra dimension.

Randall says she looks forward to the opportunity to test her theories.

“If these ideas are proven correct, it can be really big. But whatever the [collider] finds will be big news,” Randall says.

Nima Arkani-Hamed, a professor in the physics department who has written several papers with Randall, says he is excited about the collider’s potential findings and their significance for particle physics.

“We will see which one of these ideas from the last 25 years is right,” Arkani-Hamed says.

Evidence of a fifth dimension could signal a new era in physics and could mean significant accolades for Randall. The Boston Herald speculates she would be a “shoe-in” for the Nobel Prize if the collider proves her correct.

But Randall says that she prefers to think about her research.

“It is a big if,” Randall says. “I am thinking about what I am doing at the moment.”

—Staff writer Adrian J. Smith can be reached at smith9@fas.harvard.edu.