A Humble Start on the Path to Stardom 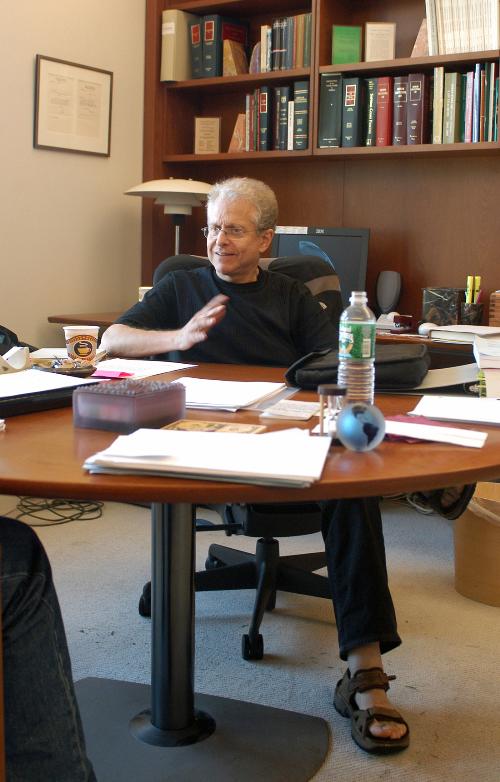 Constitutional Law Professor Laurence H. Tribe ’62 came to the U.S. in 1947 speaking no English. After clerking for Supreme Court Justice Potter Stewart, Tribe was offered a job at the Law School where he has been ever since.
By Paras D. Bhayani, Crimson Staff Writer

Laurence H. Tribe ’62 once wrote that constitutional law’s “accumulated lines of thought and argument are indeed tantamount—however familiar the metaphor—to the threads of a complex tapestry.” The Harvard Law professor is now taking constitution-as-art one step further with a book that uses his own artwork to explain the nation’s founding charter.

“The book is for those who are more right-brain than left-brain,” says Tribe, often considered to be the brains of the legal left.

This isn’t the first time that Tribe has gone public with his paintings. In the early 1950s—as a child in San Francisco—he won an art contest and received a bicycle as his prize. But rather than learn to ride the bike, Tribe sold it. It wasn’t until this summer that he moved past training wheels, finally learning “to ride a bike at the ripe old age of 64.”

But even though he couldn’t ride a bike, Tribe had been on a decades-long roll. Since 1978, he’s brought three dozen cases to the Supreme Court and won about two-thirds of them. The New York Times once declared his 1978 book—“American Constitutional Law”—“the closest thing to a definitive treatise on the Constitution.” In 2004 he received one of Harvard’s 20 prestigious University professorships—his post had previously been held by Watergate special prosecutor Archibald Cox ’34.

And amidst all these accolades, he says it’s clear which one means the most to him: the Sacks-Freund Prize for Teaching Excellence, awarded annually by the Law School’s graduating class.

These honors would be impressive on any resumé—but they’re the all the more remarkable considering that Tribe arrived on the shores of California in 1947, not knowing a word of English.

Laurence Henry Tribe was born on Oct. 10, 1941 in Shanghai, China to parents George and Polia, members of the Eastern European Jewish diaspora that populated parts of eastern China.

George, a native of Belarus, traversed nine time zones to reach Harbin, Manchuria, Polia’s birthplace, where the couple met in the late 1920s. He continued on to California—becoming an American citizen—and later returned to Harbin. Laurence was born in Japanese-occupied Shanghai just two months before Pearl Harbor. George was interned on account of his citizenship, leaving Polia to care for their son.

After the war ended, the Tribes set sail for San Francisco, landing two days before Alexander, the younger son, turned one. George became a car salesman, and the Russian-speaking Laurence enrolled in the public schools.

A bright, but not terribly popular, student, Tribe’s horizons were limited. He hadn’t ever heard of Harvard until a friend suggested he apply, and after being admitted, he enrolled without visiting. His parents had no money—his father was too honest to be a good car salesman, he says—so the University picked up his tuition bill.

When Tribe arrived in Cambridge in 1958 at the age of 16, art and mathematics were his passions, and the latter would become his major. He soon became a star debater—as in high school—reaching the quarterfinals of the national debate championships as a sophomore and winning it as a junior.

“Larry basically invented modern college debating,” recalls his sophomore-year debate partner Albert W. Alschuler ’62, a Northwestern law professor. “He and I were walking around Cambridge when he looked into an art store window and saw a grey sketchpad. We divided it into columns, one for each speech, and devised a way to track all the arguments throughout the debate.”

“In some ways it sort of ruined debate, making it a clever game rather than anything thoughtful, but Larry was the master at it,” Alschuler adds.

In March 1962—the spring of their senior year—Tribe and Alschuler were scheduled to debate in Charleston, W.Va., but Tribe fell ill and went to the Stillman Infirmary instead. While there that night, he quickly got to know another patient, Carolyn Kreye, a student at the Graduate School of Education. “They basically spent their first year of graduate school falling in love,” Alschuler says of the Tribe and Kreye, who married in 1964.

While Tribe spent a year studying mathematics as a graduate student, he soon realized that the field was lonely and that he lacked the innate genius needed to make truly meaningful contributions. Alschuler, meanwhile, had enrolled at the Law School.

“Larry saw what I was doing in law school and realized that he wasn’t as smart as our classmate Saul Kripke,” Alschuler says, referring to the now-renowned Princeton logician. “So he thought, ‘Maybe I can do well in law.’”

He’s been here ever since.

FROM POUND HALL TO THE HALLS OF CONGRESS

A reunion of Tribe students would bring together leading figures from both houses of Congress and the Judiciary, including Chief Justice John G. Roberts Jr. ’76; Rep. Barney Frank ’62, a 1977 Harvard Law grad; and Sen. Barack H. Obama, whom Tribe describes as “a political and rhetorical genius.”

“Larry had more energy than the young 20-somethings that used to work for him,” Dorf says. “You’d leave something for him at two in the morning and by seven he’d have answered all your questions and have 10 more for you to answer. Then you’d seem him in class and he’d be perfectly prepared with material that had just been handed down by the court a week before.”

Georgetown law professor Peter J. Rubin, another of his former research assistants, says: “Harvard has an outstanding law faculty, but there are a few people who have stood out. The ones who truly have, I would say, are Joseph Story and Felix Frankfurter, the Supreme Court justices, and Larry Tribe.”

At 65, and with a Republican in the White House, Tribe’s chances at the Supreme Court bench are next to nil. He was considered a contender in the Clinton years, but Senate Republicans would have fiercely resisted his nomination: Clinton aides conducted a head-count of the Senate, Tribe says, and they concluded that he could have been confirmed but that he would have faced “a bloodbath of opposition.”

Despite the fact that he has never donned judicial robes, he certainly has left his mark on the court’s jurisprudence.

And he argued the famous 1986 case Bowers v. Hardwick, urging the court to invalidate a Georgia anti-sodomy law that, Tribe said, violated his gay client’s fundamental right to private sexual association. Tribe lost, but he was redeemed 17 years later when, sitting in a packed courtroom, he heard Justice Anthony Kennedy say, “Bowers was not correct when it was decided, and it is not correct today.”

If his predecessor Cox—who continued teaching into his 70s—is any guide, Tribe will likely remain at Harvard for many more years. His popularity among students isn’t waning—even after he admitted 80 to his constitutional law class this year, 150 were left on the wait list. And next year he will take on a brand new teaching challenge: a dozen Harvard undergraduates in a class called “Sex, Love, and Death in American Law.”

He says he finds time off to be hazardous—while he’s never missed a class due to illness, he was dogged by health woes during his 2005-2006 sabbatical.

“I had three abdominal surgeries, a back surgery, and a heart attack,” Tribe says. “Now that I’m back to teaching, I feel safe again.”

While Tribe will speak at length about his litigation and activism, he’d just as rather talk about art—his wife, son, and daughter are all professional artists—and his family, especially his granddaughter.

But for at least the next year, his political activities—he’s been a harsh critic of the National Security Agency’s domestic spying program, for example—and scholarship are sure to keep him busy.

His new book of constitutional art is only one of his works in progress. He’s also forging ahead on an analysis of the Ninth Amendment.

This time, though, words are his medium.