HRDC and Stern Make Sure ‘Bette’ 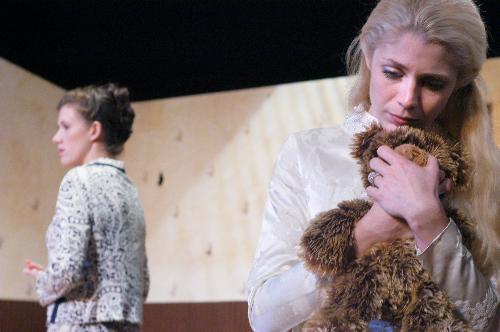 Generations of family struggles, presented with a combination of gravity and comedy, dominate the first Loeb Mainstage theatrical production of the year, “The Marriage of Bette and Boo,” which opens tonight and will run through Oct. 28.

As a part of the Visiting Director’s Project (VDP), the play is the only Harvard-Radcliffe Dramatic Club production this season that will not have a Harvard student at its helm. Instead, the play is being directed by Marcus Stern, the renowned associate director of the American Repertory Theatre (A.R.T.) and the A.R.T./MXAT Institute for Advanced Theatre Training.

“I’ve always loved this play,” says Stern, who directed a well-received production of “Bette and Boo” for the A.R.T. in 1998, on his choice of script. “It balances some very dark humor with some very delicate heartbreak. I don’t know of many scripts that are able to walk this fine line so successfully.”

Producer Aileen K. Robinson ’08 describes the story as “funny, and also sad at the same time. Very real. Not everything is pleasant in their lives.”

The play was written by Christopher F. Durang ’71—who won the Harvard Arts Medal this past spring—and is made up of 33 short vignettes. Robinson says of the non-linear scene structure that “it’s like the way we remember life.”

Bette and Boo’s marriage ceremony begins the play, but as the plot progresses, their relationship quickly deteriorates.

But as actor Josh C. Phillips ’07 points out, “it’s not their fault.” Rather, outside forces like Boo’s alcoholism and Bette’s miscarriages saddle both the couple and their only child, Matt, with intense emotions for which they can find no outlet. Phillips, who plays a character that has had a stroke and has trouble speaking intelligibly, says that “the theme of the play as a whole is the absence of communication.” Durang has admitted that the play is largely based on his own childhood experiences.

When Harvard first started the VDP in the spring of 1995, the involvement of professional adult directors in student drama was controversial, but nearly 12 years later, the students involved overwhelmingly view it as an incredible learning opportunity.

According to Phillips, Stern’s flexibility makes him an ideal director for student productions. “Marcus’s style works really well for non-professional theater,” he says. “He gives us a lot of freedom in how to interpret roles. He’s very kind and open and at the same time he has a definite vision of the play.”

Mike B. Hoagland ’07, who will play the role of Boo, says, “Marcus has the incredible ability to look at something once and know how to fix it.” Phillips adds that Stern “has never vetoed an idea.”

Neither, according to Robinson, has “Bette and Boo.” In the words of the producer, “it’s a great play because it doesn’t throw anything away.”