‘Go Forth From Your Country’ 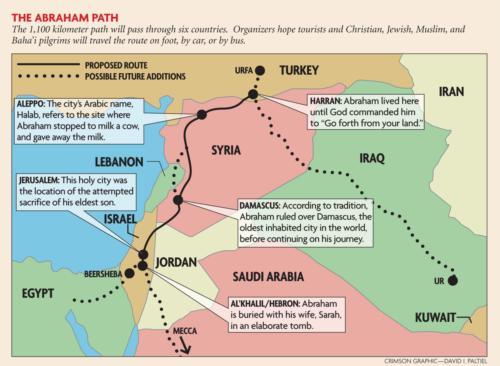 By Christian B. Flow and Rachel B Nolan, Contributing Writerss

For centuries, Muslims have flocked to Mecca, Jews have traveled to the Western Wall, and Christian pilgrims have followed the Stations of the Cross. But if a negotiation expert at Harvard Law School has his way, adherents of the faiths that claim the prophet Abraham as a forebear will have a reason to walk together in the Middle East.

On Tuesday, delegates from 10 countries, led by William L. Ury, director of the Harvard Global Negotiation Project (GNP), concluded a two-week tour of some of the Middle East’s most ancient and holy sites. The tour participants were looking to advance plans for a path by which future tourists might follow the footsteps of Abraham—the father of monotheism who is claimed as an ancestor by Muslims, Christians, Jews, and Baha’i.

The Abraham Path would begin in Harran, Turkey—which many Biblical scholars believe to be the location where Abraham first heard the call to “go forth from your country,” as the Book of Genesis recounts—and would end 1,100 kilometers to the southeast, at Abraham’s tomb in the West Bank city of Hebron. Highlights include important religious sites such as the Umayyad Mosque in Damascus, the Church of the Nativity in Bethlehem, and the Dome of the Rock in Jerusalem. Passing through Turkey, Lebanon, Syria, Jordan, Israel, and the Palestinian territories, pilgrims and tourists could travel the route on foot, by bus, or by car.

The Abraham Path Initiative still faces many hurdles before its plan becomes a reality for visitors to the Middle East, but Ury hopes that in time the path will become a potent—if unconventional—tool in the quest for religious and political conciliation.

Co-founder of Harvard’s Program on Negotiation at Harvard Law School, Ury has mediated situations ranging from corporate mergers to ethnic war in the former Yugoslavia. In 1982, he founded the organization now known as the GNP, with the intention of lessening the possibility of nuclear war between the USSR and America.

With the close of the Cold War, Ury turned the GNP’s attention toward the Middle East, an area in which he has long held an interest. Ury thinks that by bringing believers of the Middle East’s major faiths together to pay homage to their common ancestor, the GNP’s latest project might contribute to greater understanding of the tensions between them.

“[The route] can be a catalyst for intercultural interaction on a large scale, so that people can understand the roots of the problem as well as the roots of civilization itself,” says Ury. He also identifies the path as a potential “magnet for tourism and economic development.”

After a year spent building support for the project among everyone from economists to religious authorities, Ury has focused on logistics in 2006. Recently, the Initiative put out informational materials, created a DVD with a virtual tour of the route, built a small executive team, and began mapping the route. Ury hopes that one segment of the path, in Jordan, might be opened as soon as 2007.

Ury is careful to point out that success in implementation will hinge largely on the circumstances and support of countries through which the path will pass.

“The Harvard project is basically carrying out a study,” Ury says. “The actual countries are carrying out the actual work of the project.”

A key function of the study tour, according to Ury, was to respond to the perceived danger of navigating the regions traversed by the path.

“One of the reasons why we just took this trip was because there was widespread skepticism because of the images that we see of these countries,” says Ury. “The media tends to focus on areas of conflict, and they tend to create an image of conflict, but we had a very smooth passage.”

This is not to say that the whole of the operation has gone quite so smoothly. One notable bump occurred when the Syrian government put a hold on the participation of Osama al Nouri, a member of the Abraham Path’s initial leadership team.

This setback appears to have been more than purely administrative. According to an online list of Path Initiative leaders, al Nouri’s “knowledge of languages and logistics [made] him central to the implementation of the plan on the ground.”

“Because of the very delicate political situation in Syria right now, and in the aftermath of the war in Lebanon, the Syrian government has been very cautious,” he says. “But they were very warm in their welcome of us as tourists...I’m confident that as they get to know the project and they get to know us they will be ready to move forward.”

Some observers fear that Syria will be far from the only roadblock. Jerusalem native Mishy Harman ’08, for one, says he thinks the project is entirely infeasible.

“Just within Jerusalem, the Waqf [Muslim administrative body responsible for the Temple Mount] doesn’t even allow Jews onto the Holy Mount,” says Harman.

The Dome of the Rock, located on the Temple Mount, is part of the planned itinerary of the Abraham Path.

“It sounds like a really beautiful idea,” adds Harman. “I hope that a day will come that it will be so, but you can’t disregard the political realities in the world, even if your ideas are very good.”

Practical concerns also include the fact that travelers with Israeli stamps in their passports cannot enter Lebanon or Syria, and vice versa.

Essrae Cherim, executive administrator to Ury, allows that passport complications and exclusivity of religious sites remain problems. “This project is taking a very long-term approach (hopefully this path will be in existence hundreds of years from now),” writes Cherim in an e-mail. “We understand the current constraints on the people and the governments and understand that, for now, these changes may not be right for them.”

“This is a path which—like any path or journey—we are basically taking one step at a time,” he says. “We’re dealing with a complex situation. In a journey, you never know quite what the next step is, and we’re anticipating obstacles, but so far the project has progressed.”

Christianity, Islam, Judaism, and the Baha’i faith are all considered Abrahamic traditions, a classification that includes over half of the world’s actively religious population. Abraham, whose life is narrated in Genesis, is a central patriarch in the Judeo-Christian tradition, and is described as a prophet in the Qu’ran. Abraham is also thought to be an ancestor of Baha’u’llah, the nineteenth-century founder of the Baha’i faith.

This classification is not uncontroversial, as some adherents of each religion would be quick to point out differences in historical representations of the patriarch. Judeo-Christian and Muslim traditions disagree over whether Abraham’s first-born son was Ishmael, from whom Muhammad is said to have been descended, or if his first-born was Isaac, thought to be an ancestor of Jesus.

“Within the Islamic tradition, Abraham is held in very high esteem,” says Ali Zaidi ’08, president of the Harvard Islamic Society. “There are big parts of the Holy Qu’ran devoted to talking about him and his journey.”

Rabbi Avi Poupko of Harvard Hillel says Abraham is one of the most influential figures in the Jewish faith. “He’s the first Israelite, the one who started everything,” Poupko says.

Poupko says that the project appears to draw on a distinctly Christian tradition of walking, noting that many Christians visiting Jerusalem ”walk from the site of the Last Supper to where Jesus was crucified.” By contrast, he says, “Jews honor holy places, but have no tradition of actually following in their [prophets’] footsteps.”

In keeping with its ecumenical aspirations, the Abraham Path Initiative has been endorsed by a wide range of public figures—religious and otherwise. The Dalai Lama has given his approval, as has former U.S. President Jimmy Carter.

“It would indeed be a dramatic demonstration of brotherhood if religious leaders and lay persons could join in re-tracing the route of their common ancestor, Abraham,” Carter has said, according to the project’s website.

Some hope that the full retracing—beyond just the Jordanian segment—will be ready for visitors to experience soon.

“If it were opening next year,” says Zaidi, “I would definitely consider doing it for a summer abroad.”