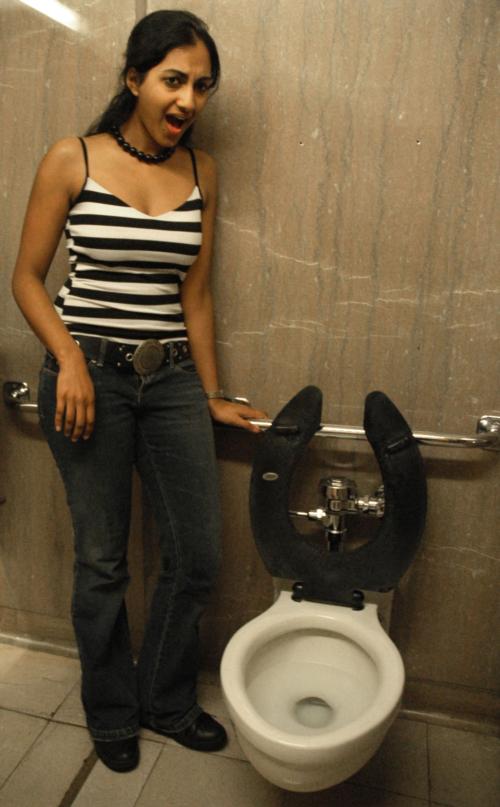 In Their Unnatural Habitat?

A. Benet Magnuson ’06 towers over his roommates by a head—and then some. One roommate lounges on the sofa in
By Lena Chen

A. Benet Magnuson ’06 towers over his roommates by a head—and then some.

One roommate lounges on the sofa in a faded purple Cornell sweatshirt. The others recline by Magnuson on the bed, one sporting a black and white ensemble with a necklace of bulky black beads, the other a teal cardigan over a flimsy floral top.

Though stylishly dressed, the Mather residents are a bit limited in the time-honored rooming tradition of clothes borrowing.

In this suite, Magnuson is the only male.

After two years of negotiating red tape and regulations, he finally convinced Harvard to let him room with his four female blockmates.

While women first lived alongside men in Harvard houses in the 1970s, the College has never allowed coed rooms beyond a case-by-case basis. Even then, students must meet requirements, such as locks on every door. Since room configurations vary and permission depends on the whims of House masters, applying for coed rooming is often a crap shoot with notoriously low odds. Magnuson got lucky.

This year, Magnuson and his four female roommates moved into the Mather Tower with a private bathroom and single bedrooms, which fulfill the College’s coed privacy requirements.

When Magnuson turns off the lights in his bedroom, the 18th floor window reveals the illuminated Boston skyline. It took him two years to get here.

Because curfews and parietal rules have long been wiped from Harvard’s rule books, Magnuson and his roommates see no reason why coed rooming shouldn’t be an option for all students. Even without administrative approval, many students skirt the rules and live in coed rooms.

Though heterosexual couples might disobey rules to live together, gay students have had an easier time requesting coed rooms.

“I think our masters were definitely more receptive to our proposal considering that Benet is gay,” says Azzurra S. Cox ’06, one of Magnuson’s roommates.

Restrictions on living arrangements mostly exist on paper alone. Furthermore, unofficial mixed-sex rooms are not uncommon. Several students declined to be interviewed for this article, fearing their unapproved arrangements would be compromised.

Female rooms that share fire doors with male ones are allowed to open the doors with House permission, creating coed suites in all but name.

Coed rooming groups are only allowed to live in rooms that meet stringent requirements. But some students question why such policies exist if they live among friends.

The College’s Handbook for Students states that coed rooms are only allowed with the permission of House masters in a space that “ensures a large degree of privacy.” This requires that students have locks on their bedrooms and private bathrooms, and such rooms can be hard to come by in certain houses.

The bathroom issue was the main obstacle for the Mather roommates. Their bathroom required a $220 lock, which was quite pricey for a precaution the students considered heteronormative. Their House masters found a cheaper lock for $75.

Rachel K. Popkin, a sophomore in Lowell House, wasn’t as successful in her attempts to room with five other women and one man. Administrators informed her that architectural constraints rendered co-ed living arrangements impossible for the House’s sophomores.

“I think when you’re choosing roommates, a lot of factors go into it—who you live well with, who you’re comfortable with having in your personal space. Some people want to room with someone of the same gender, some people don’t, and the college should respect that,” she says.

“I had a really uncomfortable situation with my roommates and these guys,” Magnuson says of the males who shared his bathroom. “I would’ve liked a lock then.”

The quest for gender-neutral habitation is neither new nor Harvard-specific. At last, this year a committee of students and administrators will meet to reexamine housing guidelines.

In 1992, the Civil Liberties Union of Harvard launched an ultimately unsuccessful campaign to secure coed rooming. Their report found that students pursuing coed rooming were treated with little uniformity, as they were obligated to seek approval from their House masters on a case-by-case basis. It also reported that 91 percent of the Harvard undergraduates surveyed were in favor allowing coed rooming at the College.

Other schools, including Columbia and the University of Pennsylvania, have taken a more liberal approach towards mixed-sex housing. At Penn, upperclassmen may apply for coed rooming, according to the school’s Housing and Conference Services website. At Columbia University, some residential buildings allow for coed suites. Wesleyan, Swarthmore, Brandeis, Tufts, and New York University also support coed arrangements.

The future seems promising for Harvard roommate combinations of all types. Associate Dean of Residential Life Suzy M. Nelson has noted the coed trend among other schools and plans to form a committee on housing policies.

“A committee comprised of House masters, staff, and students will be convened in late spring to discuss Harvard’s policy in light of the needs of our student population and in the context of what our peer institutions are doing related to gender-neutral housing,” she writes in an e-mail to FM.

Few signs in the Mather suite hint at a male presence. The most obvious indication of Magnuson is, funnily enough, in the bathroom—a poem he posted in the stall. The roommates explain their tradition of displaying verse in order to “pass the time” while using the toilet.

“Did you see the new one I put up?” Magnuson asks his roommates. He had posted a parodic poem he had titled“Below the poem by a man.”

Eager to read his selection, the women peek in the stall, one by one.