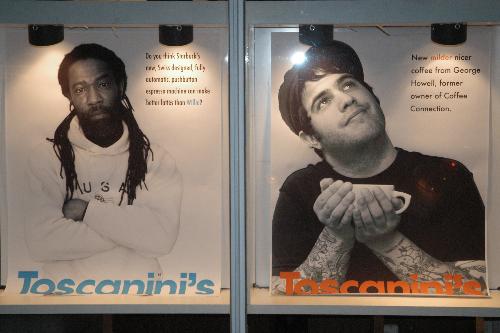 Toscanini's Brews Up an About Face

Recently, Cambridge’s own Toscanini’s blanketed the Holyoke Center with countless advertisements, not unlike larger retailers in the Square such as Adidas and Starbucks. The coffee shop’s ads targeted Harvard students by referring to the reading period workload. One such ad read, “During Reading Period drink mild George Howell coffee for better grades.” The end of the ad suggested caffeine consumption improves studying.

“It was either this advertisement or a $2 hot chocolate sale,” says seven-year Toscanini’s veteran Michael L. Krondel, who finds “nothing at all” wrong with the ad campaign. And fellow employee Elize Casarjian defends marketing caffeine to college students. “In theory, every drink is bad for you; milk, for example, rots your teeth.”

But some of Tosca’s patrons don’t like the new ads. “Coffee should be savored for its taste, not for the caffeine,” says Louis K. Kang ’09, who feels the advertisements “degrade the coffee.”

But for those chugging caffeine to pull all nighters in the musty Lamont reading room, Toscanini’s might just hit the spot. Even at two bucks a cup.