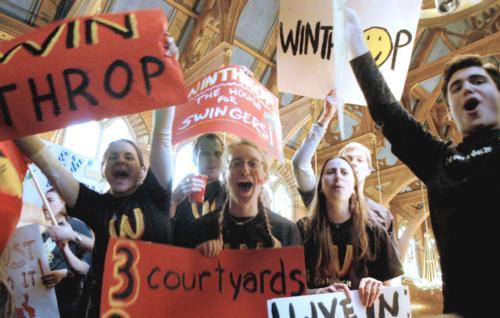 When Garrett G.D. Nelson ’09 was handed a new black polo shirt with “Cabot” embroidered under the collar in Annenberg yesterday, he was faced with a moral dilemma.

But ultimately, Nelson sacrificed his principles out of loyalty to his new house.

“I am definitely a staunch, anti-popped collar proponent, but I did, somewhat to my chagrin, pop my collar in the overwhelming Cabot spirit that overcame me,” Nelson said.

“He changed his ways for us,” said Robert D. Winikates ’08, who was dressed as a giant red fish.

Winikates was among over a hundred flag-waving, sign-bearing enthusiastic upperclassmen who welcomed freshmen newly assigned to their houses at Annenberg hall yesterday.

Official housing assignments were delivered in the morning, after a prank e-mail sent out to all freshmen caused false alarm the night before. The e-mail assigned students to the Quad or overflow housing, asking that they direct complaints to the “housing office”—and listed the phone number for The Crimson newsroom.

At lunch, the freshmen were welcomed with a cacophony of upperclassmen cheering, music blasting, and Lowell residents ringing cowbells.

Jack P. McCambridge ’06 of Winthrop house drew stares in a Mr. Incredible muscle suit and wig. He said the costume was meant to portray the “idealized Winthropian.”

For Robert M. Koenig ’06-’07, the question was not what he and a few other Currier residents were wearing, but what were they not wearing.

Koenig, a former House Committee (HoCo) chair, was sporting only black briefs with “Currier” painted on the rear and a felt fig leaf demurely hanging from the front. “Everyone loves the booty...best position to advertise Currier,” he said.

Former Lowell resident Natalie Portman, or at least her cardboard cut-out, greeted freshmen, donning a blue Lowell House shirt. “She was before our time, but her presence is still felt very strongly in Lowell,” former HoCo chair Kaartiga Sivanesan ’06 said.

The enthusiasm displayed by upperclassmen worked its magic upon freshmen.

“You feel like you’re being initiated, like you’re actually at Harvard,” said Claire J. Saffitz ’09, who will live in Adams House. “It’s like a rite of passage.”

Others were more skeptical.

“Everyone seems to have a lot of house pride before they really know anything,” said Andrew P. Oakland ’09, newly in Adams.

Charles C. Yin ’09, who was placed in Dunster, said he initially had qualms about his house.

“I heard bad things about it, but ultimately it’s fine,” Yin said. “The enthusiasm really helps.”

Later in the day, houses greeted the newcomers in their own fashion. Dunster roasted s’mores in the courtyard and Mather dished out sushi, while Adams HoCo celebrated in style, dressed in tuxedos and handing out flowers.

—Staff writer Joyce Y. Zhang can be reached at jyzhang@fas.harvard.edu.