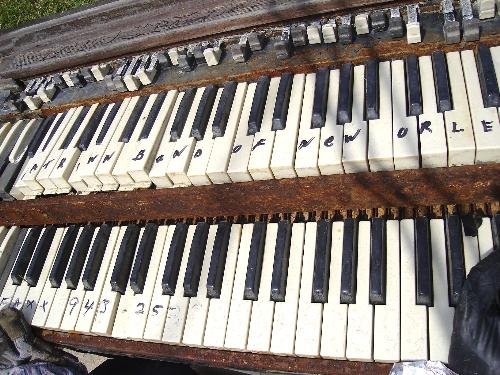 On this old keyboard are written the words “Katrina Band of New Orleans.” The gloves of a toy gorilla play the keys.
Advertisement
Advertisement

They play in a lonely driveway under a forlorn trumpet and two drums, this silent band. At a yellowed keyboard
By April H.N. Yee

They play in a lonely driveway under a forlorn trumpet and two drums, this silent band. At a yellowed keyboard markered with “Katrina Band of New Orleans,” a gorilla plays forever, an empty bottle of Bacardi in his lap. Next to the pianist, a monster hunches over a guitar, ignoring the empty wine bottle nearby.

The lead singer, a mannequin with a gray wig, sings at a rusty microphone. David L. Fountain, 54, calls this wooden statue his wife. Without her, Fountain would have been a bachelor all his life, he says.

“She’s a bad woman. A bad woman.” He laughs. “I like her because I can slap her and she don’t fight back.”

Her name is Katrina. She treated David pretty badly this summer. After her arrival, the water rose to just underneath his chin when he stood inside his house. Fountain evacuated to the Convention Center. When he returned to his home, he slept on the roof rather than inside his wet house.

While others in Fountain’s neighborhood have tried to reconstruct their one-level homes or have opted to simply start new lives in new cities, Fountain has chosen to cope with Hurricane Katrina the way Petruccio deals with his Kate in “The Taming of the Shrew.” He will not bow under her fuss and noise. Neither will he abandon her.

Fountain is one of the few who has moved back into this bit of the Upper Ninth Ward. He is little less than a block away from the Habitat for Humanity site where some 40 Harvard undergraduates helped to lay foundations this past spring break.

But the healthy construction site was one of the few things moving in the neighborhood. In a place hard hit by Katrina, the growing subdivision Musician’s Village is a small ray of hope. Local celebrity crooner Harry Connick Jr. has donated for the 80-home project, which he hopes will bring musicians back to the Ninth Ward, once the hub of New Orleans jazz. Legends like Fats Domino were born here.

Following the example of the Habitat for Humanity project, David has chosen to call his silent band “Musician’s City.” He wants New Orleans—not just the subdivision—to once again become home to jazz. The instruments are scrounged from roadside curbs. It’s hard to tell how far he ventures beyond his block. Many of the materials, like the lead singer’s rusty microphone, are brought to him by friends.

Those items are the casualties of the hurricane. Though Katrina came and left seven months ago, the aftermath is still apparent. In this neighborhood, homes sag in the middle, inside mold climbs up the walls, spreading outward in black splotches. The waters from the Mississippi River and Lake Pontchartrain pooled in the nooks of cabinets and other hidden places. Worse are the silent, empty homes filling so many neighborhoods. Sometimes, from the skeleton of a house, a homeowner wearing a surgical mask quietly appears. But more often than not there is no one at all.

The city suffers in other parts. Not all the streetlights work. The potholes have somehow gotten worse. Homeowners still worry about theft. They don’t want the tools they use by day to resurrect their homes to be stolen at night.

Out in the gentrified sections of the city, far away from Fountain’s home, little seems changed from before Katrina’s arrival. Brides can still buy wedding invitations in cool shades of cream. Stores sell day planners in smooth leather for a little under $100 and pink-spotted stationery for $20. Past this and the neighborhood coffee shop (iced chai latte, $3.65), there sits a solid Whole Foods. Blackberries are priced $5.99. A half loaf of bread costs 99 cents. A willing customer can buy corn-and-crab chowder and creole crawfish salad by unit weight.

In New Orleans, normalcy can be bought by the pound.

On a yellow Friday afternoon of spring break, Fountain sits on a porch with two old men just the way old men like Fountain always have here in this city. He leans back and laughs, only his shoulders and bottom touching the rocking chair. His two neighbors throw back their heads, too, showing glowing gold fillings. So long as they can laugh, they don’t question the cause.

Next door is the ranch house which has been his since 1978. Though Fountain’s driveway hosts an unlikely menagerie, the inside reveals nothing unique in this town, just gutted walls and moldy phantoms. In a doorless closet hang some shirts, and a small plasma TV babbles happily in the converted garage. Fountain is fixing up the place nice, or at least trying to. He walks back outside to his band and points to the golden trumpet. But he has forgotten something inside.

He ducks back into his garage and and emerges wearing a huge sombrero and clutching a 1.75-liter bottle of Crown Royal Whiskey. As he pours it into a glass with ice, his face is completely concealed by the straw hat’s brim. He looks up, drinks the liquid. Above him, a campaign sign reads, “We’re Home.”

Sometimes Fountain sits out here and plays at being a mannequin as SUVs of college volunteers, some from Harvard, drive by. He becomes part of the Musician’s City band. Like the other musicians, he is still and silent.