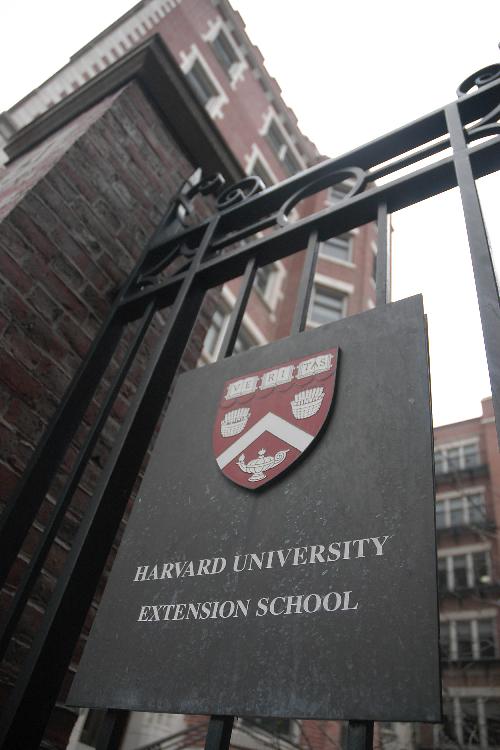 Russell “Russ” McAlmond, like many Harvard students, goes online during class. Unlike most Harvard students, however, he isn’t surfing Facebook; he’s going to class. This is how Russ—a fifty-three year old Oregonian—studies at Harvard.

McAlmond is part of a growing group—which once famously included teen queen Hilary A. Duff—that takes online courses through Harvard Extension School (HES). The Distance Education Program (DEP), started in 1997, caters to adults who wish to continue their education. Of the 600 course offerings this year at HES, 75 are available via the Internet. Although the Distance Program does not confer degrees, two certificate programs—Environmental Management and Applied Science—can be completed online.

Several DEP courses—including CSCI E-2, “Bits,” and GOVT E-1045, “Justice”—are the same classes that students sit (or sleep) through in the Science Center or Sanders Theater. Online students take the same exams, write the same papers, and are graded on the same curve as “real” Harvard undergraduates. And, according to some faculty, many of these Distance Program participants are more dedicated than the average student.

FOR LOVE OF LEARNING

Brian M. Greenberg ’04, the Distance Program TF for CSCI E-2 (also known as Quantitative Reasoning 48), says that HES students can actually be “more fun” to work with than undergraduates. He says that College students often “take the learning process for granted,” adding that “the people in the Distance course are paying money out of their own pocket to complete the process. They will go out of their way to make sure they understand.”

Some students go far out of their way, even if it means crossing state borders. According to Greenberg, one of his past students from Albany, NY, wanted to drive to Cambridge to go over course material.

Even oceans can’t stop the DEP students’ commitment to learning. According to Greenberg, one student from the United Arab Emirates dealt with an eight hour time difference by watching lectures in internet cafes between two and three AM his time.

Senior Lecturer in Mathematics Paul G. Bamberg Jr. ’63, whose class on classical geometry is open to both undergrads and Extension School students, echoes Greenberg’s positive experience with HES. Bamberg emphasizes that everyone is held to the same standards, saying that, “they all sit in the same classroom and take the same exams, and over the past three years the Extension students have done as well as the undergraduates.”

Evan K. Harris ’09, who is taking “Bits,” has a theory on why HES students may do especially well. “It’s up to them to log on to the site or not, while it’s very easy for me to sleep through lecture and to not really worry about it,” he says. While Harris thinks it’s fine for outsiders to enroll in courses online, he believes they shouldn’t claim they go to Harvard. “The Harvard experience is much more than the classes.”

On Feb. 4th, actress and singer Hilary Duff posted on her website, “I’m taking on-line classes for Harvard University. Really cool! I am really excited about going back to school and the online classes are really cool.” The Crimson quickly pounced on Duff, publishing a scathing editorial on Feb. 28th titled “Duff at Harvard.” The article ended with, “So you told people you were going to Harvard (ambiguous). It’s Harvard (extension), which (disclaimer) by the way is a perfectly great option for education. Whatever.”

The Crimson’s patronizing attitude didn’t charm everyone. CSCI E-2, “Bits,” Professor Harry R. Lewis ’68, who also teaches the class for the Core Curriculum, says he was offended by the editorial. “I don’t think that Harvard misrepresents the difference between the College degree and the HES degree,” he says. HES students are “simply trying to better themselves and are honored to be able to be part of the institution,” says Lewis, and they “deserve the same kind of respect that the College students deserve.”

McAlmond, who took ECON E-10a, “Principles of Economics” online last year, never went to college. From 1970-1973 he fought in Vietnam, and afterwards got a job unloading rail cars at a grocery warehouse. Today he is the founder and president of one of Oregon’s leading investment advisory firms. He decided to go back to school as an example for his kids as well as his own desire for self improvement.

“Any student who thinks [an HES degree] is not legitimate is engaging in intellectual snobbery or elitism,” McAlmond says. He adds in an e-mail that the DEP “has the ability to flatten the education hierarchy to allow more students to benefit from a Harvard education.”

In a rapidly developing technological world, more students may come to see the DEP as a viable educational option. Greenberg says this is the first year that he has been able to broadcast sections where students can instant message their questions. Nonetheless, problems abound. According to Bamberg, who taught a probability class online, one of the biggest hassles was ensuring that students had access to fax machines or scanners to send in their hand-written math homework.

For Lewis, a major problem for his online students was somewhat ironic. A handful of students had trouble accessing videos because of government restrictions on downloading. “That’s exactly the sort of stuff this class talks about,” Lewis says. “Here is this wonderful invention (the Internet) that can democratize information, and foreign governments have quickly figured out how to put various kinds of filters and blocks.”

With the ivy-covered walls of Harvard rapidly expanding to encompass unlikely but exceptional students, it seems an adjustment of Harvardian attitudes is in order. Despite the social and logistical challenges, Extension School students are earning the Harvard logo one download at a time.