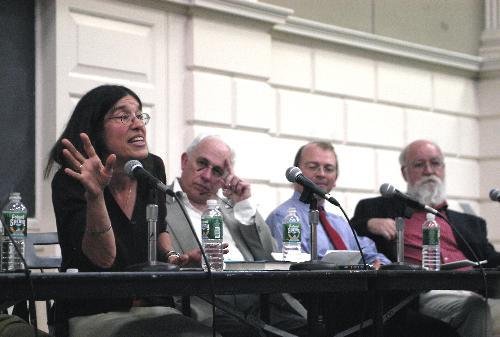 From left, Elizabeth Spelke, John Brockman, Seth Lloyd, and Daniel C. Dennett engage in a panel discussion of the book “What We Believe But Cannot Prove,” to which they all contributed, in Radcliffe’s Longfellow Hall yesterday.
By Jan Zilinsky, Contributing Writer

What do you believe to be true even though you cannot prove it?

Last night, three Harvard professors, a Massachusetts Institute of Technology (MIT) professor, and a Tufts professor provided their own answers to this question before a crowded audience in Askwith Lecture Hall at the Graduate School of Education.

The ideas that they debated included individual consciousness, a common human gene pool, and the existence of electrons.

The discussion, sponsored by the Harvard Bookstore and Seed Magazine, marked the recent release of the essay collection, “What We Believe But Cannot Prove: Today’s Leading Thinkers on Science in the Age of Certainty,” which was edited by John Brockman.

Spelke said she believes human beings are alike, but that she also believes they are predisposed to believe they are fundamentally different.

She said, though, that she remained convinced that people are capable of overcoming their beliefs when these are disproved.

Gilbert claimed that “the only fact that proves itself is our own experience.”

“The fact of your experience is not a fact to me,” he said.

He argued that we can demonstrate “to our own satisfaction” that a creature has a consciousness.

After the introductory remarks, discussion focused largely on human consciousness and language.

The ability to communicate through language may be a key to determining other people’s consciousness and experience, according to Dennett.

But the panelists also pointed out that another unique feature of language is that it allows humans to hide intentions.

“God gave us language so we can conceal our thoughts,” Dennett responded.

Questions from the audience focused on issues such as free will, spirituality, and what constitutes certainty and proof.

“Proof is that which makes everybody shut up,” Gilbert said.

“No,” Hauser responded to break the silence, prompting laughter from the audience.