TEAM OF THE YEAR: Precious Metal

2005-06 Harvard fencers came together on road 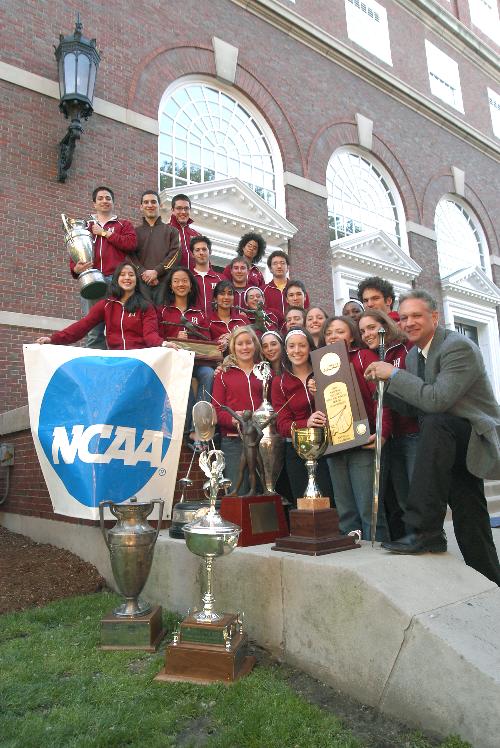 When thirteen tons of aluminum and steel have demanded a push, the type that higher powers never had in mind when they designed human bodies and charter buses, ordinary motorists have been known to get angry.

Peter Brand, head coach of the Harvard men’s and women’s fencing teams, was getting there on February 12, the morning of the Ivy League tournament at Columbia. He took one last look through his bus window at the worst New York City snowstorm on record, a blizzard that dropped 26.9 inches of snow on Central Park, and grabbed his phone.

Never a glum crew, Brand’s fencers made the most of the situation.

Four times, the first with the aid of a tow truck, Harvard hoisted its way out of trouble. The team’s early-morning inconvenience—a team bus that wouldn’t budge—quickly became an excuse to party.

“We were all pretty excited,” freshman Craig Gorin says.

“It was a really great experience,” sophomore Emily Cross says.

Says classmate Benjamin Ungar, “I wasn’t pushing the bus. I got home early. I sort of wish I was there for the experience. I’ve heard some stories.”

The 20-minute drive from the hotel turned into a four-hour marathon. When the Crimson rolled into Columbia’s University Gym, it met—and violently dispatched—Brown and Penn. Princeton, located 150 miles closer to Columbia than Harvard, never made it.

After the matches, Columbia head coach George Kolombatovich, who had held the league championship trophy since his team’s victory in 2005, offered the prize to Brand.

“I said, ‘Pete, you might as well take this,’” he recalls. “‘When you fence against Princeton, you’re going to crush them anyway.’”

Two weeks later, the Tigers had their 19-8 reckoning. Columbia, for its part, had lost to Harvard in Ithaca, N.Y., the previous weekend.

“Without being cocky,” Kolombatovich says, “they were coming here to pick up the trophies.”

Harvard’s medal haul continued through New York and didn’t come to a complete stop until March 18 in Houston. It was there that the Crimson plowed through nine-time national champion Penn State and other scholarship programs on the way to the NCAA Championship, the fourth in the history of the Harvard Athletic Program and the Crimson’s first national team fencing title of any kind in 72 years.

In Houston, as in New York, Harvard’s rambunctious athletes—part fencers, part fans—rallied around a signature catch phrase while they dismantled their opponents.

“Nothing can stop the bus,” Brand says.

The inevitability of such a proposition would have been laughable four years ago, long before the Crimson was sending enough fencers to qualify for the title, much less win it. The turnaround of Harvard’s fencing program in just four years has made for one of collegiate athletics’ most remarkable recent stories.

Still today, the group represents the first real foray for Brand, who was hired in 2000, into the recruiting of elite junior fencers to Harvard.

Not only did the seniors experience the Crimson’s first national title in 2006, but they also won Harvard’s first Ivy League titles—the first ever for the women, the first for the men since 1977—as juniors in 2005.

Not until 2002, when Jakus and Rose were freshmen, had the Harvard men even beaten Columbia since 1978.

“That was a walkover,” says Kolombatovich of the Lions’ success in the once one-sided rivalry. “It wasn’t even a contest. [Brand] has taken that program and turned it around 180 degrees.”

“To say the team has changed,” Austin says, “would be an understatement.”

Harvard’s success starts and ends with Brand. An immigrant to the U.S. from Israel at the age of 13, Brand continued fencing in his adopted country, competing internationally throughout the 1970s and ’80s.

The Crimson, an energetic outfit that Brand tailored together from the nation’s best recruits, has taken to his unorthodox approach to coaching.

Brand is a man who frowns on formality.He grew up on a kibbutz, where neighbors casually address each other by their given names. His fencers call him “Peter.”

And so it is no surprise, on a recent early summer afternoon, that the team goofs its way through a photo shoot; that it smiles through a blizzard 200 miles from home; that it cheers its individual contestants relentlessly on the nation’s biggest stage.

“We’re the loudest,” Gorin says. “We’re all screaming at each other.”

Teammates agree that Brand has attracted a particular type of elite fencer.

“I wouldn’t say goofy, although we have several characters like that,” Ungar says. “But I think he really gets people who are not only good fencers but who are really good team players and work well with everyone.”

As Harvard fencing ventures forward with its first NCAA title defense next year, the team concept will likely again have broad national implications.

—Staff writer Alex McPhillips can be reached at rmcphill@fas.harvard.edu.