Lowell Bells May Return to Motherland 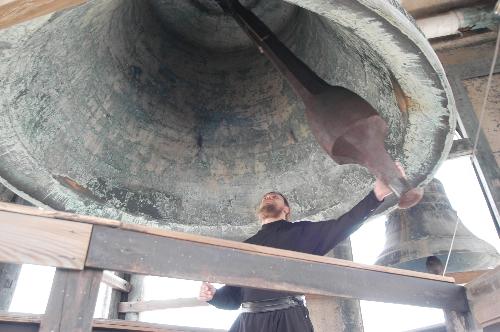 Father Roman rings the Lowell House bells earlier this year. Roman and other representatives of Moscow’s Danilov Monastery met with Harvard representatives in late May to discuss the return of the bells, a fixture in Lowell for decades.
By Anton S. Troianovski, Crimson Staff Writer

After nearly 80 years in the Lowell House belltower, Harvard’s historic Russian bells may be heading home to a centuries-old monastery in Moscow as early as next summer.

Harvard’s project manager for the bells said last week that a foundation backed by a Russian metals mogul has agreed to pay roughly $1 million to transport the 25 tons of sacred bronze back to Moscow and buy replacements for Lowell, possibly ending a decades-long ordeal in which Harvard sought to repatriate the bells but declined to pay for their transfer.

The manager, Peter Riley of Harvard Real Estate Services, said the University is currently soliciting proposals from Russian foundries to replicate the bells for Harvard. Riley and Lowell House Master Diana L. Eck were part of a Harvard delegation that took a whirlwind tour of Russian foundries and belfries in August in preparation for the bells’ return.

“We are optimistically and aggressively scheduling that the exchange would happen next summer,” Riley told The Crimson.

“Certainly, that’s the earliest it could happen,” he added. “We really don’t want to touch a brick on Lowell House until the new bells are here.”

In an e-mail to The Crimson, Eck cautioned that the Lowell bells were not “in the mail” and that casting a new set would take “many months.”

Meanwhile in Moscow, Russian Orthodox clergy were jubilant that the bells were finally coming back to the 724-year-old Danilov Monastery, where they hung until an American industrialist rescued them from Josef Stalin’s campaign to convert religious artifacts into raw materials.

In an interview with a Russian newspaper last week, the head of the monastery, Archimandrite Aleksy Polikarpov, heralded the agreement with Harvard as a testament to the fact that “the past and the present are interwoven especially tightly in monastery life.”

“[The bells] were there more than 70 years, and now they are close to being returned to their ancestral home,” the Trud (Labor) newspaper quoted Aleksy as saying.

Aleksy visited Harvard in 2003 in a bid to have the bells returned. In an e-mail to Lowell House earlier this month, Eck and Co-Master Dorothy A. Austin wrote that “we will certainly have another visit from Russia to Lowell House” this academic year.

But the man who brought Harvard’s long-running negotiations with the Danilov Monastery to a close is Viktor F. Vekselberg, famous for reportedly paying $100 million in 2004 to bring the masterpieces of jeweler Peter Fabergé back to Moscow.

“The Danilov Monastery reached out to Russians and asked for support for bringing the Lowell House bells back,” Riley said. “Mr. Vekselberg’s foundation has stepped forward and committed funds.”

Everything related to the bell exchange will be paid for by the foundation, Link of Time, Riley said. That follows a condition set out by Harvard in 2003, when it commissioned a study to send the bells back and stipulated that “costs such as construction, transportation and bell-replacement would be borne by the Russian side.”

Riley emphasized that it was too soon to say exactly how much the exchange of the bells will cost—since no proposals have been solicited yet—but he said that previous estimates of approximately $1 million were probably correct.

With an estimated net worth of $10 billion, Vekselberg is, according to Forbes magazine, the 44th-richest person in the world.

His Moscow offices could not be reached for comment.

Seventeen of Harvard’s Russian bells hang in the Lowell belltower; the other sits atop the Business School’s Baker Library. They are more than 100 years old, with one dating back to the 17th century, according to the Lowell House website.

After the industrialist Charles R. Crane purchased the bells from the Soviet Union, he presented them as a gift to University President A. Lawrence Lowell in 1930. Lowell House, then under construction, had its tower redesigned to fit the bells.

Aside from being home to one of the few sets of Russian bells that survived Stalin’s regime, the Lowell belltower is also known for hosting raucous parties that attract students from across the campus.