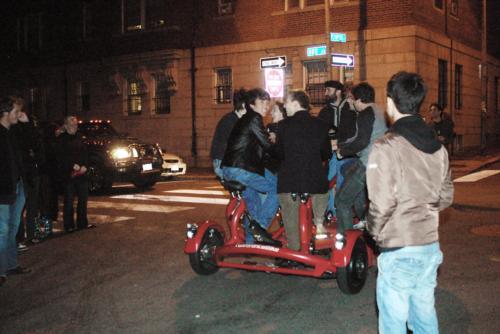 Regina Spektor and members of the Harvard Lampoon ride around Sorrento Square on a 8-seater bike Friday evening as students—many of whom had waited for hours to hear Spektor sing to no avail—look on.
By Lindsay P. Tanne, Contributing Writer

While students hoping to hear the quirky melodies of indie chanteuse Regina Spektor may have been taken for the ride as part of the Lampoon’s latest antic, it was Spektor herself—who emerged from the Castle on an eight-person bicycle—who was taken, literally, on the wildest ride of all.

Friday’s event, advertised as a “presentation” to students over e-mail lists, featured a series of brief appearances by singer-songwriter Spektor before a crowd of students eager to hear her perform at the Lampoon, a semi-secret Sorrento Square social organization that used to occasionally publish a so-called humor magazine.

At 8:15 p.m., two hours after she had been scheduled to appear, Spektor emerged from the Lampoon Castle, riding down the street with ’Poonsters on the eight-person bike.

Many in the crowd—hoping to see a performance—were frustrated by the Lampoon’s evasiveness.

“It’s a hoax,” said Alterrell Mills ’10, one of the many students waiting in the crowd after Spektor’s initial appearance. “OK Go came and they didn’t even play. What is that about? Lampoon, they’re not funny. They’re lame. But I really think it’s not real.”

After returning inside, she played hide-and-go seek, gesturing from castle’s windows before exiting for a second bicycle ride.

But for students who braved the cold, all the waiting was not without reward.

Around 9:10 p.m., Spektor made her final appearance, emerging from the Lampoon Castle with a beer in hand.

“This is really, really crazy,” Spektor said, “I rode around on my own eight person bicycle to my own music, and I’m in a castle, and I’m not on drugs.”

While the crowd had dwindled by then, those who remained seized the opportunity to mingle with the artist.

Spektor enthusiastically took photographs with students, signed autographs, and even spoke on students’ cell phones to their friends.

“It was really cool to have a personal and kind of strange encounter with Regina at the door,” said Olivia G. Volkoff ’09. “It was cool how she played along with the Lampoon stuff, too.”

According to Lampoon member Justin G. Hurwitz ’07-’08, who helped to organize the event, the plan was formulated by Spektor herself, who was not allowed to perform at the Lampoon due to contractual restraints.

“We wanted her to play,” Hurwitz said. “We were hoping she would do a little acoustic thing, but she has contractual obligations where she’s not allowed to play in the same city where she has a gig...So she said, ‘Why can’t we get on an eight person bike and speed away?’”

Under instruction from the Lampoon, Spektor declined to comment on the evening’s events.

“I can’t have any comments for The Crimson,” she said. “They made me swear.”