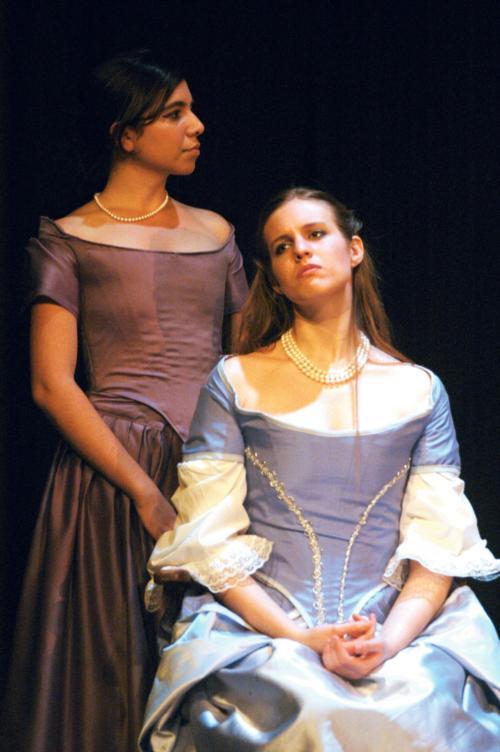 By Olga A. Moskvina, Contributing Writer

“’Tis Love, ’tis Love, ’tis Love/ that has warm’d us./ In spite of the weather/ He brought us together.” These lines were sung during what was, perhaps, the most compelling scene in the Harvard Early Music Society’s (HEMS) annual operatic production, the semi-opera “King Arthur.” The lines were especially appropriate for the show, considering that it premiered on a particularly cold Thursday.

Love is indeed the driving force behind this unusual, three-centuries-old interpretation of the King Arthur legend. There are no heroic quests for the Holy Grail, only a very human Arthur (Adam Friedman) who reluctantly leaves his bride, blind Princess Emmeline (Victoria J. Crutchfield ’09), to fight against the Saxons. He then overcomes various challenges to recover her when she is kidnapped by his archenemy, Oswald, King of Kent (Kerian E. Robertson ’08), and by Oswald’s treacherous magician Osmond (Benjamin G. Gallant ’11).

HEMS had a twofold task: Putting on a production about a 5th-century Briton while maintaining the 17th-century context in which it was originally created, by composer Henry Purcell and poet John Dryden. This balancing act was reflected in exaggeratedly graceful gestures, the use of the harpsichord and the theorbo (a string instrument more commonly used in the Baroque period), and the costumes, designed by Elisa M. Olivieri ’08. The 17th-century English audience expected actors to be dressed in the latest fashions. The cast of “King Arthur” was decked out accordingly, in shining gowns, pantaloons, and vests that were very appropriate for the opera’s 17th-century milieu.

The set (designed by Julia E. Rozier ’08) was simpler than the costumes, consisting of double-sided backdrops that portrayed a basic forest and a castle. The backdrops moved even during the action, usually accommodating the blocking well but with a few occasional glitches.

Friedman managed to strike a balance in portraying an amusing but earnest Arthur. However, Friedman’s appropriate sincerity in his portrayal of Arthur underscored a lack thereof in the interpretation of Emmeline’s character. Crutchfield performed the comedic aspects of the role well, yet displayed too great an awareness of its inherent implausibility. Every opportunity to make Emmeline’s naiveté a source of charm was missed, making the character almost unpleasant at times.

A better-balanced duo were Grimbald (Benjamin T. Morris ’09), an evil fiend under Osmond’s control, and Philidel (Robin W. Reinert ’10), a good spirit who helps Merlin. Their scenes together were always entertaining, particularly when Morris’ hoarse and earthy Grimbald attempts to disguise himself by singing more sweetly to counteract the effects of Reinert’s beautifully clear, determined voice—and through a costume change involving a blonde wig.

Both Morris and Reinert were directed well by Powell to use expressions and gestures which never let the audience forget that they were playing nonhuman beings. The two soprano soloists, Julia S. Cavallaro ’08 and Paula Downes, also succeeded in this effort, matching the loveliness of their white and blue tunics with mesmerizing, flowing movements. Unfortunately, the dancers who appeared in one scene to distract Arthur from his search were not similarly choreographed to lend a more otherworldly quality to their performance through emotional expression. Otherwise, the supernatural inhabitants of this play would have collectively created a cohesive magical world.

Arguably the strongest point of the show came in a scene where Osmond invoked a magical vision for Emmeline, whom he is trying to seduce. In this vision, men and women are frozen until love comes to their rescue. Bass soloist Jonathan M. Roberts ’09, who also played Merlin in other scenes, powerfully conveyed the suffering of the just-awakened Cold Genius through his voice and constricted movements, completely in tune with Purcell’s haunting music. The beautifully sung, acted, and choreographed scene continued with enthralling soloist Cavallaro and the chorus.

Yet Purcell’s lively baroque score was the true mythic hero of the night. At times lyrical, at others an adventurous call to action, it was as palpable as any of the characters, and kept the 300-year-old semi-opera relevant. “Though I cannot see the songs, I love them!” Emmeline proclaims at one point. The orchestra, with musicians from Harvard and the community, made this enthusiastic cry easy to believe.