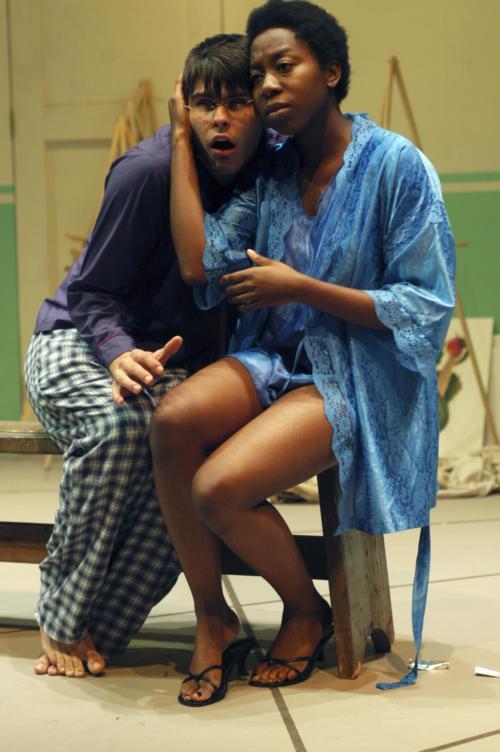 By Rachel A. Burns, Contributing Writer

Prepare to be admitted—not into a theater, but into a mental ward. At tonight’s performance of “The Art Room,” ushers dressed as orderlies will attend the audience, handing out medication in the form of breath mints.

“It’s really fun because it plays with the line between what is considered normal and what is considered insane or abnormal,” Pastel says. “The play has four characters that are patients in the mental ward and two characters that society would deem sane or normal, and by the end of the play the two ‘sane’ characters are proven to be pretty much as crazy as the four patients, and the four patients throughout the play prove to have quite a sense of logic.”

The four patients are not diagnosed with particular disorders. Rather, each character represents a general “type.” There is Jackie (played by Sarah A. Sherman ’09) an extreme introvert, Thomas (Benjamin C. Cosgrove ’10), a man with the mind of a child, Madeleine (Eneniziaogochukwu “Zia” A. Okocha ’08), a hysteric, and Jon (Michael R. Wolfe ’09), a pathological liar.

Although the characters’ types may seem extreme, the production team argues that the audience won’t have trouble identifying with them.

“Everyone will see a part of themselves, or a part of someone they know,” says co-producer Tines.

The instability of the characters is reflected in the peculiarity of Todd Weekley’s stage design. The white and pale green walls evoke the atmosphere of an institution. The four doors in the set lead elsewhere within the mental hospital.

Each of these doors is absurd in a particular way. One is three feet tall, while another is nine feet tall. A third has ten doorknobs, with only one that works, and the final door pivots around a central pole instead of opening on hinges.

Also, the grid pattern on the floor is warped, giving it the general effect of an M.C. Escher painting, according to the assistant director, Julia L. Renaud ’09.

“The set overall reflects the unstable or skewed logic of the characters who are inhabiting it,” Pastel says.

Animations, designed by Grace C. Laubacher ’09, will be projected on stage intermittently throughout the play, adding to the audience’s sense of what is going on within the characters’ minds. The animations are composed of pastel colors, and are used to accentuate particularly strong emotional moments.

The actors themselves have become very absorbed in their characters’ stories.

“You’ll get so far into it that you’ll startle yourself,” says Renaud to Sherman, who plays the role of Jackie.

Sherman added, “I’ll bark without having planned it.”

Barking will not be the only oddity for tonight’s audience.

“There is quite a unique strip scene,” says Pastel.

Although the ushering orderlies, the unbalanced set design, and the barking and stripping of the characters all serve as reminders of the play’s asylum setting, the production team hopes that the audience will not miss the universality of the play’s theme.

Renaud says, “It’s very much about the common humanity of the six characters, and how everyone wants to find love at the bottom of it all.”