A Big Lab for Small Science 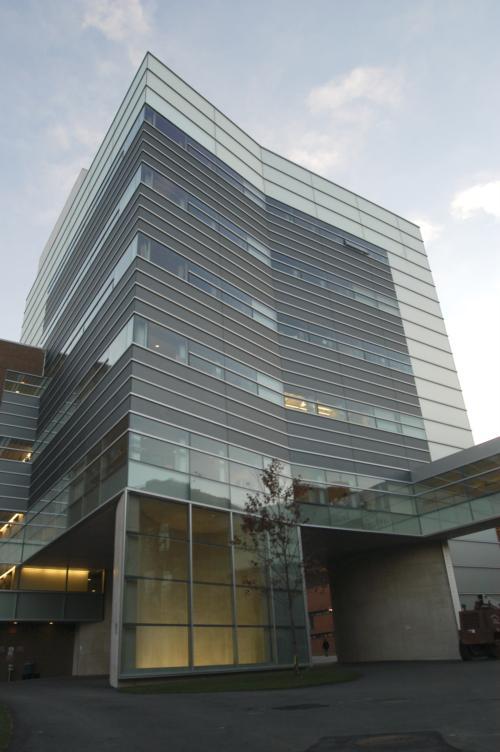 The LISE building, which opened this month and cost $155 million to build, aims to strengthen Harvard’s position in the nanotechnology field.
By Nan Ni, Crimson Staff Writer

Amir Yacoby, an Israeli condensed matter physicist, had a few qualms about moving halfway across the world to join the Faculty at Harvard. Among other factors, he feared the possibility of culture shock and the adjustments his family would have to make after the move.

Then Harvard made the decision a lot easier: Yacoby was promised space in the then-still under construction Laboratory for Integrated Science and Engineering (LISE).

“The facilities in LISE were a great convincing factor,” said Yacoby, known for his study of the behavior of electrons in two-dimensional spaces. “When I was considering my options, I examined places where I could set up the lab I’ve always wanted to set up, and that space was in the LISE building.”

Construction was finally completed earlier this month on the colossal Oxford Street building that houses the science of the very small. By attracting accomplished scientists like Yacoby and fostering collaboration between the sciences, administrators hope that LISE will bring Harvard to the forefront of nanotechnology research.

But scientific preeminence does not come cheaply, and with its $155 million price tag, LISE is no exception. In its planning stages, the project drew criticism for contributing to a projected budget deficit in the Faculty of Arts and Sciences (FAS), and the University has still not secured a primary donor to help pay for the building.

“It is a lot harder to raise money for a building that has already been built,” former Dean of the College Harry R. Lewis ’68 told The Crimson last year.

Though the project was also criticized for siphoning funds away from development in the humanities, science professors across the University have said that the building and other ambitious capital projects are necessary if Harvard wants to retain its position as a premier research institute.
FITTING IN

Situated at the center of Harvard’s scientific campus in Cambridge, the LISE building lies mostly underground, with a wall of glass that allows natural light to permeate the lower floors. In order to maintain the original walkways in the area, the upper portion of the building rests atop three enormous columns. LISE also preserves the lawn of the Music Building, under which now lies the cleanroom—an advanced, temperature-controlled dust-free environment that is one of the building’s most important scientific resources.

Since dust particles are often several time larger than the devices that nanoscientists create, and temperature difference of a fraction of a degree can decrease the precision of an imaging device, LISE’s heavily-filtered 10,000-square foot cleanroom has less than 1,000 particles of dust per cubic foot. A typical urban environment has millions of particles per cubic foot.

Because nanoscale imaging is also very sensitive to vibration, the building incorporates special architecture that isolates the imaging labs from local disturbances, such as the T rumbling underground.

The building seeks to integrate the work of numerous labs by providing open spaces that facilitate the exchange of ideas. The aroma of Peet’s Coffee from the well-stocked café permeates the building, and there are sunlit collaboration areas on the upper floors.

Physics professor Charles M. Marcus said he believes that the many places for discussion in LISE serve as a catalyst for scientific progress.

“Put simply, people are lazy,” Marcus said. “If having a conversation with a colleague is easy, they will do it. If not, they won’t.”

Former Dean of the Faculty Jeremy R. Knowles praised LISE’s design, which was done by renowned Spanish architect and Graduate School of Design professor Rafael Moneo. The design integrates the edifice into the surrounding structures, although Knowles acknowledged that constructing the nanotechnology building in an urban environment added considerably to expenses.

“Because of the architect’s imaginative thinking, the cost was up,” said Knowles, who was involved in the nascent stages of FAS’ $740 building boom that included LISE. “But the only way we can go forward in science is to establish these facilities centrally.”

The total construction cost for LISE looms around $155 million, slightly more than the original projected cost of $152 million, according to FAS Director of Capital Projects Stephen L. Needham.

LISE is the second building completed as part of a broader North Yard science complex, which also includes the Biological Research Infrastructure and the Northwest Science Building.

Knowles announced in 1999 that FAS would invest $200 million to emerging interdisciplinary sciences including nanotechnology and genomics, funds that contributed significantly to the construction of the LISE building.

Defending the decision to go ahead with the project before securing a major donor, Assistant Dean of Campus Design and Planning Nazneen P. Cooper said that the urgency of creating a state-of-the-art space for nanoscience trumped other considerations.

“In general, when we have a project that we have a need for, we will build it whether we have a donor or not,” Cooper said. “In this case, we had a need for the laboratories and cleanroom.”

According to Eric Martin, the technical direct of Harvard's Center for Nanoscale Systems, most elite research schools—including MIT, Stanford, and Cornell—have such a cleanroom, and in some ways, Harvard is a latecomer to the nanotechnology game, although the LISE building should make up for that shortcoming.

“Our LISE cleanroom can be described as being in the top tier of university clean rooms,” Martin said. “If cleanrooms were an NCAA facility, ours is definitely Division I.”

But Michael J. Skvarla, the NanoScale Science and Technology Facility Program Manager at Cornell, said that evaluating facilities across schools is like “comparing apples and oranges.”

“We’re happy that Harvard has its own facilities now, and we look forward to seeing them develop their own area of expertise,” Skvarla said.

As the home of Harvard’s Center for Nanoscale Systems, LISE also plays host to scientists from other schools through a grant from the National Science Foundation. Martin estimated that about 20 non-Harvard researchers use the LISE facilities at any given time.

In addition to maintaining Harvard’s edge as a research institution, Marcus said that the LISE building is also necessary to maintain the quality of education at Harvard.

“The LISE building was expensive because science is expensive,” he says. “If you want to play the big leagues in experimental research, you’ve got to pay to play.”

A LARGE SLICE OF SCIENCE

Responding to those critical of the high expense associated with expanded science research, Knowles is quick to point out that his first investments as dean were to build the Barker Center for the Humanities and the two-building Center for Government and International Studies.

“I think that it’s sadly easy for people who did not need the science facilities to look at them and say, my goodness, that’s a large investment,” Knowles said. “But when looking at the costs, what can you say? If this were the music department, could they buy half a piano?”

While Knowles acknowledged that the North Yard construction projects are “not inexpensive,” he rejected the idea that the funds going into science were constricting the development of other fields.

“My concern was always to have all departments across the landscape be the best they can possibly be,” Knowles said.

African and African American Studies professor Jennifer L. Hochschild said that while she does not know if all the departments are being treated fairly, she does not think that the large price tags attached to science investments necessarily constitute preferential treatment.

“I think that to be treated equally is not the same as spending the same money,” Hochschild said.

“The kind of work that social scientists do just don’t cost as much. I know that I would have a hard time spending $150 million dollars, while these scientists can do it in a few days.”

But, Hochschild said, the offer of a multi-million dollar building for her own pursuits would certainly not be rejected.

Ensconced in his $155 million laboratory building across campus, Yacoby said that though he moved into LISE just a few weeks ago, the building seems well-worth its price so far.

“Everything is technically superior and up-to-date,” Yacoby said. “Exactly what I’d expect from an institution like Harvard.”

—Staff writer Nan Ni will be reached at nni@fas.harvard.edu.