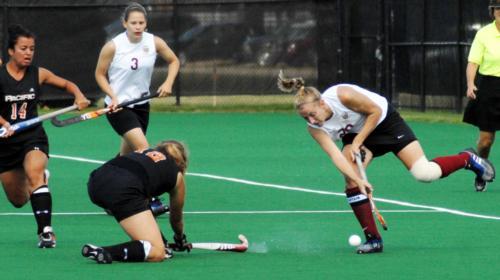 In a close, season-ending battle on Friday night, the Harvard field hockey team fell to Columbia, 2-1, under the lights in New York City.

The loss dropped Harvard (8-9, 4-3 Ivy) from second place to a tie for fourth in the Ivy League.

Coming off four straight league victories, the Lions (11-6, 5-2) started strong, establishing a two-goal lead within the first 20 minutes of play. The Crimson tallied a single goal in the second half but could not quite rally to give Columbia enough of a challenge.

“We were outplayed,” coach Sue Caples said. “Columbia set the pace very early, and we didn’t match it. They played a very disciplined game, and we didn’t generate any sustained attack.”

The lone Harvard tally came off of a penalty corner with less than 15 minutes to go. Co-captain Devon Shapiro drilled the ball into the back of the net after a pass from fellow co-captain Jana Berglund.

Junior forward Tami Jafar put up the Crimson’s only other threatening shot, which served only to earn Lions goalkeeper Gena Miller her single save of the night.

This weekend determined the final Ivy standings, and four teams entered their contests tied for second place with a 4-2 record. Harvard, Columbia, Cornell, and Penn were all battling to secure their ranks and remain in contention for the league title.

Despite each team’s efforts, Princeton’s win over Penn granted the Tigers their third consecutive Ivy title. Princeton finished its season with a 6-1 record and will advance to the NCAA Tournament.

With such bunching at the top of the standings, the Ivy League seems to have improved its level of play since last season.

“In the Ivy League, there was a lot of parity this year, and it is a good testament to the strength of the league and how the league has rebounded from last season,” Caples said. “It’s a good sign for the league that Columbia’s getting good.”

This was the first time in head-to-head history that the Lions triumphed over the Crimson, which held a 10-0 advantage before Friday night.

Not only has the league stepped up its game in 2007, but the Harvard squad has seen greater success this fall than in recent years. Much of this improvement was fueled by senior leadership, headed by co-captains Shapiro and Berglund.

“All four of the seniors have given and brought so much to our program and given us great leadership,” Caples said. “Their work ethic, their commitment to the program has really been tremendous.

“Devon and Jana as captains this year set the example through their work ethic,” she added. “They really pushed the team and challenged the team to perform [to] their individual skill [level] and athleticism, which was a bonus for us…We loved having them.”

Berglund also had positive reflections on the season and the team’s improvements since last year.

“I’m really proud of everyone for working so hard and getting to where we got this year,” Berglund said. “Especially coming from last year, [when] we started with a lot of losses, we came out really strong and kept making improvements throughout the whole season. We had a really good chance in the league until the very end, but that doesn’t dampen what we had before.”

Looking ahead, Caples and the co-captains both foresee continued success with the returning squad.

“I have no regrets,” Berglund reflected. “It’s been a great four years, and I’m excited to see where they go in the next coming years because there is so much talent still on the team.”

“The future looks bright,” Caples added. “We’ve got a lot of work to do ahead of us, but there are some good athletes and players…We hope we can not miss a beat and keep going forward.”