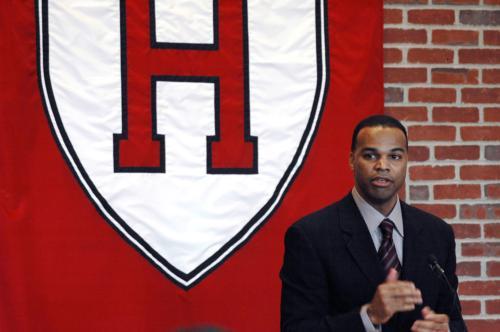 Duke graduate Tommy Amaker, accompanied by his wife, Stephanie Pinder-Amaker, was introduced as Harvard’s new head coach at a press conference on Friday. Amaker has a 177-138 career record in two previous coaching stops, first at Seton Hall and most recen
By Ted Kirby, Crimson Staff Writer

Tommy Amaker was introduced as the new head coach of the Harvard men’s basketball team in a press conference on Friday at the Murr Center lounge in Allston.

“I can’t say how proud I am to be the committee’s selection,” Amaker said as he addressed a room full of Friends of Harvard Basketball, fellow Crimson coaches, representatives of various media outlets, and members of the men’s basketball team.

The former Michigan and Seton Hall coach was accompanied by his wife, Dr. Stephanie Pinder-Amaker.

She was the Associate Dean of Students at the University of Michigan while Amaker coached there.

In his introductory remarks, Nichols Family Director of Athletics Robert L. Scalise connected the beginning of the Amaker era with the foundation of Harvard basketball 107 years ago.

“More than a century later, we are here today with that same optimism, as our program is reborn with one of the best and most respected coaches in the country,” he said.

Amaker had been the head coach at Michigan for the past six years, accumulating a 109-83 record but failing to make the NCAA Tournament before being fired after last season.

Before that, he had been the head coach at Seton Hall for four years, reaching the Sweet Sixteen in 2000.

“I can’t thank you enough for this opportunity,” Amaker said. “I certainly feel like it is going to be a joyous ride.”

He replaces Frank Sullivan, who coached the Crimson for the past 16 seasons.

Sullivan’s contract was not renewed at the end of last season.

During the search process, Scalise met with members of the team to discuss what they wanted in a new coach and possible candidates for the job.

“One of the people who was mentioned was Tommy Amaker,” Scalise said. “I told the team, ‘If you would like me to, I would be happy to call Tommy. I have heard great things about him and would be happy to initiate contact and see if he might be interested in being our basketball coach.’ The guys on the team were instrumental in this happening.”

“After meeting all the candidates, [Amaker] was our top choice, and they got him,” said sophomore point guard Drew Housman.

“About five minutes into the interview, we were on a recruiting mode,” he said.

“We were just so impressed. I mean, obviously the experience and pedigree speak for themselves in the context of basketball, but when you meet the guy, you just find out that he’s the real deal.”

He was offered the job on Monday and accepted on Wednesday.

Amaker is currently the only African-American head coach among Harvard’s 32 head coaches.

The lack of minorities had drawn criticism from the Boston Globe and CBS SportsLine.com, among others, but both Scalise and Amaker denied that race played a role in the hiring decision.

“Once we’ve amassed a candidate pool, then our job is to hire the best possible person for the job—and that’s what we’ve done here.” Scalise said. “Tommy Amaker, that’s a home run, even though we don’t have home runs in basketball. He is someone with stature, and you can just hear in his voice—he’s an educator. His fit with Harvard is outstanding.”

—Staff writer Ted Kirby can be reached at tjkirby@fas.harvard.edu.