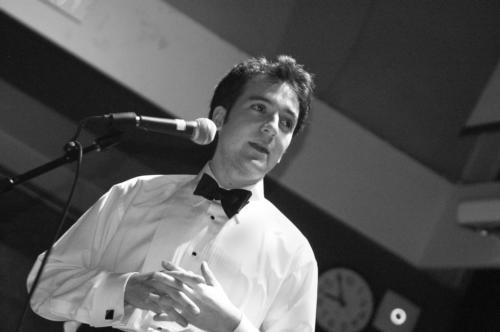 By Mark A. Pacult, Contributing Writer

Joshua M. Brener ’07 may be the only Harvard senior planning to be unemployed after he graduates. The most recent president of Hasty Pudding Theatricals can already spell out what it will be like.

“It will last anywhere from several months to the rest of my life,” he says. “It will happen either in NYC or LA. Regardless, I’m going to be hungry...I don’t know how food stamps work, but I’ll figure that out, I think.”

For Brener, unemployment will mean the chance to write or act for TV or theater, which will be a continuation of what he does on campus.

“I think it’s what theater is really about is that it embraces a lot of the theatrical values that I hold close to my heart,” he says. “You know, life, liberty, the pursuit of comedy...I think really harkening back to Dionysian values is where my heart is.”

For Brener, exploring theater at Harvard has meant involvement with some of the college’s oldest groups, Hasty Pudding Theatricals and the improvisational group On Thin Ice (OTI). “The Hasty Pudding has the advantage of a tremendous amount of history and name recognition,” he says. “It’s by far the most professional experience you can have on this campus.”

“I feel like a pretty big deal in the Pudding,” he adds.

Brener cites OTI as an important part of his time at Harvard as well.

“I think that their origins as an improvisational and a sort of a creative engine is really what has driven me with that group, and certainly the funniest people on campus come out of OTI,” he says.

The funny, forthright senior also credits his work with Sunken Gardens Children’s Theater, an organization that puts on a show for kids every spring, as a major source of enjoyment. “Really important work is what I’d call it,” he says.

While Harvard was not Brener’s first choice, he ultimately came to enjoy his time here.

Brener credits Harvard’s Office for the Arts (OFA) with helping to fuel the campus’s creativity.

“I think the OFA does a good job helping students do the arts that they want to do.”

But ultimately, he says, the continued success of art on campus depends on the initiative of students.

“That’s how those things start: a few kids meeting over a pot of hasty pudding in 1795,” he says.

Though Brener has opted to partcipate in more established theatrical organizations, that hasn’t prevented him from being a trailblazer: last year, he co-wrote the Hasty Pudding Theatricals’ spring show.

“For me, I didn’t need anything else. The HPT is the end all be all,” he says. “There’s a lot to be said about striking out your own and creating something that hasn’t existed for 150 years. I certainly wouldn’t have done that because I like old things.”

Brener’s keeping his options open for the coming years. He says he hopes to “find ways to act or write in TV, theatre, or pornography, especially writing in pornography.”