For Harvard women in the workforce, starting salaries lag behind by $10K 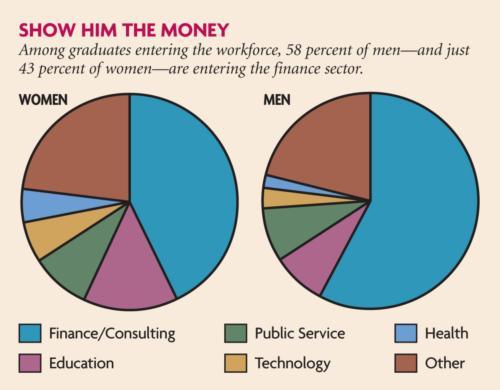 Male Harvard College graduates who are entering the workforce next year will command substantially higher starting salaries than their female classmates, according to results of a survey of 901 seniors conducted by The Crimson.

Part of the gap stems from the fact that males are more likely to enter lucrative sectors such as investment banking. Males also are more likely to graduate with degrees in economics, computer science, and other fields that are attractive to employers. But even controlling for industry sector and academic background, males appear to earn about 8 percent more than their female classmates, according to The Crimson’s analysis.

The Crimson has shared the results of its survey and its statistical analysis with economists and political scientists who specialize in gender issues. Experts agreed that the evidence shows a significant gender gap in first-year wages.

“I think this is important information that warrants attention,” Associate Professor of Public Policy Hannah Riley Bowles, an expert on gender at the Kennedy School, wrote in an e-mail, though she warned that the $10,000 gap “sounds a little high.”

Yet even “small differences in starting salary can have big implications over the course of a career,” Bowles added.

“I think the results look robust,” wrote Torben Iversen, who holds the Burbank professorship of political economy at Harvard and who has written extensively on gender inequality.

“The bottom line is that there are large differences in starting salaries for Harvard grads directly entering the labor market and these differences are correlated with sex,” economics professors Claudia Goldin and Lawrence F. Katz wrote in a joint e-mail to The Crimson.

The Crimson conducted its anonymous questionnaire online using the iCommons polling software. To make sure that no one took the poll more than once, respondents entered their Harvard ID numbers as authentication. In total, more than half of the senior class participated in the poll.

According to the survey results, about 22 percent of graduates are headed straight to graduate school—with men and women continuing onto advanced degree programs at almost identical rates. Exactly half of respondents said they had a job lined up for next year. The difference between men and women in terms of job-finding success was negligible.

But evidence of the gender gap emerged when seniors reported their first-year base salaries. About two-thirds of graduates who have jobs lined up disclosed those figures.

The gap between male and female wages is largest in the technology sector. The median male salary in that industry is $74,000, compared to $50,000 for females.

Within most sectors, the gender gap is actually quite narrow. In banking and consulting, the median salary for men and the median for women are identical.

But women are less likely to have jobs in high-paying sectors lined up post-graduation.

“The big question is why male and female graduates going directly into the labor market end up in different sectors,” Goldin and Katz wrote.

Other experts suggested alternative explanations for the gender gap.

One of the economists who reviewed The Crimson’s data, Linda C. Babcock of Carnegie Mellon University, has found that men are more likely to negotiate their starting salaries, while women are more likely to accept their employer’s first offer. In a study of Carnegie Mellon business school graduates, Babcock found that 57 percent of men “asked for more”—while just 7 percent of women tried to negotiate.

The gender gap is narrowest in sectors that publicize information about starting salaries, according to research by Babcock and the Kennedy School’s Bowles. “So, one thing that career services [at Harvard] could do to help diminish the gap is to provide students with good information about the appropriate compensation standards for the types of jobs they are negotiating,” Bowles wrote in an e-mail.

According to Iversen, another possible explanation for the gender gap is “statistical discrimination.” Employee training can be an expensive endeavor, and companies are fearful that female workers will take leaves of absence for maternity and child-rearing after the training process is over. That might make companies more wary of hiring women. “Controlling for career choices, I believe most of the gender difference in pay is due to statistical discrimination,” Iversen wrote in an e-mail.

“Since most of the gap is due to the way labor markets work, combined with inequality in family responsibilities, it is probably unrealistic to expect Harvard to have a big impact,” according to Iversen. But he added that Harvard “has a responsibility to educate about the underlying causes of gender inequality, which in turn may affect public policies.”

Women in the Class of ’07 say that Harvard-run programs are already making a difference.

Megan E. Barragry ’07, a Social Studies concentrator, applied to the Radcliffe Institute’s Mentor Program as a sophomore, and she was paired with a Class of ’88 alumna who now manages a private food label.

The alumna offered guidance throughout the job hunt, and Barragry has landed a position at a Washington, D.C.-based consulting firm for next year.

Students have launched their own efforts to bridge the gender gap.

Economics concentrator Teresa A. Hsiao ’07 is headed to a financial management training program at General Electric after graduation. But, she said, “I hadn’t really thought about [finance] at all before I got to Harvard”—even though her mother is a financial consultant.

Hsiao observed that men on campus have a head start in terms of financial literacy. She asks rhetorically: “When you’re 10 years old, is your dad talking to you about the Wall Street Journal?” Males, she says, are more likely to talk about stocks at a young age.

Tracy L. Britt ’07, an economics concentrator who is headed to Harvard Business School this fall, says she had “no prior knowledge” of the stock market when she arrived on campus. She grew up on a produce farm in Kansas, and her only interaction with the financial world came from hearing her father talk about soybean futures.

But Britt accumulated first-hand experience in the financial world through summer internships. As a rising junior working at Bank of America, she observed that there was just one woman on a 20- to 30-person cash equities trading floor. “I never felt discriminated against,” Britt says, but she did begin thinking about ways to give women more opportunities in a “male-dominated” industry.

“The biggest thing was just getting women used to the terminology,” Hsiao said. “A lot of people came in who didn’t even know what a stock was.”

In April, members of Smart Woman Securities put their newfound financial acumen to work. With seed money from private donors, they launched a $10,000 investment fund that will be managed entirely by Harvard women—an experience that might make future female graduates of Harvard more likely to seek out finance-sector jobs.

Will efforts like this one encourage more women to enter the investment world, narrowing the gender gap in the long run? As Britt says, “only time will tell.”

-Staff writer Daniel J. Hemel can be reached at hemel@fas.harvard.edu.