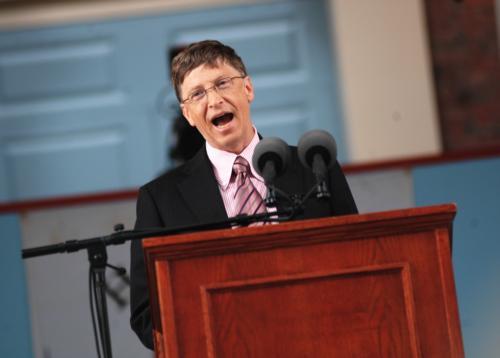 Software mogul and philanthropist Bill Gates returned to the College to address Harvard’s newest graduates and to receive a degree—over 30 years later than the rest of his class.

“I’ve been waiting more than 30 years to say this: “Dad, I always told you I’d come back and get my degree,” Gates remarked at the beginning of his speech.


WHAT WE DON’T READ ABOUT

Echoing a message similar to that of former U.S. President Bill Clinton, Wednesday’s Class Day speaker, Gates encouraged the graduates to look past others’ differences and find innovative solutions to solve inequities present in global societies.

“I hope you will judge yourselves not on your professional accomplishments alone, but also on how well you have addressed the world’s deepest inequities [and] on how well you treated people a world away who have nothing in common with you but their humanity,” the former Currier House resident said.

In his address, which followed a speech by Bok, Gates said that this year’s graduates are in a unique position to enact positive change given the accelerating advancements made possible by technology.

“For a few hours every week, you can use the growing power of the Internet to get informed, find others with the same interests, see the barriers, and find ways to cut through them,” he said.

Gates also said that while it would take decades before vaccine research for diseases—including AIDS—would materialize, efforts can still be made in the meantime to prevent risky behavior in developing parts of the world.

He went on to say that people should continue to pay attention to lingering crises that are often pushed to the background, even if newspapers and television outlets shed little light on them.

“We don’t read much about these deaths,” he said. “The media covers what’s new—and millions of people dying is nothing new.”

Gates told the audience that though it could take years for their efforts to materialize into tangible results, that is no reason to give up hope.

“The crucial thing is to never stop thinking and working—and never do what we did with malaria and tuberculosis in the twentieth century—which is to surrender to complexity and quit,” he said.

“He was very clear in saying you can decide what you want to do, but at some point you should take time out of your busy schedule to look at the world around you,” Asante said.

Gates entered the College in 1973, but dropped out before his junior year to further develop his software business. Though Gates was knowledgeable in subjects he studied at Harvard, he said that he left without realizing some essential facts of life.

“I left Harvard with no real awareness of the awful inequities in the world—the appalling disparities of health, and wealth, and opportunity that condemn millions of people to lives of despair,” he said. “It took me decades to find out.”

However, Gates offered a possible solution for mitigating the global problem.

“We can make market forces work better for the poor if we can develop a more creative capitalism—if we can stretch the reach of market forces so that more people can make a profit, or at least make a living, serving people who are suffering from the worst inequities,” Gates said.

“We also can press governments around the world to spend taxpayer money in ways that better reflect the values of the people who pay the taxes.”

But Gates acknowledged that many people are apathetic about existing inequalities—a problem he has faced since he began his philanthropic work.

“I love getting people excited about software, but why can’t we generate even more excitement for saving lives?” he asked.

Despite this challenge and others, Gates encouraged graduates to devote their time to a cause because of the rewards that society—and the individual—can reap.

“Don’t let complexity stop you. Be activists. Take on the big inequities. It will be one of the great experiences of your lives,” Gates said.

—Staff writer Kevin Zhou can be reached at kzhou@fas.harvard.edu.