Injuries lead to another disappointing weekend for the Crimson 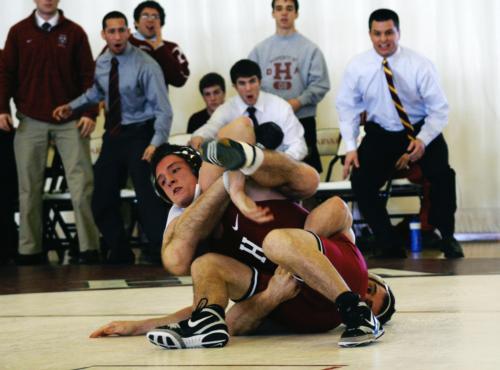 Battling through injuries among four of its top wrestlers, Harvard has been slow out of the gate, dropping its first six matches, including two this past weekend. By Giuliana Vetrano
By Tony D. Qian, Crimson Staff Writer

When things hit rock bottom, there is no way to go but up.

Based on what has happened to the Crimson in the first half of its season, this is perhaps the kind of optimism that the Harvard wrestling team must learn to embrace.

Forced to compete with a lineup that is a far cry from what was expected at season’s start, the Crimson fell to 0-6 after losses to Lehigh and Army this weekend in its home opener at the Malkin Athletic Center.

Caputo, who is ranked ninth in the nation, is expected to be out for the remainder of the season after sustaining an injury three weeks ago at the Lone Star Duals.

Jantzen, who had been wrestling at top form before his injury, is expected to return by the end of the season, but the jury is still out for Preston and Flanagan.

The Crimson’s home opener began Saturday morning, with Harvard going against the Mountain Hawks, and concluded with an afternoon bout versus the Black Knights.

“I’m very proud of the guys out there,” Head Coach Jay Weiss said. “Right now, everyone knows that it’s about the team. I had guys volunteering to wrestle out of [their usual] position. They’re willing to put themselves out on the line, especially considering that [according to NCAA rules] once you move up [into a higher weight class], you have to stay there for the rest of the year.”

Freshman Shay Warren, listed in the roster at 125, had been wrestling at 133 for most of the season. Sophomore Fred Rowsey moved up from 174 to 184 to cover Caputo’s spot.

“These guys know they’re in it together,” Weiss added. “They’ve worked too hard in the preseason to let it fall apart now. It’s been a string of bad luck, but we can’t worry about that. As far as this lineup goes, I’m confident in putting it out against anyone.”

The Crimson started the day against Lehigh (9-11) with a win by fall at 125 lb. It was freshman Dan Kelly’s first collegiate pin. Harvard’s lead was short-lived, however, after a major decision loss at 133 and a forfeit at 141 put the Crimson behind, 6-10.

Sophomore J. P. O’Connor (149), ranked third in the nation, added to his sparkling season record by defeating Trevor Chinn, 7-2, to close the margin to 9-10.

Seniors Bobby Latessa (157) and Matt Button (165) lost their bouts, 6-2 and 6-4, respectively, before junior Patrick Ziemnik fell in a major decision at 174 to put victory out of reach for Harvard.

The Crimson heavyweights were responsible for the best showing on the day with Rowsey and senior Jonathan Butler picking up two wins at 184 and 197, respectively. Sophomore Andrew Knapp lost a close match at heavyweight, 2-1, to end the morning’s competition.

Against Army (10-4), Harvard quickly found itself overmatched and down 0-13, courtesy of two decision losses and a forfeit. O’Connor ended the losing streak with his second victory of the day at 149, increasing his win total to 14.

Latessa and Button followed O’Connor with wins of their own, pulling the Crimson to within four. Latessa recorded a sudden victory in overtime at 157, garnering his seventh victory of the season. Button took a 6-4 decision at 165 and improved to 8-8.

The Black Knights took the final four matches of the day.

The Crimson will continue its home stand next week with a dual meet against Boston University before the Ivy portion of its schedule begins on Feb. 8 against Penn.

—Staff writer Tony D. Qian can be reached at tonyqian@fas.harvard.edu.