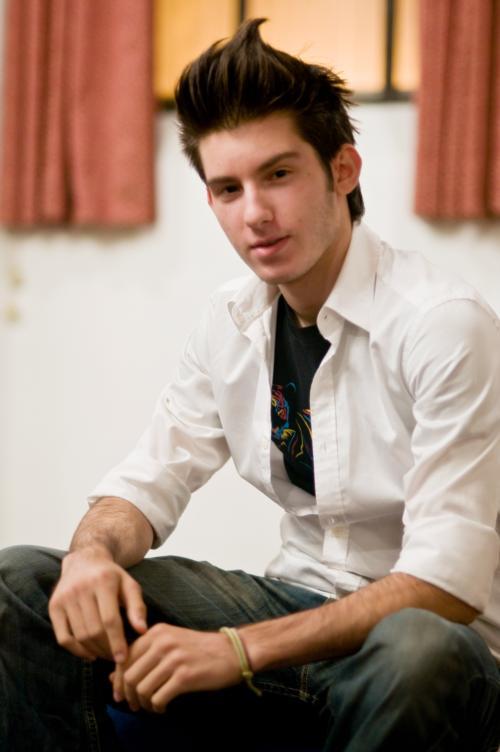 George Zisiadis ’11 didn’t set out to be a movie star.

“I just happened to be in the right place at the right time,” Zisiadis said.

“Frontrunners”—which opened in New York City today and will run at the Brattle Theatre in Harvard Square for a week starting Oct. 24—followed Zisiadis and the three other candidates in the race for president of Stuyvesant High School’s Student Union (SU) in 2006.

When Zisiadis was a junior in high school, filmmakers Caroline Suh and Erika Frankel wanted to make a documentary about the elite New York magnet public school’s SU election. Zisiadis, who had been freshman class president, had thrown his hat into the ring again when filming started in May 2006.

The sophomore in Adams House said it was a bit “surreal” to have cameras following him around for a month.

“I woke up one morning at 6:30 to leave my house, and I found them staked outside my house with camera equipment,” Zisiadis said. But, he added, the filmmakers did their best not to intrude.

While the documentary was not scripted, according to Zisiadis, people who have seen a preview and talked to him after don’t always realize that he was not consciously playing a role.

“The weirdest thing is that people come up to me and say, ‘Great character,’” Zisiadis said. “And I don’t know what to say to that.”

The release of the film is intentionally timed to coincide with the weeks leading up to the national presidential election, according to Zisiadis, setting out to examine the political process from a light-hearted angle.

ROLLING IN THE FRIEND REQUESTS

Zisiadis, who last year wrote a blog about his experience growing a mullet, said that the month leading up to the release has been busy and interesting as people find out about the movie.

Last March “Frontrunners” premiered at South by Southwest, an annual film festival in Austin, Texas. Earlier this month, the movie was screened at The New Yorker Festival—a three-day event in New York featuring writers, artists, intellectuals, and performers—where Zisiadis sat on a panel about the film.

“The tons of Facebook friend requests and private messages have been coming in, which is alternately joyful and disconcerting,” Zisiadis said, explaining that he hoped the movie would not become the way people define him—he didn’t even tell his blockmates about the film.

“I actually found out through one of my listservs,” said Justin R. Butler ’11, Zisiadis’ roommate.

Butler and blockmate Luke L. Sperduto ’11 heard rumors since last year that their blockmate was in a movie of some kind. Sperduto said he thought it was a smaller project that had already come out.

It was not until someone happened to see the trailer for “Frontrunners” on Apple’s Web site that Zisiadis’ friends knew that it was a feature film.

Both Butler and Sperduto said the George they saw in the trailer is the same as the guy they know in real life, just younger. Sperduto said the goofy and outgoing image that shows through is true to Zisiadis now, but he could see areas where his friend had matured in the last few years.

Sperduto added that he is excited to see the movie when it comes to the Square: he still doesn’t know who wins the election in the end.

A MICROCOSM OF THE NATION

The timing of the release of “Frontrunners” is certainly not accidental. Suh and Frankel said they love campaign movies, both citing “The War Room” and “The Perfect Candidate.” They wanted to place their documentary in a context in which it could be funny while at the same time examining the democratic process.

Suh said the SU candidates’ platforms were largely different from their national counterparts’—though both include balancing the budget. But, she added, many of the non-policy issues that have been in focus leading up to next month’s election, such as race, gender, and media bias, also played into Stuyvesant’s student government race.

Vanessa Charubhumi, who was Zisiadis’s running mate and is now a freshman at Johns Hopkins, said that she saw how race was a factor in the campaign but that gender was less of an issue.

REFLECTIONS OF AN EX-CANDIDATE

Two and a half years out, Zisiadis, who at Harvard is active in the juggling club and the Pan-African Dance and Music Ensemble, had some insights about the film. He said he wonders if the similarities between high school and national politics are because students are imitating adult politicians or because adults are acting out what they learned in high school.

“Are we just mirroring the spirit of reaching out to voters?” Zisiadis asked of his high school campaign—or are students also mimicking the nastier parts of grown-up politics?

As for his own strategy, Zisiadis said his campaign was all about visibility. He focused on personal interactions, setting up a “lounge” at his locker and handing out flyers at the top of the pedestrian bridge that students can use to cross above the street and enter the school.

Still, he says it is not the month of campaigning that counts.

“90 percent of the campaign is not the campaign,” he said. Rather, how you treat people all along makes the difference.

Does this mean he plans to go into politics someday? Not necessarily.

“For me at least, there are better ways to change the world,” Zisiadis said.

—Staff writer Chelsea L. Shover can be reached at clshover@fas.harvard.edu.