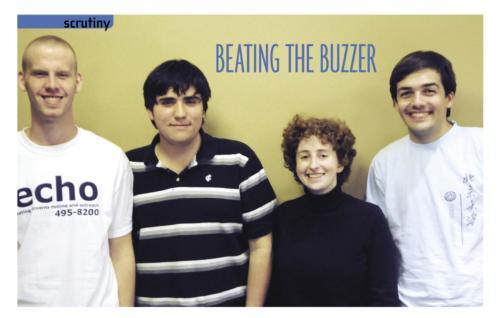 When the Harvard Quiz Bowl team was winning national championships in the mid-1990s, its leader, an English graduate student named
By Christian B. Flow

When the Harvard Quiz Bowl team was winning national championships in the mid-1990s, its leader, an English graduate student named Jeffrey G. Johnson, was the stuff of legends. It was rumored that he had read 10,000 books, and that watching him take in a volume was like witnessing somebody leaf through a magazine.

When I ask Simons about winning a college tournament at Vanderbilt while still in high school, he dwells on the limited size of the field. When I ask why he neglected to tell me that he recently finished first in a scrimmage between the freshmen from MIT and Harvard, he smiles and says nothing. His Straus dorm room is a shrine to the understated.

Reaching across his desk, Simons points to a small model of the buffoonish cartoon character Homer Simpson. “Homer’s there just to remind me to keep it real,” he says.

“I thought that’s why Tupac was there,” says roommate Ronald D. Serko '12 from across the room.

“No, Tupac’s there to keep me from saying something whack,” Simons answers.

The only way to get a real idea of Simons’ talent, without pawing through his high school records, is to see him with a buzzer in his hand—or to listen to others who have.

“I first saw him [as a high schooler] at the Harvard Fall Tournament, and it was already apparent that as a high school player, he was absolutely dominant,” notes the Harvard team’s de facto coach Dennis Loo, a self-described “professional gambler and physics tutor” who played for Virgina Tech in the late-1990s.

Serko says he’s had a few glimpses of what his roommate is capable of.

Serko says that he was able to name William Howard Taft as the 29th president (though in reality, the non-Quiz Bowler names the 27th.) He was also able to recall that Taft was a rather large man. But it was up to Simons to relate that Taft had fired Gifford Pinchot. And authorized the passage of the Payne-Aldrich tariff.

At this point, I’ve already seen Simons in action. I don’t bat an eyelash.