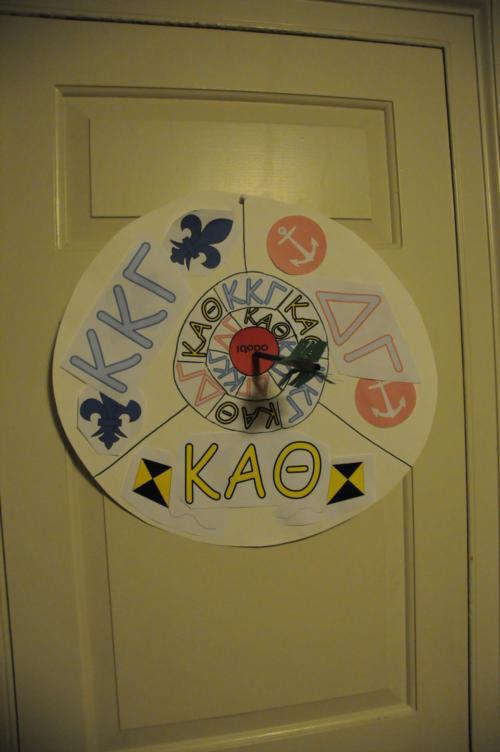 With female final clubs, the Seneca, pre-professional groups like Women in Business, and ethnic groups like South Asian Women’s Collective, it may seem that Harvard’s women are faced with a dizzying array of options in terms of success-driven sisterhood. Why memorize the words to a Kappa Kappa Gamma (Kappa) song when you could be networking your way to Morgan Stanley through Smart Women Securities? Yet every February about 150 girls—smart, modern, and mostly freshman—begin the process of rushing Harvard’s three sororities. The recruitment process is run by the Crimson Panhellenic Council, which is comprised of representatives from each sorority. For two weeks, the sororities woo Prospective New Members (PNMs) with girl talk, sugar cookies, and high-stakes karaoke that will end either in a chorus of high-pitched screams of joy or bitter disappointment.

But at a school where Phi Beta Kappa are the Greek letters on most students’ mind, where do the Kappa Alpha Thetas (Thetas) and Delta Gammas (DGs) fit in?

THE [NOT SO] GREEK LIFE

While groups like Pleiades and Sablière are uniquely Harvard phenomena, all three sororities at Harvard are chapters of large national groups that are also found at state colleges and Southern universities. Despite this affiliation, Harvard’s gates provide a decidedly different environment for its burgeoning Greek scene than the rollicking fraternity row at Ole Miss. Unlike many of their sister chapters, Harvard sororities lack one of the defining elements of sorority life: a house. Out of Harvard’s Hellenic chapters, only the fraternity Sigma Chi has real estate, whereas male final clubs and the Bee own or lease property on campus.

Like final clubs, which became completely privatized in 1984, fraternities and sororities are not officially recognized by Harvard’s administration because they explicitly restrict membership on the basis of gender. This unofficial status, and the astronomical price of Cambridge real estate, limits the presence of Harvard’s Greek scene. While a group like Women in Science at Harvard and Radcliffe can host speakers in the Science Center lecture halls and OAASIS can hold meetings in the Adams UCR, without official university recognition Harvard Kappas, Thetas, and DGs are not permitted to use common campus spaces to host events, put up posters, or hand out flyers outside the Science Center like other student organizations. This leaves sororities dependent on finals clubs and fraternities for space to hold meetings and host events. This obstacle also limits recruitment efforts to Facebook networking, t-shirt advertisements, and word of mouth.

A DIFFERENT KIND OF SISTER

Sorority girls here may be pretty, put-together, and perky, but it would be inaccurate to describe them as a troop of undergraduate incarnations of Elle Woods.

“It wasn’t what I thought Greek or sorority life would be,” said Delta Gamma president Kirstyn H. Knox ’09 of her first glimpse of Harvard sorority life. “I guess Harvard is unique in the sense that sorority life isn’t all the frou-frouing, you know, The Plastics.”

Sorority life on such an ambitious campus is different in other ways, as well. A smaller Greek scene on campus limits the time commitment a PNM can expect to dedicate to her sorority, allowing her to be involved in other activities.

“The great thing about sororities at Harvard is that they don’t have to be your one and only extracurricular,” said former Theta president Alison R. Pipitone ’08. “I have friends who go to school in the South and they don’t have time for anything else because they always have to be in their sorority.”

Sororities claim to offer the kind of sisterhood present only nominally in other all-female campus groups. Rushing a sorority is a completely open process: there’s no comp, girls from every year are welcome to start the process without officially applying, or needing an exclusive invite, as for a female final club. By attending events, PNMs are ostensibly eligible for consideration by any of the three sororities involved in the Panhellenic counsel and get to express their preferences late in the rush process. Sorority girls often cite this process of mutual selection as part of what makes this lifelong sisterhood particularly strong.

Within Harvard’s gates, sororities may seem like fish out of water, but in essence they have the social networking elements that sustain many groups on campus, though Hanger refers to this as simply a perk of the organizations. “It’s the extracurricular that I do because it makes me happy and I enjoy it so much,” she says of Theta. “I don’t do it because it’s going to help me with my professional life. It will, but that’s not why I do it.”