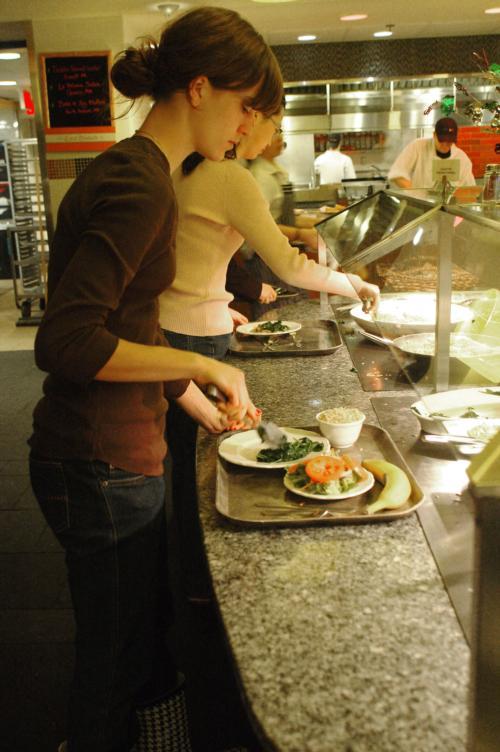 Chiara A. Kovarik ’10 uses a tray to get food in Quincy dining hall. Kovarik said she does not support the trayless initiative.
By Natasha S. Whitney, Crimson Staff Writer

The daily challenge of balancing plates through a bustling dining hall just became a whole lot harder, at least for Quincy residents.

For the month of February, Quincy House will not provide trays during its Thursday community-only dinners, unless a student specifically requests one.

Quincy’s “Trayless Thursdays” came as the result of a collaboration between Quincy House officials and the Resource Efficiency Program, a group that aims to educate students about sustainability.

More than 25 percent of the food produced in the United States, or 96 billion pounds, goes to waste each year, according to Martin.

“With only one plate they will eat a little at a time, and are less likely to waste it,” said Maureen A. Henry, a Quincy dining hall employee.

In order to judge the program’s efficacy, Quincy dining services will perform a waste audit every Thursday night. To set a base standard, they measured waste after last Thursday’s dinner.

Dining services found that 400 diners left a total of 45 pounds on their trays, according to Manny DaCruz, another Quincy dining hall worker.

The others reasons for the elimination of trays is to reduce water and electricity usage, make the atmosphere seem less institutional, and encourage students to eat more slowly and in separate courses, according to Martin.

“We are eager to hear what students have to say,” Martin said, noting that Quincy will provide cards for student feedback.

She added that dining services wants to determine whether this measure should be replicated in other Houses.

The Quincy pilot project comes amidst a recent surge in universities that have removed trays from their cafeterias.

St. Joseph’s College in Maine first introduced trayless dining this fall. Several other colleges and universities, including Middlebury College in Vermont and San Francisco State University, have since followed suit.

Food and drink waste decreased by 30 to 50 percent after Alfred University in New York eliminated trays, according to the school’s Web site.

Despite the trend, some Harvard dining employees doubt that taking trays away will have such a dramatic effect.

“Students will just go back and forth,” DaCruz said. “I have seen plates without trays and the food is still coming.”

Most Quincy residents, however, seem receptive to giving “Trayless Thursdays” a try.

“Getting multiple dishes might be annoying,” Mollie M. Kirk ’08 said. “But I think the program would be a really positive change if it could help stop food waste.”