On Wearing the Right Shoes

How footwear explains why American reconstruction of Iraq went wrong 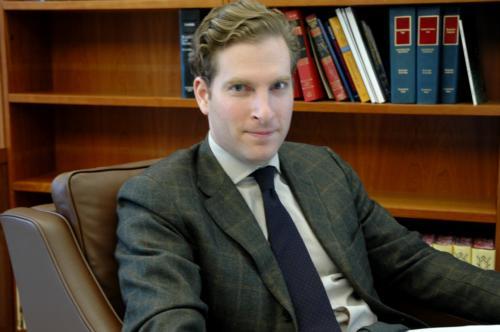 Professor Noah R. Feldman ’92 sits in his office at the Law School last week. The Rhodes Scholar and former Eliot House resident was selected by the Coalitional Provisional Authority to serve as an advisor for the Iraqi constitution.
By Lois E. Beckett, Crimson Staff Writer

Noah R. Feldman ’92 knew he had to get out of the Green Zone.

It was May 2003, and the 33-year-old law professor was working in Baghdad as the sole constitutional adviser to the Coalition Provisional Authority (CPA).

Americans were encouraged not to leave the area secured by American troops.

But Feldman had heard enough about the American administration’s vision for Iraqi democracy. It was time for a reality check.

So he put on a flak jacket and hopped into a Humvee with a group of American soldiers.

At first, the trip into the ordinary neighborhoods of Baghdad seemed like a success. Feldman ended up chatting with a group of Iraqis in a poor Shi’ia area. “Who is the government?” one man asked, and then repeated the question. For a moment, Feldman just looked at him, beginning to get a sense of the enormity of the task ahead.

Then he heard the sound of gunfire. Feldman dropped to the ground.

“Haul ass!” the captain barked as they all scrambled back to the Humvees.

Feldman, now a Harvard Law School professor, described this infamous trip into Baghdad in his book, “What We Owe Iraq: War and the Ethics of Nation Building.”

The 2004 book makes a case for how the United States might responsibly conduct nation building in Iraq—or elsewhere.

In May 2003, Feldman said, he was constantly forced to strike a balance between his duties as a government employee and as an academic, between what seemed best for Iraqis and what his superiors wanted to hear.

Ultimately, his precepts for ethical nation building on the personal level are simple: Make yourself optional. Wear a tie. Think twice before you pair that nice suit with your combat boots.
TENSIONS BY THE TIGRIS

Going out into Baghdad that May to talk with ordinary people, Feldman said in a recent interview, “I had learned more in an hour than I had learned in the previous day or two talking to politicians.”

Returned safely to the Green Zone, he set two goals for himself.

Goal number one, he said, was to get out on the streets of Baghdad, this time alone.

Goal number two, he said, was ”not looking like I had a bumper sticker that said, ‘Shoot me.’”

These were the rules he would live by over the next months. Dressed formally despite the heat, he spent nearly every day talking to Iraqis in the cafes and shops of Baghdad.

It didn’t seem dangerous. At the time, Feldman said, “Baghdad felt to me, in my naivite, not so different from any regular Arabic-speaking city.”

As a Harvard undergraduate, Feldman had lived in Eliot House and majored in Near Eastern Languages and Civilizations. He went on to become a Rhodes Scholar, perfect his Arabic, and become an expert on Islamic law.

After the United States overthrew Saddam Hussein in 2003, Feldman had just the qualifications that would make him come in handy. It didn’t hurt that he believed that Islam and democracy are compatible.

“It would seem very strange to think of academics as a priestly caste who could never dirty our hands through connection with the real world,” Feldman said.

Moving from academia to politics, Feldman said, meant embracing a more “rough and ready reckoning of costs and benefits.”

But academic approaches could also temper the world of politics, he said.

Feldman’s own role in Iraq was often viewed without much nuance.

Some journalists, he wrote in his book, assumed that he would be drafting a new constitution himself and handing it to Iraqis.

And his academic viewpoint did not always make him popular among his colleagues and superiors in the CPA.

“Those who advocated for the war had a pretty strong vision of what Iraq was going to look like, and when I told them things that didn’t correspond with that, they were frustrated with that,” Feldman said.

The big question, he said, was whether Iraq would become a secular democracy. The Department of Defense, he said, believed it would.

Looking at the political history of other countries in the region, Feldman said he believed that was unlikely. But when gave his analysis, some administrators got angry.

“They thought that by predicting this, I was endorsing it,” Feldman said.

He said he remembers responding, “Sir, I’m trying to advise you so you’ll make the right policy decision. You need to know the facts.”

The tensions between Feldman and government officials—particularly his boss, L. Paul Bremer III, the head of the CPA—came down to both style and substance.

Bremmer had become famous for wearing his elegantly tailored suits with combat boots.

Feldman said he interpreted Bremer’s fashion faux pas as a “signal to Americans he was at this place that was at the outpost of civilization.”

“It was very insulting to Iraqis,” he said.

By late June, when Feldman headed back to New York, two things had become clear to him.

The reconstruction of Iraq was already looking “botched,” and he was beginning to feel that he could be more helpful to Iraqis working apart from the U.S. government.

Feldman had spent his time in Iraq establishing contacts with Iraqis across the political spectrum. He offered his contact information to everyone he met. He made it clear that he would be available for consultation as Iraqis readied their interim constitution.

In mid-July, Feldman said, he submitted a letter of resignation to the American government.

As a government employee, he had always felt that the advice he was giving to Iraqis could not be freed from a certain implicit coercion.

He said Iraqis “might not be sure they were free to ignore” the advice he was offer eing.

Feldman said he also felt more comfortable working on his own.

“One things academics have in common with each other is that they’re bad at taking orders.”

Feldman said he was not sure if any Iraqis would call him in New York. But over the next year, as a group of Iraqis appointed to a constitutional committee began to hammer out the first draft of a new code of laws, Feldman found himself as a widely-consulted adviser who was constantly fielding phone calls from Iraq.

He avoided associating himself with one political party, Feldman said. He wanted to be available to anyone taking part in the drafting process.

By the early winter of 2004, Feldman was spending hours every day going over constitutional minutiae with Iraqis. He would field calls from his two-room apartment in Washington while his wife, Jeannie Suk, was clerking for Supreme Court Justice David H. Souter ’61.

“Nobody, myself included, was paying any attention to time differences,” Feldman said. “People were working 22, 23 hours a day and so was I.”

Completed in March 2004, the “Law of Administration for the State of Iraq for the Transitional Period” described Iraq as both an Islamic and a democratic state.

For Feldman, the union of Islam and democracy in a single paragraph was a triumph.

Article 7 of the document noted that “No law that contradicts the universally agreed tenets of Islam” or “the principles of democracy” would be valid under the transitional constitution.

“That’s the part of the constitution that makes me feel proudest,” Feldman said.

The transitional law Feldman advised has been replaced by a new constitution ratified by the Iraqi people in October 2005.

“By the second time around, it was a wholly locally-run process...they were constitutional drafters, and they didn’t need my input,” he said.

But Feldman said he still feels a sense of responsibility for the day-to-day progress of Iraq.

—Staff writer Lois E. Beckett can be reached at lbeckett@fas.harvard.edu.