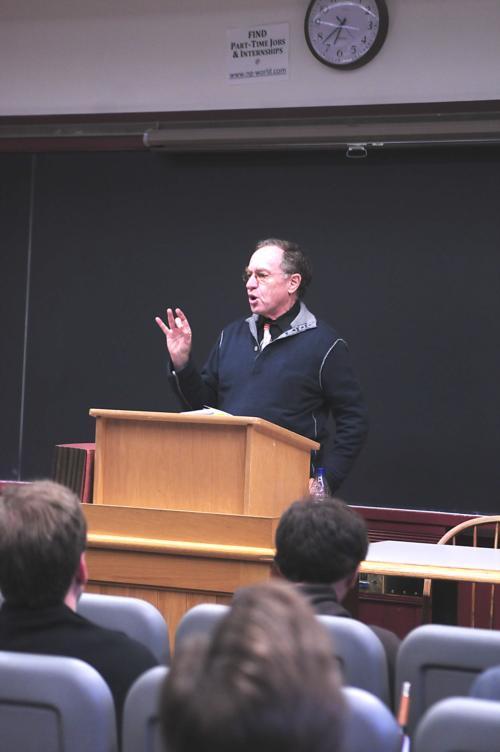 The truth is so alien to the distinguished MIT linguist Noam Chomsky, said Harvard law professor Alan M. Dershowitz, that Chomsky just might be a resident of his own planet—“Planet Chomsky.”

Dershowitz railed against Chomsky’s claims about the Nakba—the Arabic word for what some believe was the forced Palestinian exodus from Israel in 1948 and 1949—in an hour-long discussion last night that was sponsored by Harvard Students for Israel (HSI).

Though Dershowitz and Chomsky—who had spoken at an event an hour earlier—weren’t in the same place last night, the two were engaged in a pseudo-debate because Dershowitz attended the end of Chomsky’s speech and then spent his own seeking to undermine his nemesis, who is an outspoken critic of Israel.

The law professor accused Chomsky, whom he first met in 1948, of “making up facts,” calling the linguist a “Holocaust denier, a denier of history, a denier of reality and the truth.”

Dershowitz’s event was a response to the Chomsky speech, itself part of the “Nakba 101” week that was organized by the Harvard Nakba Committee. Dershowitz said he asked to debate Chomsky, but the committee cited a fixed schedule as reason not to host a debate. Dershowitz called the lack of a debate an “attempt to present their narrative unchallenged.”

Though Dershowitz said he “wants to look forward,” most of his discussion—which attracted about 50 people—focused on the past.

He called the Nakba a “self-inflicted wound” brought on by Palestinian leaders in the 1930s and 1940s, who, he said, refused to accept the existence of a Jewish state when they were offered a two-state compromise.

“Had the Palestinian leadership accepted the two-state solution of 1938, they would have a very large Palestinian land on what is today probably 70 percent of Israel,” Dershowitz said. “And a million Jews would have been saved from the Holocaust.”

Dershowitz said Arab states’ rejection of the resolution has hindered the creation of a Palestinian state.

During the discussion, Dershowitz said he still advocates a two-state solution. He criticized Chomsky’s vision of a bi-national state modelled after Yugoslavia and Lebanon, calling it a “euphemism for the end of Israel as a Jewish state.”

After presenting his own view of the Nakba and related history, Dershowitz answered questions, saying he would only take up questions from audience members who disagreed with him.

Some of the questions took a more personal, and more strident, tone. Robin Zahran, of the Belfer Center for Science and International Affairs at the Kennedy School, said Dershowitz was “as anti-Jew and anti-Israel as they come.”

“You promote nothing but hate, you misconstrue reality,” said Zahran, who is a Palestinian. “You are creating hate between Palestinians and Jews in America.”

Though the discussion was heated, HSI President Jacob M. Victor ’09 called the event a “success.”

“This wasn’t one of our preferred kinds of events,” said Victor, who is also a Crimson editorial writer. “But we felt the decision of the Nakba Committee [to invite Chomsky] was arrogant and underhanded.”