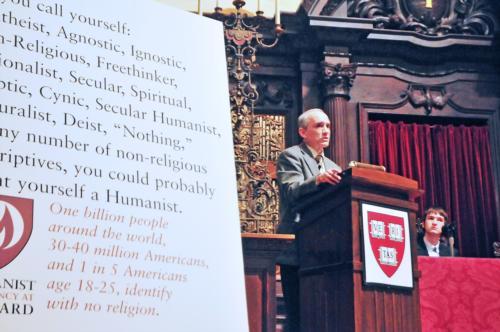 While most associate Memorial Church with Sunday morning services and painfully-early morning bells, last Tuesday night featured a different sort of event in the sanctuary: a debate about God.

The debate featured Dinesh D’Souza, the conservative Roman Catholic writer and speaker, who went head-to-head with preacher-turned-atheist Dan Barker for roughly two hours of discussion on topics ranging from the relationship between science and religion to the ethics of Christianity. Students from the Harvard Secular Society and the Harvard-Radcliffe Christian Fellowship collaborated to write the questions.

The time limits imposed on each response allowed the debaters to address a wide range of issues, but often led to abridged points and half-answered questions. The back-and-forth, however, was impassioned, and became most heated when the speakers addressed one another directly.

At one point in the debate, Barker asked D’Souza, “If God told you to kill me, would you do it?”

D’Souza readily replied, “I would doubt my hearing and interpretative abilities.”

In addition to direct challenges, both sides issued their fair share of bold statements. Barker, for example, declared, “If Jesus were to appear right here, right now, I would believe in him.”

“This isn’t the type of debate they’re used to, so it was a little rough at first,” Ward says.

But given that the purpose of the debate was to provide students the opportunity to ask questions and continue discussion afterwards, both sides considered the night a success. And the limits had another benefit: being pressed for time, the speakers threw out plenty of memorable one-liners.

“If a hole appears in the ceiling, and suddenly I’m the only one left standing, you’ll know why,” D’Souza joked.