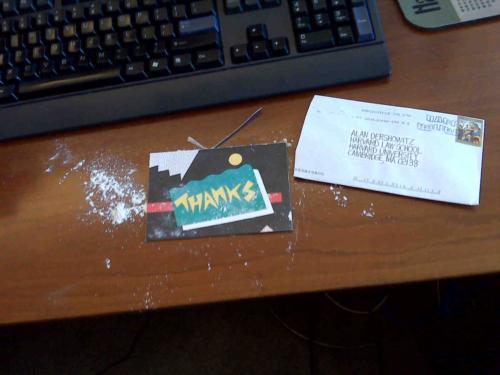 Alan M. Dershowitz's office received an envelope (above) this morning containing a suspicious white powder. Federal authorities were brought in to investigate the substance to determine if it was a threat.
By June Q. Wu, Crimson Staff Writer

An envelope containing unidentified white powder was delivered to the office of Harvard Law Professor Alan M. Dershowitz on the fifth floor of the Law School's Hauser Hall this morning.

His assistant, Sarah Neely, noticed small white specks falling onto her desk as she slit open the envelope, which had “Alan” scrawled on the flap and contained a blank thank-you card.

“I had it all over my hands—the whole envelope was full of it,” Neely said.

Authorities have determined that the powder tested negative for anthrax, and an e-mail sent to the law school community said "there is no indication that the material is hazardous." But authorities will not be able to confirm the powder's chemical makeup for another few days, when final lab results are in, Neely said.

Thirteen envelopes—which contained a similar white powder and also bore a postmark from Knoxville, Tenn.—were received at the Wall Street Journal's headquarters in New York this morning, according to numerous media reports. The Journal published an opinion piece on Jan. 2 in which Dershowitz, who is one of Israel’s most prominent defenders, supported Israel’s military actions in Gaza.

Dershowitz receives hate mail on a daily basis; his office is the only one at the Law School with bulletproof windows, Neely added.

“I sort of made a joke about it at first—the hate mail we get is pretty ridiculous,” Neely said, explaining that she often fields calls from people telling Dershowitz that he will “rot in hell.”

But once she and her coworkers realized that the powder might constitute a serious threat to her safety, she immediately contacted the University police. Within the hour, the Cambridge police and fire departments along with the University’s Environmental Health and Safety team had arrived and sealed off the fifth floor.

When Neely got off the phone with Dershowitz—who is on sabbatical and currently off campus—Dershowitz immediately contacted the Department of Homeland Security and the Federal Bureau of Investigation with his concerns, Neely said.

Two years ago, Neely said that Dershowitz received a life-threatening message, and FBI escorts trailed him for the following week to ensure his safety.

In an e-mail sent to the Law School community yesterday afternoon, Dean for Administration Francis X. McCrossan requested that “anyone intending to study or conduct business in Hauser not do so until further notice.”

Classes held in the building for the day were also rescheduled.

McCrossan wrote in a second e-mail this evening that law enforcement authorities have cleared the building for re-entry tomorrow at 7 a.m.

—Staff writer June Q. Wu can be reached at junewu@fas.harvard.edu.