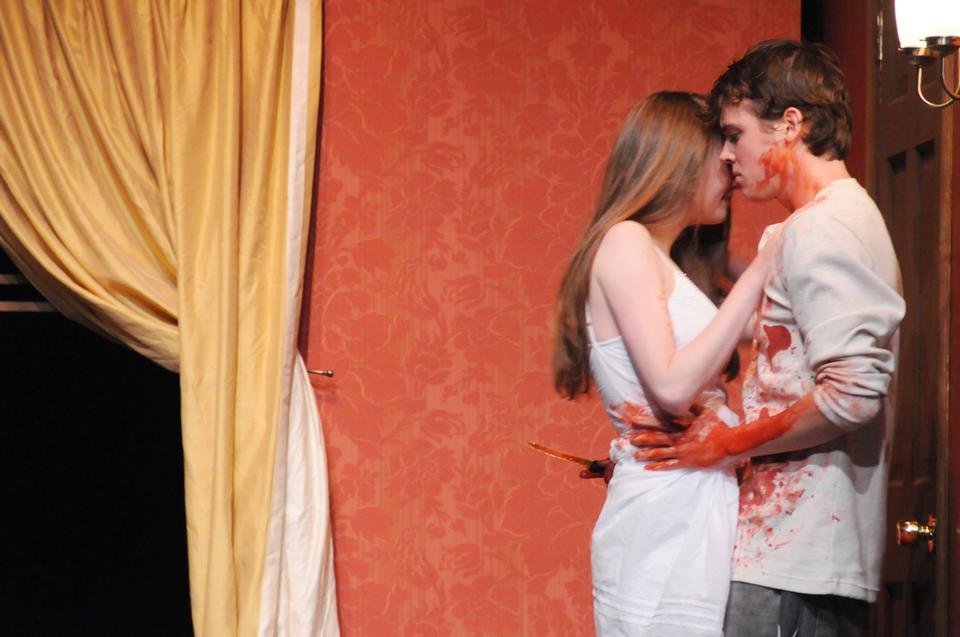 Orestes (Jack Cutmore-Scott ’10) and Electra (Carolyn Holding ’10) embrace after the murder of their mother, Clytemenstra (Tali Friedman ’10) and stepfather, Aegistheus (Chris Carothers ’11). “The Flies,” directed by Geordie F. Broadwater ’04, will run on the Loeb Mainstage until Oct. 24.
By Shijung Kim, Contributing Writer

“When freedom lights the beacon in a man’s heart, gods are powerless against him,” Zeus says in Jean-Paul Sartre’s play “The Flies.” Through the Electra myth, Sartre’s work skillfully explores notions of free will and human essence. This mélange of existentialism and Greek mythology would have been unremarkable to the 20th century audience for whom the play was written. But redefined within the contours of the 21st century—as the Harvard Radcliffe Dramatic Club’s production which opened this Friday demonstrates—“The Flies” becomes incredibly more complex.

There is no doubt that Sartre’s original adaptation of the Greek mythology is brilliant. The play tells the story of Orestes and his sister. After an affair between their mother Clytemnestra and her lover Aegisthus results in the death of their father Agamemnon, the siblings avenge him by killing the responsible couple, who had taken over the kingdom of Argos, imposing their guilt upon the people in the form of perpetual mourning and black clothing. Sartre cleverly ties this in with existentialism. The guilt does not belong to the people but they are forced to express it. By mourning, the people no longer conceive the world through their own minds but through those of others. Through allegory, Sartre criticizes the people of his epoch trapped by religion and social norms. “Eyes so intent on me, they forget to look into themselves,” Zeus says. Such people cannot light the beacon within themselves.

Successfully adapting this chef d’oeuvre for the 21st century is one of greatest challenges for Geordie F. Broadwater ’04, the director, and his collaborators. Most obviously, they modified the dialogue, adding humor and irony to the first three quarters of the play. Teenage jargon—“dude,” “you’re so hot”—was inserted into some lighthearted scenes. Though the play can be funny, at times the alternating philosophy and humor becomes too obvious; the audience knows that a joke is coming, and naturally the joke isn’t funny anymore. Notably the scene where the three Furies parodied contemporary teenage anguish was over-the-top and far too long. To make matters worse, it seemed to have no real point. Despite the occasional slip, however, the dialogue flows considerably well and sounds convincingly contemporary.

Visually, “The Flies” plays it safe under the direction of M. Amelia Muller ’11. No sets and props are impressive or revolutionary, but their symmetry, harmonious colors, and moderate lighting render them all pleasant. The shadow silhouettes on the background wall are effectively executed; the visual factors of the play remain fairly quiet as well, never detracting from the action on stage, save for one moment. In an unfortunate set decision, the barricade blocking the entrance of the cave to hell goes flying, awkwardly disrupting the rhythm of the show. But unlike the soundtrack of “The Flies,” it was a forgivable error.

The music accompanying the play was poorly handled. Near the end of the play, the odd inspirational music during Zeus’ soliloquy on free people almost entirely drowns him out. Kurt Cobain’s musical appearance was another lamentable moment. The 90s rock star’s voice was distracting, not to mention, incongruous to the play’s mood. One was reminded that more casual doesn’t mean more modern.

“The Flies” does have redeeming qualities, though. As a result of Muller’s careful direction, the Furies jump around the stage in perfect, spastic coordination; two of Aegisthus’ men blind one another in a flashlight duel resembling that of a good Rosencrantz and Guildenstern staging.

In the end, “The Flies”—which will play until Oct. 24—is worth the two hours and a half. The existentialist questions that it poses are poignant, and the production functions well enough to successfully deliver them.