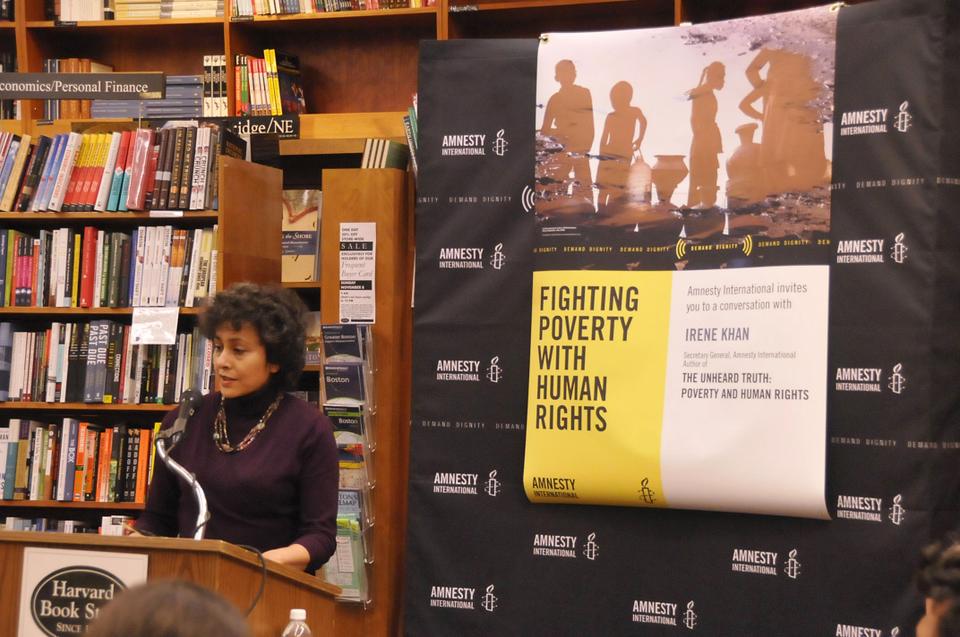 Secretary General of Amnesty International Irene Z. Khan said at the Harvard Book Store yesterday that poverty should be considered a serious human rights violation, rather than simply an economic status, a view that she said goes against traditional perceptions of poverty.

“We invited Irene because she is an incredibly influential member of the human rights field but also to celebrate the work of an alum in the field,” said Michael A. Jones, the communications director of the Program.

During her talk, Khan cited examples from around the world to support her main point—that economic and social rights are inextricably intertwined with political and civil ones.

Khan told the audience about Rosie, a South African woman who was beaten to death by her husband despite domestic violence safeguards in the country. Khan said that when she asked the police why Rosie did not get an order of protection from the courts, they responded that Rosie could not afford the bus fare to get to a court.

Khan said that people like Rosie “need a holistic and comprehensive view and approach to human rights. One right is not enough when their security and stability are threatened.”

In an effort to help those living in poverty, Khan said Amnesty International is broadening its scope to include prisoners of poverty and discrimination as well as “prisoners of conscience.” The organization just announced their “Demanding Dignity” campaign, which seeks to eradicate poverty by empowering people to reclaim their voice from those who repress them, Khan said.

Amnesty International USA’s Northeast Regional Director Joshua M. Rubenstein said that while the organization expects backlash in response to its new stance, it is an important step in eradicating poverty.

“You need that civil and political right to defend the social and economic one. You need one to promote and defend the other,” Rubenstein said.

Both Khan and Rubenstein said they are also optimistic about the new political climate. Khan cited United Nations Secretary General Ban Ki-moon’s endorsement of the Demanding Dignity campaign and his commitment to ending poverty by 2015 as a Millennium Development Goal.

“We now have an administration that is channeling the Roosevelt administration, which produced the belief that people have the rights to be free of fear and free of want. Fear and want stem from social and economic issues,” Rubenstein said. “It’s encouraging that there is this American tradition to draw from.”