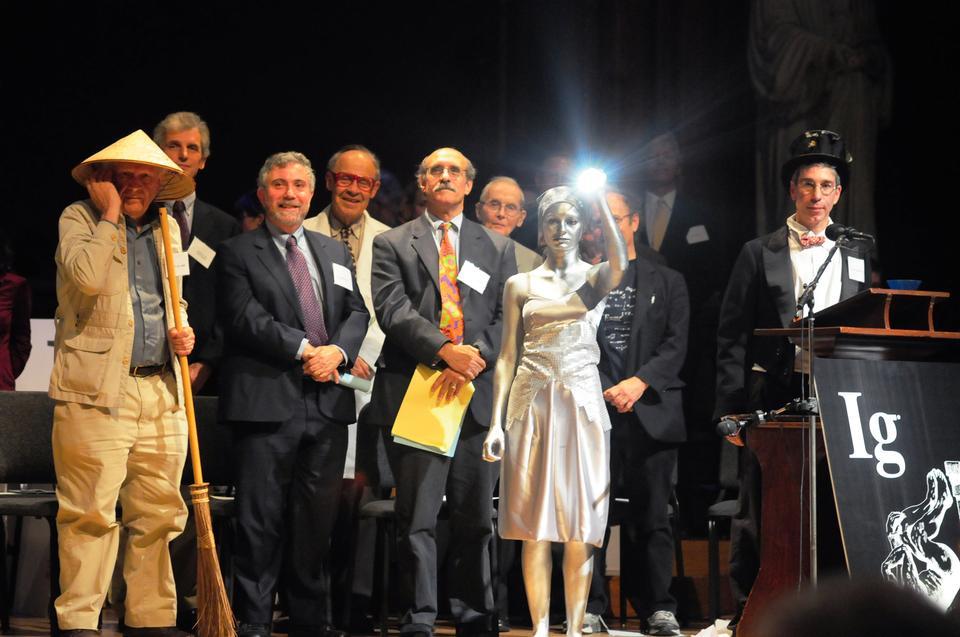 This year’s Ig Nobel Prize winners gathered for an evening of funny and thought-provoking speeches at MIT on Saturday afternoon for the Ig Nobel Prize lectures.

The informal lectures followed Thursday’s 19th annual Ig Nobel Prize Ceremony, but added a new twist to the quirky distinction.Joined on stage by a young child identified only as “Miss Sweetie Poo,” the speakers were routinely interrupted approximately five minutes into their speeches by the girls’s cries of “Please stop, I’m bored!”

For the event’s signature feature, an official time keeper activated a chain of elbow nudges from within the audience which finally culminated with Miss Sweetie Poo’s comical exclamation just seconds later.

During the event, each winner or winning team gave the audience insights into the logistics and implications of their research.Projects ranged from the effect of naming cows on their milk production to determining whether it is better to be hit with a full bottle of beer or an empty bottle during a fight.

Elena N. Bodnar, one of the winners of the Public Health prize, gave a talk entitled “Convertible Bra Mask—Life Saving Lingerie” where she described her invention of a brassiere that can be converted into two gas masks in an emergency. According to Bodnar, technology can be manufactured without affecting the product’s original function.

After each presentation the winners answered both serious and silly questions from the audience. “How much tequila do I have to give to my boyfriend in order to receive a diamond?” one audience member asked Javier Morales, Miguel Apatiga and Victor M. Castano of the Universidad Nacional Autonoma de Mexico, the winners of the Chemistry prize who had discovered how to convert tequila into diamonds.

Several members of the audience said that they were left with the impression that the research, though entertainingly presented, held serious potential for the advancement of particular fields.

“It was hilarious but it got you thinking,” said Roberto Melendez, a sophomore at MIT, who attended the lectures. “Some prizes may have been for fun but others actually have practical uses.”

Hanna L. Luchnikava, another audience member, said that she thought the discoveries had “serious implications,” for further research in many areas.

“It was good that it was presented in a fun way,” she added.