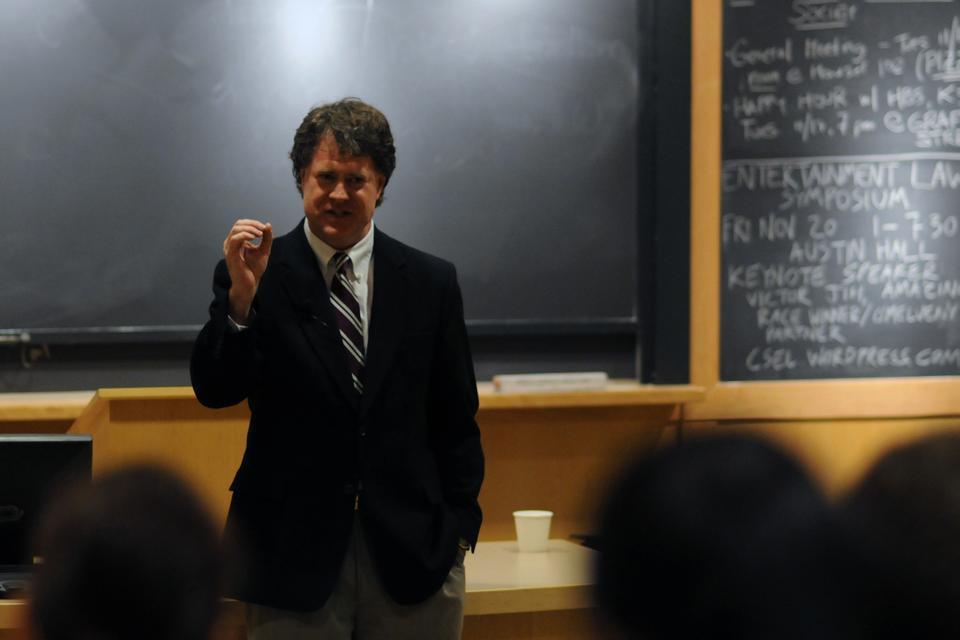 Baylor law professor Mark Osler gives a talk on the history of crack cocaine and its impact on the legal system at the Harvard Law School.
By Gautam S. Kumar, Contributing Writer

Baylor University Law Professor Mark W. Osler delivered a litany of criticism against the American approach to prosecuting cocaine-related charges before an audience of students at Harvard Law School yesterday.

He said that the government should instead focus on stemming imports of powdered cocaine.

“The people getting the money are the culpable ones, yet they’re not the ones carrying the crack,” Osler said.

The legal expert also criticized the Drug Enforcement Administration (DEA) for its “oversized budget” and its excessive street presence, which he said has failed to shrink the market for crack cocaine.

“It’s simple supply and demand,” he said. “We put more agents on the streets, and we saw that doing so didn’t decrease drug trade.”

Osler instead advocated polices that would prosecute those who organize the trade of powder cocaine.

If the government were to pursue those businessmen, the amount of imported powdered cocaine would decrease, lowering the amount of crack on American streets, he said.

“Why go after somebody at the top, whom you may not even get, when you can easily get somebody for five years for carrying five grams of crack?” Osler asked.

Osler said that he was working on new laws for computing drug sentences.

A particular target, he said, is a federal provision under which possession of a given amount of crack cocaine triggers the same mandatory minimum sentence as possession of 100 times as much powdered cocaine.

That provision was part of the Sentencing Reform Act of 1984 and was mandatory until a set of mid-2000 Supreme Court rulings, but the guideline still bears on federal sentencing decisions.

The Law School chapter of the NAACP organized and sponsored the lecture.

James A. Nortey, a second-year student at the Law School and a member of the chapter, said Osler’s visit was part of an attempt to build awareness of criminal justice issues.